Originally released in Japan as Ka: Yamada-ke No Natsu, Mister Mosquito: Summer at the Yamada Residence has a pretty bizarre premise. As the rambunctious insect, you must pester the Yamada family for an entire summer, making them incredibly itchy by sucking up their blood and hopefully storing up enough life-giving plasma to survive the coming winter. Mr. Mosquito's innovative qualities come in many forms; by controlling such a diminutive creature, you get a firsthand view at the world from a new perspective, as well as a humorous parody of many of the standbys of Japanese popular culture.

Mr. Mosquito's quest is played out in a dozen stages, each taking place in one of the rooms of the Yamada home and inhabiting one of their endearing family members. The Yamada family is a rather odd bunch, composed of a stereotypical salaryman, his devoted wife, and their trendy young daughter. As your continued efforts send them into scratching fits, the family's relationship begins to break down, and the game descends closer and closer toward the brink of insanity. The voice work accompanying these personalities has been translated to English, although the odd dub-quality pacing has remained--there are plenty of awkward pauses, and the inflections used by the voice actors in their portrayals are a bizarre mix of heavily accented Japanese, European, and American chic. While the entire storytelling process in Mister Mosquito is most definitely odd, it's appealing in the same way that watching classic Japanese monster movies with poor voice-overs can be--the game's ridiculous story and characters are assuredly a conscious decision on the developers' behalf.

Mr. Mosquito, the courageous protagonist of this adventure, is a capable character, able to fly at a steady pace, hover in place, turn smoothly or in quick 180 degree bursts, and also shoot forth with a quick burst of speed--either to bump into interactive environments or reach a prime bloodsucking point on one of the unlucky Yamadas. Areas in each room of the home, or spots on the family's bodies where blood can be sucked, are highlighted by targeting box outlines, much like objectives would be in a standard flight sim/shooter. Pressing the circle button makes Mr. Mosquito dash forward, which can do a number of things, such as turn off a radio, flick a light switch, click a remote control, or land on human skin. Interacting with these objects causes the Yamadas to react, thus exposing tender bits of flesh, where the blood can be extracted. When you're ready to proceed with blood extraction, a secondary window appears on the screen, depicting Mr. Mosquito piercing the skin and sucking up the blood in cartoon fashion. To suck blood, you rotate the right analog stick--but you must rotate it at a specific pace, as depicted by a vertical meter with a moving blue highlight. Stay outside of the highlighted area by rotating too slow or too fast, and you may irritate the victim and receive a killing swat. To let you know whether or not you're safe enough to continue filling up tanks of blood, an EKG meter gives you clear indication of the family member's irritation levels and gives you ample warning to dislodge and flee, although the temptation to suck that last bit of blood can be quite strong.

In addition to simply filling up the required amounts of blood to fulfill each objective, there are a fair number of other things that can be done to get the most out of Mr. Mosquito's otherwise brief offerings. Hidden in each level are extra tanks that, if found and filled with blood, better assure your survival in the coming winter. These tanks are usually tucked away behind the game's geometry, like behind a couch or in between stacks of goods in a storage room. Also strewn throughout each stage are heart rings, the collecting of which extends Mr. Mosquito's heart gauges, thus making the later stages more survivable. You can also find hidden food icons, such as bananas and watermelons, which count toward the percentage of hidden items throughout the game.

Most significant are the battles you have to fight against the Yamada family members when they have been alerted to your presence. They will swat at you, use a ton of insecticides, and basically go to great lengths to try to end your existence. Your defense against these comparable giants are certain pressure points on their bodies that you can hit, which causes them to relax or even faint. These battles are quite fun--these scenes make frequent use of a slow-motion blur effect when being attacked, and defeating them within the required time unlocks an additional color for your mosquito.

Further solidifying Mister Mosquito as a definitive Japanese-flavored game is the quirky hidden minigame, which you can play by rotating the right analog stick a few times at the title screen. Two players take control of Mr. Yamada clones, each wearing sweatshirts and riding on a bicycle, and the objective is to bump your counterpart off the top of an infinitely tall tower.

Despite its quirky nature and comical appeal, there is a single, highly annoying aspect of Mister Mosquito, which detracts from the overall experience--its poor collision detection. The fairly serious collision-detection issues are problems throughout the game, which can leave some players feeling quite frustrated. Bumping into walls covered with insecticide and taking damage when you were clearly an inch or two away can be infuriating, as can getting swatted by one of the family members when you're absolutely sure you avoided the impact. Erring on the side of caution is a necessity, as fine-tuned control is difficult to achieve at times.

The music accompanying Mr. Mosquito's exploits is generally enjoyable and is composed of an eclectic mix of guitar-heavy rock tracks, smooth, relaxing jazzy tunes, and a number of other funky mixes--there's a large sampling of music in the game, although each song is a fairly generic example of its respective genre. The sucking sound effects, the brief Yamada voice clips they treat you with during each stage, and the calm, almost surreal narrator's voice are all entertaining, although not conventionally so--in fact, as a general rule, what players get out of the Mister Mosquito experience is entirely subjective and could well differ from player to player, depending upon their predisposition toward off-kilter humor and Japanese pop-culture references.

Mister Mosquito is a thoroughly original title that brings to a new audience, through parody, a touch of what makes Japanese culture so appealing to so many Westerners. It's an extremely brief romp, but some of the later stages do provide some challenge. There is some replay value once you've completed the game, but most players can probably get all they need out of this game from a rental. For those players who want a truly quirky game for their PS2 and aren't quite ready to dive head-on into the import game market, then Mister Mosquito is worth a second look. 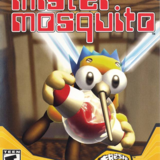 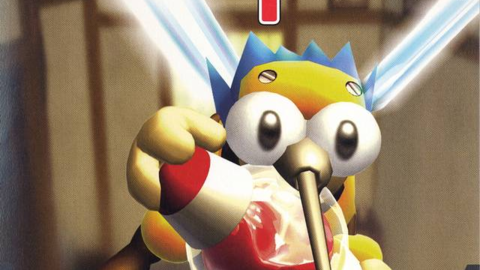