This revamp of a GameCube-era classic is a worthy outing that delivers colorful, creative puzzle action.

In the late '90s and early aughts, a little fellow named Mr. Driller burrowed his way into the hearts of puzzle game fans worldwide. The years that followed saw several Mr. Driller releases across multiple platforms, but after a while, Namco seemed content to entomb the series and focus on other things. Now, a little over a decade later, Bandai-Namco has decided to unearth one of the most beloved Mr. Driller games, the formerly Japan-and-Europe-exclusive Mr. Driller Drill Land, to release on Switch and PC for a new generation of fans to enjoy.

Mr. Driller Drill Land focuses on the titular Mr. Driller, aka Susumu Hori, and his extended gang of excavator friends and family (including his dad Taizo, who you might remember from Dig Dug). They're off to visit a new underground amusement park called Drill Land, filled with attractions that very coincidentally are based around the colored-block-drilling gameplay that defines the Mr. Driller series--with some notable twists. Challenges, cards, and plenty of collectibles abound in Drill Land, and you'll have to see if you have the chops to conquer each of the park's different attractions for high scores and goodies. (And you might just save the world, too.)

The core Mr. Driller gameplay is a neat twist on the "falling colored blocks" idea. You control Susumu (or one of his companions), using your drill to break up colored blocks and dig deeper and deeper into the earth. As you destroy blocks and work your way into the earth, you'll free up other blocks, which will fall and join up with (and also break) others of the same color. Your goal is to reach a certain depth, but that's easier said than done--you have a limited air supply that acts as a timer, and some poor drilling choices could lead to your driller getting smooshed under a landslide. This makes the game a tense, careful balancing act--while air pickups are frequently available, being too hasty with your drilling decisions when oxygen is limited could lead to disaster. It might sound intimidating, but it's much easier to understand once you play a few sessions and see for yourself how loose blocks fall, combine, and break. After you grasp the basics, you'll grow into a groove and skillfully obtain pickups, create chains to eliminate lots of blocks at once, and find safe spots among a cascade of falling earth.

The delicate balance between needing to progress, managing your air supply, and figuring out how to stay safe as more and more rocks teeter above is what makes Mr. Driller such a delightful little puzzle game on its own. What makes Mr. Driller Drill Land so good is how it creates several unique variants on this formula through the different attractions, each with a fun and unique theme. World Drill Tour is the standard Mr. Driller gameplay fans know and love combined with visuals and music that poke fun at a certain famous Disneyland staple. Star Driller adds random power-ups with a variety of effects into the mix in a space adventure--though sometimes the pickups can hurt more than they help.

The three attractions that cleverly augment the core formula are the most enjoyable. Horror Night House does away with the air-timer mechanic, replacing it with a health meter, and has you surrounded by ghosts that possess colored blocks. Drilling into a possessed block (or standing next to a ghost for too long) will result in losing health. The only way to progress is by collecting holy water, injecting it into blocks, and then drilling into the stunned ghosts to destroy them, transforming the game into a tense strategic battle. Drindy Adventure is a hazard-filled archeological dig to nab golden artifacts, complete with spike traps, rolling boulders, and fire-breathing idols to augment the ever-present threat of being crushed--which is more likely, since falling blocks behave differently. Finally, The Hole of Druaga pays homage to one of Namco's most influential titles through a unique rogue-lite spin. In this mode, you must explore a block-filled maze, collect items, eliminate foes, and eventually enter a chamber where you fight the evil Druaga--but be careful, because HP is limited and it drains with every drill you make.

Each attraction has three difficulty levels, all of which are a significant step-up in challenge over the previous level. While you only need to finish Level 1 of each attraction to open the final stage and finish the game, there are plenty of reasons to go back and try each on higher difficulties: extra audiovisual flourishes, new traps, new items, more enemies, and increasingly complex areas to dig into. If you ever feel stuck on a particular attraction, you can always scoot over to the store and use your in-game currency to buy helpful items like extra lives and protective gear. You can use these items freely to push through a challenging attraction and get credit for clearing it, but you won't be able to register your score on the online rankings, which is a fair trade-off. If you don't want to buy these items, you can instead get cards and collectibles that let you learn more about the surprisingly in-depth universe of Mr. Driller… which the overly-long cutscenes don't really succeed at. These Flash-style animations look cute, but the jokes fall completely flat. Even worse, you can't manually advance dialogue -- only skip them entirely. (Then again, you aren't missing much if you do.)

It's not hard to see what's made Mr. Driller Drill Land so beloved over the years. The various spins on the core Mr. Driller gameplay are all unique, challenging, and engaging -- easy to jump into, quick to play, and encouraging you to give it one more go. The sharply cute, early-aughts anime visual style gives it a bright, cheerful look that stands out from the pack, and the bouncy, dynamic soundtrack adds a lot of atmosphere to your deep dives. With so much to choose from and collect, you'll want to master everything--or just play your favorite attraction for hours on end--and earn plenty of money to spend at the gift shop.

Mr. Driller Drill Land is the kind of game you can play for 10 minutes on a lunch break or for an entire afternoon. It's the sort of game where you'll be in a groove… only to screw up a section catastrophically and ruin a run. But you'll only be bitter about it for a minute before eagerly diving back in to try again. If you've never played Mr. Driller--or if it's been a while since you and Susumu went excavating together--Mr. Driller Drill Land is one relic that deserves a spot in your gaming museum. 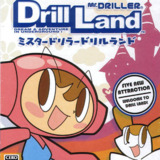 Heidi remembers first seeing Mr. Driller in arcades during the late '90s. For this review, she played the game on Classic difficulty for around 10 hours. She's still trying to beat some of the level 2 and 3 challenges without items, but she thinks she's pretty darn good at Horror Night House at least! Review code was provided by the publisher.