Gunpowder brings more tactical options to the fun and interesting Mount & Blade: With Fire and Sword.

The medieval world of Mount & Blade gets a little more modern in With Fire and Sword. This sequel from developer TaleWorlds adds guns to the cavalry charges and other derring-do to this growing franchise, altering the landscape just enough to provide series veterans with new challenges. When you toss in a new historical setting and a more orderly campaign with structured missions that play out similarly to those in traditional role-playing games, you have a sharp sequel that will hook you for many, many hours.

A realistic campaign setting is the most immediately noticeable twist in With Fire and Sword. In contrast to the original Mount & Blade from 2009 and its 2010 follow-up Warband, the new game shifts the focus to Eastern Europe in the 17th century. Some of the plot and characters are based on historical events and people in the Polish-Lithuanian Commonwealth during the Khmelnytsky Uprising. But don't worry if you've never heard of that; you don't need a history degree to understand what's going on here. As with the first two Mount & Blade games, you play as a mercenary wandering the land, looking for fame, fortune, and some people to trample under the hooves of your fine Arab charger. The only real difference is that you're now dealing with the likes of Poles and Muscovites instead of the inhabitants of the fictional Calradia. Nothing looks more realistic, however. The game uses the same dated graphics engine of its two forebears, which means you're still stuck with chunky player models, a travel map that looks more like the greens at the local mini-putt than topography, and an awkward, text-heavy interface.

So most of the gameplay and interactions are similar if not identical to those found in the previous games. The plot is easier to grasp, however; the focus is on five familiar historical factions. Now, instead of wandering in a totally freeform style, you can head to the nearest hamlet or town on the main map and accept faction-specific jobs right away to deal with taxes, keep the peace between feuding lords, and so forth. This lets you get right to the point and build a mercenary career posthaste. Some adjustments have also been made to financial matters. You can now establish highly profitable caravans (also defensible by moving them into wagon forts for those times you're attacked by highwaymen) and stick money in banks to earn big interest. Grabbing that cash with both hands and making a stash is a snap because you can clear tens of thousands of the in-game thaler currency in just a single trip as long as you find the right place to market your furs, velvet, and so on. Generally, though, you just need to buy in the south and sell in the north, so you can make a fortune without too much trial and error.

This greater concentration comes at the cost of some of the sandbox feel that is a hallmark of the franchise. Whereas before, you could take a break from the more story-oriented quests and go off to try to win a noble's daughter or get into a tournament either on foot or atop your horse, now, you're generally stuck working for the man. Just about all you can do here for recreation is hit up taverns for bare-knuckled brawls, John L. Sullivan-style. This extracurricular activity is fitting given how this grittier world has been stripped down to the basics of survival, although such one-note scrapping gets dull after a few bouts. Sure, life was pretty rough and hardscrabble in the 1600s. But it would have been nice to have that lesson taught in more involved ways than smashing some drunk's teeth in over and over again.

A big part of this grimmer atmosphere has to do with the presence of firearms. In addition to the standard swords, warhammers, and bows, you can now cut to the chase and whip out pistols, muskets, and even grenades. As expected, this changes combat. A lot. Before, you could mount a horse and make half-crazed charges into enemy mobs, slashing and sticking the bad guys at will. Now, you have to be more cautious before embarking on such assaults because most packs of foes tend to have a rifle-toting goon or three in the ranks who can turn out your lights with a single shot. This extra prudence can be something of a killjoy at times, especially for those who loved the freewheeling cavalry rushes you could launch into with little fear in Warband.

At the same time, this great danger adds more tension to battles, along with a tactical layer that makes you think before using those spurs. The period-specific smooth-bore weapons used here are quite inaccurate beyond a few paces, so it's not like you can sit back and play sniper. Stopping power isn't particularly strong, either. A good suit of armor worn by the standard cavalryman or a pikeman can absorb enough damage so that its wearer isn't even slowed down. Most of all, reloads take such a long time and require standing still during the process, which makes it very easy to readily take out a gunner with a pike or sword. All you have to do is survive long enough to close and skewer, which isn't really that much of a challenge given the inaccurate, wimpy guns. It's pretty easy to take out wannabe marksmen long before they can get through the priming and loading stage of getting off a fresh round.

Multiplayer features an unusual new mode called Captain, which is a team deathmatch game where human players control squads of bots. The setup is pretty simplistic in that you take to the dozen or so maps and simply try to slaughter the bad guys, but the gameplay is more than the sum of its parts. Adding firearms lends combat a whole new dimension. Instead of just running or galloping around hacking and slashing, you now have to either keep an eye out for enemy gunners or fire and reload carefully if you're wielding a musket. In some ways, though, dealing with the hazards presented by enemy shooters is better than playing the likes of a musketeer. Reloading is so onerous in pitched melee battles that it's just about impossible to survive for long. Unless you shoot and then retreat far back to cover to reload, you're inevitably bumped by a horse, an action that requires restarting the loading process, or run through by some tough guy with a very long pike.

Mount & Blade: With Fire and Sword is, like its predecessors, still a pretty rough-and-ready indie game. With that in mind, it is also one that comes with many flashes of brilliance, especially if you appreciate open worlds and intense, unique multiplayer. If you're OK with innovative gameplay taking a front seat to lower-end production values, this is one compelling sandbox-flavored sequel that comes with the extra spice of gunpowder. 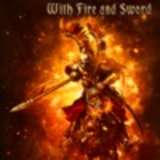