Motorstorm: Pacific Rift is a rush, which should come as no surprise to fans of its predecessor. It's rip-roaring fun to speed through fields of sugarcane and race dangerously close to a cliff's rocky edge in your buggy all while avoiding the deep treads of a monster truck ramming you from behind. This is the Motorstorm experience, first delivered in last year's fun--but stripped--off-road racer. Pacific Rift is more of the same from a gameplay perspective, but it throws in twice the number of tracks, a new vehicle type, and a more fully featured multiplayer experience. But it's not all about quantity: Some of the new courses are dazzling and, in many cases, far exceed the quality of the original's courses. A few nagging issues remain, but for the most part, you'll get your money's worth out of this great sequel.

As in the original Motorstorm, you begin each race by choosing a vehicle type and then dashing through an expansive off-road course against up to 11 other vehicles. Because each vehicle has its own strengths and weaknesses (motorbikes are quick to turn but vulnerable to crashes; big rigs are relatively slow but can plow their way through thick underbrush), courses feature a number of different routes to the finish line. It's up to you, through trial and error, to figure out which route best suits your chosen vehicle. You'll also use that knowledge to your advantage while avoiding the ferocity of your opponents--and exercising yours upon them.

Describing tracks as intricate actually sells many of them short. There are 16 of them in all, eight more than in the original's release, and some of them are mind-bogglingly clever. Perhaps the best of these is Sugar Rush, a high-speed romp through a sugar plantation that takes you through a cluttered factory and into its lush fields. The ramps are narrow while the turns are sharp, and the robust physics may cause a crate or random tire to get in your way where there hadn't been one before. It's also a tough course with multiple potential paths, and one in which a single mistake within the factory's claustrophobic spaces can cost you the race. On Beachcomber, a sprint across the white sands of a Pacific island getaway is complicated by marshes that get muddier as vehicles drive through them, soaring jumps, and thick vegetation. Even some of the less complex courses, such as Cascade Falls, are a joy to navigate thanks to the varied scenery, a great sense of speed, and significant differences between the branching paths. The high quality of these tracks makes other tracks look downright simple, such as the straightforward race through rocky gorges and mossy caves known as Razorback, or the minimalist watery environs of Colossus Canyon.

Some of the courses turn the spotlight on Pacific Rift's boost function. You can give yourself a kick of speed using nitro boost, but you can't use it too liberally, lest you overheat and explode. A few courses take you near burning pits of lava that further increase this risk but also scatter sprinkler showers about the track, letting you cool off your seared mudplugger. The Scorched track makes brilliant use of this mechanic, combining seemingly endless forks and burning straightaways into a fun ride. Of course, you'll not only struggle with the challenge of the courses themselves, but also with the aggressiveness of other drivers. Using a shoulder button, you can ram into other vehicles, which is a particular delight when behind the wheel of a big rig or monster truck. It's less exciting when you're driving a defenseless ATV and must cope with a crowd of vehicles at a course bottleneck--or dealing with an AI that ignores the best route for its vehicle in favor of forcing you over a cliff.

You will run into some other frustrations, though these aren't frequent and are a by-product of Pacific Rift's loose physics model, which usually makes for rough-and-tumble fun but can be a little too sensitive for its own good. You might crash for no apparent reason when hitting the bottom of a ramp or simply driving from one surface onto another, even when it looks like a clearly even transition and is one you've made a dozen times before without issues. Vehicle handling is also loose, which makes for impossibly high jumps, but also means that making contact with so much as a pebble could cause your buggy to launch into a series of somersaults. This is the case even with large vehicles, such as the new top-heavy monster truck, which feels less solid than you might imagine. These issues are generally avoidable if you have an error-free race, but it does bring a philosophical discrepancy to the forefront: Many of these design elements encourage crashing, but they also demand racing perfection if you want to finish in the top three--a dichotomy with which the game never quite comes to grips.

Fortunately, there are more ways to play than in the original Motorstorm. The Festival takes you through a series of races in which you earn points to advance ranks, and they become tougher as you push through them. Your vehicle selection is usually limited in these contests, which is a great way of introducing you to each vehicle and its preferred routes, though you may wish you had a wider selection if you prefer big rigs but are forced into a buggy. These aren't all simple races, either; In Eliminator races, the racer in last place will explode after a period of time until the field is narrowed to a single survivor, while another race variant may eliminate you if you crash a certain number of times. In Speed challenges, you need to race through a series of checkpoints, but they require a bit of trial and error because you only see one waypoint at a time, which may not give you enough time to make adjustments. Besides, at these times, you are a lone driver, and Pacific Rift is clearly at its best when you face a full pack of challengers.

The AI is a challenge, but it can't compare with the thrill of competing with like-minded racers online. Standard and Eliminator races are available, in ranked and unranked variants, and you can even invite friends to a party prior to racing. While the game's official site and other sources indicate support for 16 players, Pacific Rift actually supports 12 drivers. The whole thing is a riot, whether you're aggressively bumping into bikers with your big rig or jumping in a racing car and leaving everyone in your dust. If you'd rather hang out with buddies, you can also take advantage of Pacific Rift's split-screen mode, which supports up to four players. It's fun to race this way, and the frame rate keeps up rather well, even if the segmented screen makes it harder to enjoy the scenery.

And boy, that scenery is beautiful. The green cliffs of Raingod Spires are lush, and such details as a lingering mist set the humid mood. Riptide showcases gorgeous lighting effects and colorful seaside shacks, while the sight of distant waterfalls warms the background. Splatters of mud, splashes of puddles, and a subtle whooshing effect instill a great sense of speed on almost every track. It also performs better than the original Motorstorm: The loading times have been decreased, and moving through the vehicle selections in the menu is no longer agonizingly slow. The sound effects remain top-notch. Engines emit strident growls, and details from the audio cues when boosting to the thuds of your slow-motion crashes are dramatic, as well as just plain awesome. The soundtrack is a collection of boisterous licensed rock from Nirvana, Queens of the Stone Age, and a variety of other bands. You won't always be paying much attention to the music when rushing past your challengers, but like the game, most of it is loud and rowdy.

With such games as DiRT and Pure competing for your attention, Pacific Rift has much larger shoes to fill than before. It's good, then, that the core Motorstorm racing model is so much fun and there are more ways to experience it now. However, the track design is its greatest success; the intricacy and variety of the courses will keep you coming back to explore the possibilities and test your mettle. Aside from a few remaining quibbles, Motorstorm: Pacific Rift is a notable improvement over the original and a blast to play. 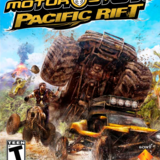