Destructive environments and excellent track design make MotorStorm: Apocalypse one of the most exciting racing experiences on the PlayStation 3.

The MotorStorm series has always eschewed simulation in favour of big thrills, chaotic racing, and exotic circuits. In MotorStorm: Apocalypse those elements have been refined to focus on what the series does best. The thrills are bigger, the racing is more intense, and the circuits are intricately designed and breathtakingly beautiful. They're also complete and utter anarchy. Earthquakes tear up roads, tornadoes hurl speeding trains at you, and helicopter gunners do everything they can to turn you into a fiery ball of twisted metal. By destroying the very ground you're racing on, Apocalypse throws up constant surprises that test the reflexes of even the most hardened racing fan, making each race an absolute delight from start to finish.

The premise behind the destruction is explained in Apocalypse's story-driven Festival mode, via a series of motion comics. They tell the story of three racers taking part in the MotorStorm festival: Mash, Tyler, and Big Dog. You first play as Mash, a rookie racer who's stowed away on the festival's ship, en route to an abandoned city. Warnings of a massive earthquake have caused the city to be evacuated, leaving only a few stubborn inhabitants. It's during the tremors of that earthquake that racing takes place, with the story focusing on each racer's progress. Though the motion comics that tell the tale are visually impressive, with a gritty and detailed look, the story itself is shallow. Why a security team known as Dusklite is hunting you is never fully explained, and the racers' motivations remain a mystery, so you never empathise with them. The story is at best a means to an end: a premise for the destruction and a way to get you from race to race.

There are also some restrictions imposed in Festival mode, which tie in with the story. You can't choose which vehicle to use for each race, so even if you're not a fan of superbikes, for example, you're stuck with them on certain circuits. However, this does mean you're given a great introduction to the various types of vehicles on offer, ranging from small dirt bikes and ATVs, through to gargantuan big rigs and monster trucks. New additions include superbikes, hot hatches, and supercars, all of which have their own strengths and weaknesses: bikes are nimble and can reach areas that larger vehicles can't, but they are easily wrecked, while supercars are fast, but their lightweight construction makes them an easy target for opponents to knock off course. The type of vehicle you're driving dictates the optimum path to take, and each circuit sports multiple routes to the finish line.

What makes Apocalypse even more exciting than most off-road games is that those paths may change during a race, with new ones created and old ones blocked off, making each track feel like a new experience every time you race it. There are nine different race environments, on which 33 tracks are based that take different routes or feature different disasters. All are beautifully designed and feature a number of disaster moments that give each race a thrilling adrenaline rush. The tall skyscrapers of The Mile High Club let you catch some serious air, but the real excitement kicks in when an earthquake hits, crumbling the road beneath you and toppling buildings to the ground just as you scrape past underneath. On Coach Party, a falling plane demolishes a high-speed straight as it screeches overhead and crashes right in front of you just as you cross the finish line. There's more than city driving on offer too. Buena Vista takes place on a beach overrun by tanks and helicopters that are shelling the mainland. A beautiful-looking mountain backdrop plays host to a barrage of planes that destroy an overhead bridge, catapulting oil tankers to the road below in a cacophony of fire and explosions.

The amount of detail that has gone into each track means there's always something going on, whether it's a building collapsing, a helicopter crashing to the ground, or a few disgruntled locals throwing Molotov cocktails at you. These events make the tracks more varied than those in previous MotorStorm games. Knowing when a runaway train blocks off a path or when the jump you're about to hit is going to crumble beneath you is key to completing a race. This is aided by the improved handling of vehicles, which is noticeably tighter than before, affording you the opportunity to make split-second decisions on the track. Using your boost wisely plays a part too, and not just in straight sections. Pulling a sharp hand-brake turn before an obstacle and then slamming on the boost is a great way to get out of tricky situations, as well as being immensely satisfying. As in previous games, you can't just hammer your boost all the way around a track; use it for too long, and your vehicle overheats and explodes. You can, however, take advantage of tracks that feature areas covered in water, as they cool your boost, allowing you to use it for longer periods of time.

Boost can also be used to ram opponents off the road, though this is the most disappointing aspect to racing, particularly when compared to the takedown system of Burnout Paradise . There are also recurring issues with the physics system, which sometimes decides that a twig or a small bump is cause enough to flip your entire car, sending it spiraling out of control into a brick wall. These moments are few and far between, though, and on the whole, racing is fantastic fun, combining a great sense of speed with clever AI opponents who use shortcuts, boosts, and nudges to hold you off first place. Racing as rookie Mash, opponents are relatively gentle, but as you progress to pro with Tyler, and to veteran with Big Dog, they become more aggressive, making it much more challenging to land first place.

Fortunately, you don't have to place first to complete Festival mode. In rookie racing you only have to place fifth or above to unlock the next race, while pro and veteran require you to place third or above. If you do manage to place first, you unlock the Hardcore Festival in Wreakreation mode, which lets you replay the race against super-aggressive opponents. Should that be too much for you, there's also an easier Time Attack mode, with results from both appearing on global leaderboards, allowing you to compete for the best time with others online. Wreakreation also houses the standard Quick Race mode, letting you race a circuit with the vehicle of your choice. You can also select from three different racing types: standard races; eliminators, a particularly manic race where the last position is periodically removed; and chase, where you must maintain a certain distance between yourself and the race leader. Further options include AI difficulty, number of laps, and whether disaster incidents take place.

Quick races can also be played locally with up to three other players via split-screen. Being able to exchange jibes with your friends before sending them hurtling off a cliff with a well-placed boost is lots of fun, even if the frame rate and visual detail do take a bit of a hit. That fun also extends to the online multiplayer, where you can take your two-player split match online to compete in races--an absolute riot when you've got a full 16 players. The same three race modes are available, though they are augmented with a perks system that lets you choose from a selection of three power-ups to use in a race. These include Swift Return, which halves the time it takes to reset to the track after a crash; Critical, which lets you hold your boost for longer; and Cheap Shot, which lets you ram people using less of your boost. Each race awards you with chips, a form of experience points, which increase your driver level, unlocking new perks. You can also unlock new player icons, driver avatars, and parts for cars, which you can use to customise your favourite ride for online races. Customisations are purely visual, though, so no matter what you add, your car performs the same.

If you're the gambling type, you can also use some of your chips to bet on the winner of a race, which can potentially double the winnings that you receive. This makes the already thrilling multiplayer that little bit more exciting, with racers strategically ramming opponents who get in the way of their bet. If you'd rather not take your racing online, there's still plenty to do in the single-player modes. Each track has a number of cards to collect that detail the history of MotorStorm. They're tucked away in some extremely difficult-to-reach areas, requiring some nifty jumping and boost skills to hunt them all down. That does give you time to admire the visuals, though, which are incredibly beautiful, especially with all the destruction going on. The Boardwalk tracks' storm-filled skies showcase a gorgeous lighting system as lightning strikes over the rough waves of the ocean, while a tornado sends shards of the pier flying across the screen. Even more breathtaking are the skyscraper-filled backdrops of the Skyline tracks, which disintegrate into piles of rubble as an earthquake shakes the ground.

If you're fancy enough to own a 3D television, then you're in for even more of a treat. Though the resolution is noticeably decreased when the game is running in 3D, this lower fidelity is more than made up for by the thrill that the 3D creates. The aforementioned shards of pier now lunge straight at you, and mud flies past your face, while the crashing bridge of Buena Vista appears to fall around you, creating a real sense of danger as you attempt to drive past unscathed. This is one of the rare instances when 3D really enhances the experience, making each race even more of rush than it already is--a real showcase for the technology. Hooking up to a good 7.1 audio system makes the experience even better, as the low growls from the engines and huge bass-filled explosions make you feel like you're right there in the middle of the action.

Regardless of whether you experience the game in 3D or not, MotorStorm: Apocalypse is a fantastic-looking game that's tonnes of fun to play. But it's the jaw-dropping track design that will keep you coming back for more, creating some of the most sensational racing you can experience on the PlayStation 3. Its few failings do little to detract from this, and with its expanded content and great multiplayer options, there's a lot more to love this time around. Apocalypse is the MotorStorm concept taken to its ultimate conclusion: complete and utter destruction. And it's a blast. 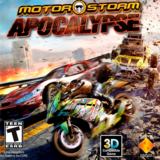