The graphics are some of the best for a racing game on the Game Boy Advance, and the different modes should keep you busy on long trips.

MotoGP is the first motorcycle racing game for the Game Boy Advance, and it also happens to be one those games that makes you truly wonder how much untapped potential Nintendo's handheld really possesses. The development team at Visual Impact has managed to create a game that pushes the technical limits of the Game Boy Advance in both the audio and visual departments, and in the process, it has created a fun motorcycle racing game that has very few drawbacks. However, like GT Advance Championship Racing, MotoGP commits the ultimate portable game sin by using a password system as opposed to a battery save option, which somewhat defeats the purpose of playing through some of the longer modes when you're on the go.

MotoGP has the standard assortment of racing modes, including quick race, time attack, tournament, and grand prix. In the quick race mode, you select from any one of the three drivers available (others can be unlocked later by meeting certain requirements), select a track, and then begin a single three-lap race. The time attack mode gives you an opportunity to set the record time for any one of the 16 tracks, though you'll only have access to one track until you lock additional ones in the tournament mode. The tournament mode is made up of four different leagues, and you'll be required to perform at a certain level in each league in order to progress. For example, in the first league, you simply have to place fourth or better in order to move on to the next league. Lastly, the grand prix is set up like a championship mode. You'll have to go through a series of races and earn points based on your finishing position. At the end of the grand prix, the champion will be determined based on how many points each participant has earned. With the exception of the quick race mode--which seems almost pointless considering that you can jump into any other race just as quickly--each mode in the game offers its own challenge and reward, which provides a little extra incentive to actually play through all the modes. MotoGP also offers a four-player multiplayer mode, but unfortunately, each person needs to have a copy of the game.

While it has much in common with the gameplay of older 2D motorcycle racing games, the gameplay in MotoGP has a few flashes of realism thrown in here and there. At the starting line, if you keep your finger on the accelerator, then your bike will spin its tires and not go anywhere. Likewise, going full speed into a hairpin or even just a moderate turn will cause you to slowly lose control of the bike until you completely spin out and go flying through the air. Of course, there's also the added danger of crashing into barriers located on the sides of the track, so you can't just hold down the accelerator throughout the entire game.

That's not to say that MotoGP doesn't have a few unrealistic elements. The game includes a turbo boost option that you can use whenever the meter in the bottom left portion of the screen is full. To use the turbo, all you have to do is perform a wheelie by pressing down on the D pad and holding the accelerator at the same time. However, if you stop the wheelie before the meter is completely drained, you have to wait until it's completely recharged again before you can execute another. It's a minor annoyance in the larger scheme of things, but it doesn't make much sense.

While the gameplay is fun and easy to get into, the graphics in the game almost completely overshadow it. MotoGP appears to be running on a slightly enhanced version of the engine that powered GT Advance Championship, so the Mode 7-like scrolling of the track and surrounding objects is very smooth. There's a distinct lack of variation in trackside detail, but most of the time you're going so fast through the track that you probably won't notice. More importantly, each of the 16 tracks in the game is a faithful reproduction of its real-life counterpart. Those who know the Suzuka, Motegi, or Mugello tracks will immediately recognize them. However, when you first play the game, you may be a little thrown off by the relative short draw distance of the track, as turns seem to appear rather abruptly, but as you spend more time with the game, you'll eventually get used to it. The sprites for the motorcycles and their riders are large and fairly detailed. The animations for crashes and turns are also nicely done.

The soundtrack in the game is largely made up off guitar riffs and generally fast-paced music, which fits the game well, but like in previous Game Boy Advance games, the quality can be a little low at times, producing a muffled effect. There isn't anything particularly noteworthy about the sound of the game, as you'll find the typical buzzes that have been found in older motorcycle racing games.

Overall, MotoGP is a very good game. The graphics are some of the best for a racing game on the Game Boy Advance, and the different modes should keep you busy on long trips, but as previously mentioned, the game uses a password feature. Whenever you complete a certain number of challenges, the game will give you a password that you have to write down and enter when you play the game again. This makes little sense for a portable game, and the fact that you can't grab a password at any time makes it even worse. Still, if you're looking for a fun racing game, you'll want to give MotoGP a try. 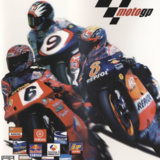 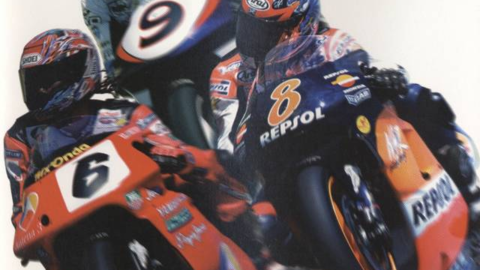 While it doesn't have as many tracks or as much replay value as we'd like, MotoGP definitely deserves a spot on your shelf.