There's no shortage of World War II strategy games on the market, and Moscow to Berlin does nothing good to stand out from the pack.

Moscow to Berlin is the latest World War II game from developer Digital Reality, responsible for both D-Day and Desert Rats vs. Afrika Korps. This chapter in the series covers the eastern front of World War II, a titanic clash of German and Soviet armies that resulted in the Germans almost taking Moscow and the Soviets eventually smashing Berlin. In fact, the game's three campaigns cover the major phases of the conflict, from the Germans invading the Soviet Union, the middle phase that included Stalingrad, and finally the Red Army march on Berlin. The missions in each campaign alternate sides, though, so you don't really get a sense of personality or distinct characters throughout the game. In one battle, you'll lead a German tank attack on Soviet positions, while in the next you may lead Soviet forces into battle against the Germans.

It all sounds quite epic, but it's not. Instead of commanding armies, you'll command a handful of tanks and other vehicles, as well as squads of infantry in battle. This is a tactical-style real-time strategy game, so there's no resource gathering or base building. Rather, you're given a set number of units at the beginning of the mission, and you must accomplish your objectives using them and whatever reinforcements that are programmed to arrive. The artificial intelligence isn't really smart, and its job is mainly to sit there and wait for you to attack, save for those moments when it's scripted to attack. The pathfinding is also dubious, and your forces will often jam together, which can get you in trouble if your advance forces encounter the enemy while the bulk of your troops are still trying to untangle themselves.

Moscow to Berlin also shares some of the micromanagement issues of D-Day. Basically, you're given a lot of control over individual units, but most of that is worthless in the heat of battle. When tanks can explode with just one or two hits, you don't have time to fiddle with each unit onscreen. And this means that infantrymen are rather useless in the game, since they aren't grouped by squads but rather by individual. So doing basic things such as loading up a troop transport requires you to click on each grunt and give him an order to board the vehicle in question. It's easier to forget the infantrymen anyway and just forge ahead with tanks, which have an unlimited amount of ammo and blast everything in their way. They'll even use their main cannons to shoot at infantry, who oblige the tanks by standing in the open.

On the easier difficulty setting, you don't have to worry so much about micromanaging everything, since your forces are tough enough to weather most battles. However, the tactical skill in the game is reduced to being able to drag-select a bunch of units, send them at the enemy, wait around while the repair truck heals everyone, then repeat the process again. Finally, the multiplayer in Moscow to Berlin is frankly weird, since the game's online matchmaking lobby is also shared with the D-Day crowd. In fact, of the players that you'll find online, most only play D-Day, so finding someone to play Moscow to Berlin with can be difficult.

The graphics engine was already old in 2004 when it was used for D-Day, and two years later it's really behind the times. It does have some nice features, such as the destructibility of the environments and the way tanks explode in glorious fireballs, but the rest of the game suffers from dated and grainy graphics. The sound has the obligatory voice acting with thick German and Russian accents, and the music won't really inspire you or catch your ear. There's just not a lot to recommend in Moscow to Berlin, not with so many better World War II real-time strategy games on the market. So it's probably a bit fitting that this chapter of the series covers the end of World War II, because it's run out of gas at this point. 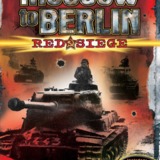