Moon is a well-crafted shooter that blasts off but fails to reach orbit.

As extraterrestrial shooters go, Moon is more like an actual lunar landing than a science-fiction adventure; it's technically impressive, but a bit dull. The gameplay is brisk and satisfying because the game runs smoothly, controls sharply, and features a solid array of weaponry. However, Moon doesn't capitalize on this foundation: The levels and enemies are repetitive and there isn't much of a story, so for all its technical vigor, it feels a bit lifeless. Still, Moon provides enough solid, fast-paced action to make it worth the trip for those craving some handheld action.

The story begins with the discovery of a strange hatch on the lunar surface. Playing as Major Kane, you are called in to investigate the interior of the hatch. You go in alone, but you'll have radio contact with a few other people throughout your adventure. Between your radio exchanges and the informational terminals that you find throughout the alien structure, a dark story unfolds that is occasionally interesting but ultimately forgettable. Though the information you glean from terminals as you progress is a nice incentive, the story serves as little more than a backdrop for the run-and-gun action.

Like successful Nintendo DS first-person shooters before it, Moon employs the stylus for aiming, the D pad for moving, and the L button for shooting (with a flipped control scheme for lefties). Switching weapons is as simple as touching a large button at the bottom of the touch screen to pause the action and bring up a large icon menu of your arsenal. You can interact with the environment with a context-sensitive touch-screen button, but that's the extent of the controls. It's a simple, elegant scheme that works intuitively and makes playing Moon a pleasure.

The enemies that you'll encounter will put your reflexes to the test, and you'll have to be nimble to survive. The controls make dodging and shooting fun and easy, but even skilled players will succumb to hails of laser fire. Fortunately, death only sends you back to the last save point, which generally isn't too far away. You'll blast and be blasted by floating drones, spidery robots, hulking automatons--enemies that are more mechanical than alien. Later levels merely increase the quantity and toughness of these enemies rather than the variety, so there aren't very many different types to encounter. Even the many bosses begin to feel familiar, given that each demands that you follow roughly the same pattern to defeat it. The limited robotic legions that you'll face feel pretty flat as enemies go, but it's still fun to blast them to kingdom come.

As you descend into the hatch, you'll encounter initially impressive alien architecture. The walls and floors sport strange geometric designs, and pulsing neon light highlights corridors and pillars. Rooms occasionally feature odd machines, and different levels have different wall patterns and color schemes. Every detail scrolls by smoothly as you progress, but the further you go, the more familiar everything starts to feel. Despite the changing color schemes, each level is a lot like the one before it. There are a few brief outdoor vehicle sequences to mix it up, as well as a remote-controlled droid that you can use to zip through small tunnels, trigger switches, and collect bonuses. The various bonuses (weapon upgrades, health boosts, alien artifacts) make you more powerful and unlock extra training missions, but they aren't exactly hidden. So though it can be rewarding to seek them all out, it's just a simple matter of referring to your map, going into every room, and sending your droid into every small tunnel.

The music of Moon is quite good and sets a great tone for your descent into the alien installation. Atmospheric tones are punctuated by the low thrum of machinery and intermittent bass beats. The sound effects are rich as well, offering a helpful aid for locating and identifying foes. There are a few miscues, though, notably the clunking moon-boot noise that accompanies your every step and the Zelda-esque beeping that sounds incessantly when you have low health. Fortunately, these aren't enough to ruin the generally high-quality sound design.

Moon is a technically proficient game that affirms what we already know: It is possible to make a quality first-person shooter on the DS. Without any multiplayer modes, the adventure will last you a solid 5-6 hours. Unfortunately, though Moon builds a solid launchpad, it fails to reach orbit. Repetitious enemies, a ho-hum story, and uninspired level design hinder the stellar potential of the sharp control scheme and speedy action. Though you might dream of what Moon could have been, you can still have plenty of fun blasting your way through this lunar adventure. 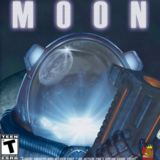 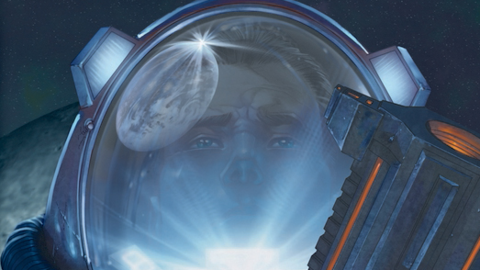 A sci-fi adventure game set in the year 2058 in which researchers uncover a sealed alien hatch on the moon, and head inside to uncover its secrets.