Monster Tale is a whimsical, colorful 2D adventure that's sure to please with its engaging combination of exploration, pet raising, and action.

It's a difficult market out there for original game intellectual properties, especially those by smaller developers and publishers that don't get a big advertising push. So it's something of a small miracle that a game like Monster Tale even came to market--it's a 2D side-scrolling DS game from a startup developer, released around the same time as the 3DS launch, featuring an unfamiliar cast of characters and a cutesy visual style. But it's a miracle you should be thankful for, because Monster Tale is a delightful action adventure game that's bursting at the seams with charm.

Monster Tale puts you in the role of Ellie, a young girl who finds a strange bracelet and is transported to a new world filled with monsters. She also finds a mysterious egg from which a hungry little beast emerges, which she names Chomp. Ellie soon learns that she's not the only child to stumble into this world, but the other children have selfishly abused their power and status in the monster world to subjugate its citizens. As it turns out, it was prophesied that the wearer of Ellie's bracelet and the "legendary monster" at her side would save the world, and it's up to you to guide Ellie and Chomp to cut the other kids down to size.

Monster Tale's progression resembles that of Metroid and many of the modern Castlevania games. You guide Ellie through a contiguous world. As she acquires new abilities and key items, she can return to various places to reach previously inaccessible areas or destroy once-impenetrable obstacles. Exploring and gradually unlocking and discovering new locales is a lot of fun, and each new region of Monster Tale's world brings with it new visuals, enemies, and gimmicks. The environments have a bright, cartoonlike charm to them that makes every new area you venture into interesting and distinct. Still, Monster Tale's exploration feels simplified, since there aren't as many secret areas and hidden goodies to sniff out and discover as you might expect.

But the mildly disappointing exploration aspect of Monster Tale is heavily overshadowed by the game's great monster-raising mechanics. Chomp can be shifted between the top and bottom screens of the DS. When he's on the top screen, he helps Ellie attack out-of-reach foes, clear away obstacles, and perform special attack and assistance skills as commanded. However, his health drains gradually, and he eventually needs to rest. When you send Chomp to the bottom screen, he is in his "monster sanctuary," recovering health and enjoying any monster toys and tasty snacks you may have collected. Chomp can't attack directly from the monster sanctuary unless an enemy infiltrates it, but some of the toys he plays with have effects on the action happening in the top screen. Finding and giving Chomp fun stuff raises his experience by various amounts, and as he gains levels, he eventually begins to morph into several different forms with differing traits. There are numerous "evolutionary trees" to explore, and each form is worth investing time in because special attacks and abilities learned in one form can be carried over to other forms, making Chomp an especially interesting and versatile companion.

Much of the fun comes from acquiring and fighting with new abilities you gradually learn, and as Monster Tale progresses, Ellie becomes one heck of a combat machine. She can eventually whack and juggle enemies in multi-hit combos, blast a rapid-fire series of painful power waves, and chain strikes and shots into varied attack patterns, among a myriad of other skills. It's enjoyable to find new and interesting ways to use both Ellie's and Chomp's attacks. They need all of these skills too, because there are lots of cute but deadly foes roaming the monster world, and some of them require specific methods to be defeated. The beasties aren't too tough to start with, but the going becomes considerably more difficult about two-thirds of the way through the game. The boss battles are especially fun and memorable, because you take on the other kids with their own oversized pet monsters and special attacks. These fights challenge you to use your learned skills and Chomp's assistance for both offense and defense, and they showcase just how well Monster Tale's mechanics come together. While experienced action fans shouldn't have too many problems adjusting to the fluctuating difficulty, the younger audience Monster Tale seems to be targeting might find it a bit frustrating.

Monster Tale isn't without a few flaws, though, and the biggest issue is the amount of time that you have to spend running to and fro across the map. There are no warp points in Monster Tale that aren't tied to a puzzle. If you have to get to a faraway area to pick up the next skill or fight the next boss, you have to travel on foot to get there every single time. As a result, you cover a lot of the same ground as you run from place to place, which gets a bit grating after a while. There are also some odd points where it's easy to get stuck. For example, in one area, there's a blockade that you can't remove with any of your skills. As it turns out, you need to grind for a bit of money and pay a nearby shopkeeper to help remove it, but the game never gives a strong hint that this is the solution to the puzzle. And, although it's a minor quibble, the way the game freezes the action to play a fanfare whenever Chomp gains a level can be annoying in a heated situation.

Despite its flaws, Monster Tale is a great little adventure. While it may seem like a disposable kiddie game at a quick cover glance, players who go beneath the surface will discover a fun, engaging action game with an endearing aesthetic and some interesting new additions to a classic formula. 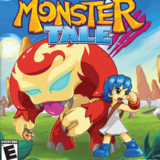