Monster Jam: Maximum Destruction can best be described as a poor version of Twisted Metal: Black.

Monster Jam: Maximum Destruction can best be described as a poor version of Twisted Metal: Black. Similar in premise to Incog's excellent car combat game, Monster Jam lets you get behind the wheel of one of 26 licensed monster trucks in an attempt to destroy and outlast three other opponents across eight different arena-type levels. While this might sound like a good idea on paper, in practice, the game suffers from a variety of problems that range from poor sound to bad level design, and in the end, they keep Monster Jam from being the least bit enjoyable.

Perhaps the biggest handicap that faces Monster Jam is its lack of variety and its overly simple gameplay mechanics. While there are 26 different trucks to choose from--much more than the number of vehicles you'll find in Twisted Metal: Black--the differences between them are totally negligible. Supposedly, each of these trucks has unique power, handling, acceleration, and cornering characteristics, but you'll be hard pressed to find any real difference between their controls once you actually start the game. So the control difference between, say, Grave Digger and El Toro Loco is nowhere near as pronounced as the difference between Twisted Metal's Mr. Grimm and Junkyard Dog, for example. As you progress from one level to the next, you are awarded a certain amount of money that you can use to buy upgrades like tires, shocks, and engines for your truck, but again, these don't seem to have a noticeable impact on the way your truck performs or looks.

Additionally, these trucks lack any kind of unique special weapons or similar notable distinctions. That's because the majority of the combat that you'll engage in with others involves nothing more than ramming your opponents at full speed. The entire game basically consists of chasing down other trucks until their poor AI traps them up against a wall or other solid object, then bashing into them repeatedly until their life bar disappears, and then repeating this process all over again throughout all eight arenas. As long as you hit an opponent with the front of your truck, you won't sustain any damage. It's interesting to note then, that in head-on collisions with other trucks, your opponent always takes more damage than you, no matter which monster truck you choose to play as. You can employ this effective yet basic means of combat in every level in Monster Jam, since even though the different environments might look unique, their differences are purely skin deep. There are a few weapons, like a machine gun and a rocket launcher, that you can pick up in each level, but since simply ramming other trucks works just fine, there's never a frantic rush to reach these power-ups.

The game's levels, which include the Vegas strip, a military base, the Roman Colosseum, and an ice rink, all consist of three or four wide-open rooms that are interconnected by a series of simple corridors. Once you've smashed the few cars, hotdog stands, and other meaningless inanimate objects strewn about each level, there is absolutely no way of interacting with the environment. And Monster Jam makes no attempt at hiding the bad level design in the game, either. One of the "rooms" in the Vegas level, for example, is modeled after the famous Vegas strip. Here, you'll actually get to drive on the strip itself and do combat in between a handful of neon-adorned hotels. But the strip comes to an abrupt stop at either end of the room, and in its place is an ugly, fuzzy texture halfheartedly painted on the wall, which is supposed to depict the rest of the famous avenue. You'll almost think this to be a funny homage to the Road Runner's deceptive antics, until you realize that it's no joke. The rest of Monster Jam's eight levels are represented just as poorly.

On the other hand, the actual monster trucks themselves look quite good. Each truck has a subtle reflective sheen on its paint job, and small details like functioning shocks and flaming exhausts are quite noticeable. And as the trucks take damage, they'll lose body panels, and their engines will start to smoke. It seems strange for there to be such a sharp visual contrast between these impressive vehicles and the bland levels. There are no such contrasts when it comes to the game's sound, however. The game's music is made up of passable guitar rifts, the commentator's lines quickly become repetitive, and there's often a lengthy delay between when collisions occur and when you hear the sound.

Monster Jam has little in the way of replay value, either. The game's career mode takes you through the eight different levels three times, with no discernable difference in opponent difficulty, money earned at the end of each level, or anything of the like with the completion of each "season." Depending on which truck you've chosen, you can unlock up to two other officially licensed monster trucks after you finish the career mode. In all, you can unlock 36 additional trucks, but again, the differences between them are mostly cosmetic. As you'd expect, Monster Jam has a quick-play mode, and it also has eight minigames that mostly involve racing, something that monster trucks clearly weren't meant to do. Nonetheless, you'll finish these minigames in about 15 minutes, and you won't be rewarded for that accomplishment.

It's easy to see the appeal of monster trucks--there's nothing more visceral than crushing cars and bending metal. Unfortunately, games like Microsoft's Monster Truck Madness series for the PC have done a much better job of representing that raw power than Monster Jam. And with Twisted Metal: Black still widely available in stores, there's little reason to recommend this game to any but those who simply cannot live without collecting everything monster truck. 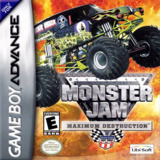