Even with tens of hours of new content and welcome improvements over its predecessor, Monster Hunter Freedom Unite has yet to hunt down a few critical annoyances.

When looking at a checklist of features, it's easy to see why the Monster Hunter series has garnered such a cult following. With scores of monster species to hunt, classes of weapons to learn, and special items to craft, any Monster Hunter game is almost guaranteed to provide dozens of hours of gameplay even in a loose play-through. Monster Hunter Freedom Unite for the PSP, an enhanced version of 2007's Monster Hunter Freedom 2, is most certainly the epitome of the series thus far with its scads of additional content and advancements to its predecessor's core. Even so, there are some things that have not changed with this "upgrade," which leaves Unite with the same frustrations that series veterans have been putting up with for five years.

From the introductory cinematic that shows you getting knocked into the snow by a gigantic monster to the town in which you wake up and the people with whom you interact, Unite seems like an exact replica of Monster Hunter Freedom 2. The structure of the game is very simple: You reside in a single town that acts as a hub for many activities, the most significant of which are quests that send you out into the field. Among these quests are hunting expeditions, where you must take down a large beast; slaying quests, where you must take down multiple monsters of a certain species; and gathering adventures where you're asked to bring someone herbs, mushrooms, or monster parts. There's no shortage of variety to your encounters because the monster roster is a healthy mishmash of dinosaurs, swine, sea creatures, gorillas, and more.

Monster Hunter Freedom Unite looks and sounds fantastic. All of the musical compositions are complete with fully orchestrated instrumentation, matching the vistas you'll encounter on your journeys. The very first location you'll venture toward, the Snow Mountains, boasts a beautiful lake in which you can see a crystal clear reflection of the rocky ranges on the horizon. The hot sun shines brightly over the desert area, which comes with all the detail of small, impromptu sandstorms. All of this runs at a consistent, playable frame rate.

Though Unite is an expanded edition of its predecessor, its additions and enhancements are substantial. They come in many different flavors, with the most obvious ones being the addition of several monster species and well over 50 new quests. In case you're keeping score, that potentially amounts to more than 25 five hours of additional content over the previous game, depending on your play style. For those who were already sucked in by the Monster Hunter aura--and desperately want more--you can import your Freedom 2 character, which makes this seem like a no-brainer purchase.

"Bigger" might be enough for those fans, but "better" is, well, even better. Unite fixes a few more significant problems, fixes that will be welcomed by both fans pleading for improvements and newcomers who might otherwise be intimidated. First, the excessive loading times can be dramatically cut down by utilizing the data installation option. This will reduce many of the load times by two-thirds, and in some cases, even more. Second, the race of Felyne helpers--those anthropomorphic cats that helped tend to your farm and cooked delicious meats for you in the previous game--can now come to your aid in battle. Monster Hunter games have been notorious for their awkward and difficult combat, and having a companion to help wail on your assailants or pick away at them from afar makes the game a little more accessible for single-player adventurers.

Though Capcom succeeded in improving load times and throwing you a companion with whom to fight monsters, it did not adequately address other frustrations. The most egregious miss was with the game's camera system because it still gives you a very poor vantage point for dealing with the speedy, agile, and powerful monsters that will either surround you in groups or dash to your immediate vicinity in the blink of an eye. Unite's camera is third person and primarily behind the back, but it can be rotated left or right with the D pad and reset with the L button. Pressing up or down allows you to change its height, but this is handled so oafishly that you'll never quite get the height you need to see the battlefield most effectively. Though you can contort your hands in such a way to move with the analog nub, pan the camera, and access the reset button simultaneously, the bottom line is that players should not have to employ such an awkward workaround to compensate for poor usability.

Lock-on control could have been used to alleviate at least some of the camera's problems, but yet again, it's nowhere to be found. Because you're supposed to attack different parts of a monster's body to achieve different results it's true that lock-on control might remove the challenge of and pinpoint control needed to, say, aim for the head versus the front leg. There have been variants of lock-on control employed in other games that still allow for body part targeting though. Further, the "challenge" here is turned into frustration thanks to the initial problem of a poor camera system. That this--the third installment of the series for PSP--still hasn't addressed some of Monster Hunter's most fundamental flaws is disappointing.

The silver lining is that, as with its predecessor, Unite allows you to tackle multiplayer adventures via ad-hoc play. With up to three friends watching your back and teaming up to take down the most ominous of wyverns, this has always been the way to fly, especially given the issues with the series. Multiplayer can lead to some great moments of camaraderie and elicit fond memories of games such as Phantasy Star Online. If you can manage to get accustomed to the awkward camera and controls, as well as remain a diligent player, you'll be able to scratch your loot-scrounging itch with some truly spectacular, rare gear.

That's a very big if, and while it's one that many longtime Monster Hunter fans are sure to satisfy, others might not be so patient. Yes, the improvements made here are much appreciated, as well as a decent start to enhancing Monster Hunter's playability (which is an important distinction from simply making it "easier"). But the series still has a few hurdles to clear before everyone who's interested can enjoy all the content it has to offer, and Monster Hunter Freedom Unite simply hasn't made those jumps yet. 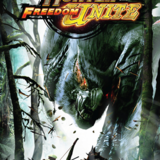