By neglecting to address the fundamental problems of the original and slicing out the online play, Monster Hunter Freedom negates the few improvements it makes to its PlayStation 2 predecessor.

Monster Hunter Freedom for the PlayStation Portable is virtually a straight port of Monster Hunter G, which itself was a slightly beefed up, Japan-only version of Capcom's original Land of the Lost-meets-anime dungeon crawler for the PlayStation 2. In its translation onto the PSP, Freedom has been stripped of Internet play, which was deeply flawed in the original Monster Hunter but still a rather critical component of the experience. The series' passionate following should be thrilled that some form of Monster Hunter G is getting a proper US release, but by gutting the online component and failing to address the original Monster Hunter's problematic camera and clumsy combat, Capcom has released a game that is both promising and simultaneously difficult to recommend.

Monster Hunter Freedom takes place in a pseudo-prehistoric time and place--our best guess is somewhere around 20XX BC--in which small tribes of humans with a fair amount of technological savvy live mostly in peace. Except, of course, for all the monsters. Though many of the monstrosities you'll encounter are pretty much just dinosaurs, you'll also encounter massive fire-breathing wyverns, oversized flying insects, bands of thieving cat people, and other strange enemies. The game expends zero energy on developing backstory, but the setting is well-defined enough, and your basic desire to hunt monsters serves as solid motivation.

Before you enter this wonderful world of hunting monsters, though, you'll need to create a character using the game's fairly boilerplate creation system. You choose your character's gender, each of which has its own set of prefab faces and hairstyles to select from. You also get to choose from a selection of different "hip!" and "huah!" sounds for your character to shout in the heat of battle. The number of variables you can tweak are few, but the number of options you're given within each variable helps make up for a lot. Either way, your character will soon be buried under layers of armor and loaded with massive weapons.

With your sweet new hairstyle and skimpy caveman duds, the game throws you into a small village, which effectively serves as the hub for all your non-monster-hunting-related activities. It's here that you get all your quest assignments; buy and sell goods, weapons, and armor; and rest up. Also, you can take materials you've collected out in the field to a shop in the village and use them to upgrade weapons or create weapons and armor from scratch. The game encourages you to use the crafting system, rather than just buying all your gear, by making it cheaper to craft than to buy. Once you talk to the chief in the village, who will present you with a list of quests that you can undertake, you'll head out into the wilds.

There are two main types of quests you can take on in Monster Hunter Freedom: hunting quests and gathering quests. The primary, and arguably most fun, quests are the hunting quests, which charge you with scouring forests, swamps, jungles, and desert environments for specific monsters to slay. Sometimes just taking down your target is enough, though you'll regularly have to break out the skinning knife to bring back trophies of your kill. You start off the game with a single blade weapon, though you can also switch over to the slow-moving but extremely powerful great swords, hammers, and lances; the faster-moving dual swords; or the ranged bowgun. There's definitely a distinct feel to each of the weapon types, but none of them ever feel responsive enough, and the sensation that you're fighting against the controls is a fairly constant one. What's more, there's no real-time weapon switching, so if the weapon you equipped your character with isn't dealing the massive damage that you'd like, you'll have to travel all the way back to your house to change your gear.

You'll move your character around with the analog stick and tap on the triangle and square buttons to dish out attacks. A few consecutive button taps can trigger a multihit combo, but once you start in on a combo, it takes a while to make it stop. This is problematic because the game has no lock-on system, and if the monster you're trying to slay moves after you start your attack--something you can pretty much guarantee--you'll find yourself combo-attacking thin air. The movement in general feels pretty clunky, too, as you need to come to a complete stop and then sheath your weapon to use a stat-replenishing item, and your character does a weird little half step every time you stop, which creates unnecessary pauses whenever you want to change direction.

The other main quest type--the gathering quests--requires you to scour the environments for stuff like herbs, mushrooms, or more-dangerous bounty, such as monster eggs. However, by making you wander around the different zones, looking for patches of mushrooms or the bright colorations of the herb plants, these quests prove to be even less fun than the hunting. The game really piles on the gathering quests early on, though the ratio does eventually even out a bit. It's not all quests, though, and there's plenty of ancillary activities for you to engage in. There's a farm just outside of the village where you can mine for valuable ore, as well as fish and maintain a garden, all with the help of the Felyne race of cat people. Those same creatures can also be paid to cook you up delicious, stat-enhancing dishes. These other activities can be pretty fun; it's just too bad that the core action is so fundamentally flawed.

What really makes the whole questing experience in Monster Hunter Freedom frustrating is the game's antiquated third-person camera, which requires you to constantly tap on the L trigger to center the camera behind your character. You can use the D pad to manually rotate the camera and cycle through a few mildly different camera angles, but when you're in the heat of combat, it's still needlessly difficult to keep a bead on your current enemy. It's really a shame, because Monster Hunter Freedom is a pretty sharp-looking PSP game. The different zones are pretty small, and the load times as you travel from one zone to another disrupt the pacing of the game, but there's lots of atmosphere to the background environments, and it's hard not to admire your character once you've equipped it with some of the more epic-looking gear.

Monster Hunter for the PlayStation 2 was bolstered by the inclusion of online play, something that Monster Hunter Freedom does without, though you can still play locally with other monster hunters by choosing to go into the "online" version of the hunter's guild. Along with being able to take on all the usual quests with up to three other players, Freedom introduces new treasure-hunting quests, which are faster paced than the usual quests and simply require you to deliver a bunch of items you recover off monsters, or find in the field, back to the base camp. The multiplayer in Freedom can be fun, assuming you have nearby friends who share your enthusiasm for killing prehistoric monsters, but it's still no substitute for a proper online mode.

Like the PlayStation 2 game it's based on, Monster Hunter Freedom has a lot of pretty cool content that is roadblocked by a camera that requires near-constant babysitting and a slow-pouring combat system that doesn't feel fully realized. The fact that there isn't exactly a boon of games like Monster Hunter for the PSP makes it slightly more appealing than its predecessor ever was, but even then the various flaws are all but too much to bear. Even if you've already come to terms with these problems in the original Monster Hunter, Freedom is still crippled by the absence of real online play, something that no amount of cat chefs can compensate for. 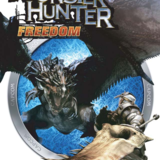