Monopoly Streets admirably brings the famed board game to life, but annoying characters and poor pacing keep this outing from rolling doubles.

For the greater part of a century, Monopoly has done just fine for itself as a game of abstractions, skillfully avoiding any questions of how a thimble and a howitzer can lead to rubbing shoulders with John D. Rockefeller and Andrew Carnegie. Even its Atlantic City locales have long eluded easy recognition in its native country, and key names like Pacific Avenue and Ventnor Avenue regularly conjure images of yellow-and-green cards instead of key streets on New Jersey's Absecon Island. Monopoly Streets boldly backs away from this abstract tradition, allowing up to four contemporary players to see their properties develop in real time on a real city block. It's a logical and welcome step for today's consoles and a somewhat successful one, minus a few unfortunate flaws that spring from pacing, characterization, and a lack of choices among city-based boards.

For the few uninitiated, Monopoly challenges players to build monopolies by acquiring up to three properties of the same color, whether by lucky dice rolls or trades with fellow players. Once you've acquired every property of a certain color, you're free to improve the sites with houses and eventually hotels, forcing players who land on the spots to pay you rent. Eventually, your rent payments climb too high for other players to pay, which forces them into bankruptcy and hopefully leaves you the sole owner of the entire board.

Monopoly Streets takes this winning concept and places the familiar board spots on a gigantic block in Monopoly City, which features three-dimensional structures replacing the simple virtual boards of previous outings. None of the models are particularly memorable and all three consoles are harried by rough graphical edges in a few minor spots, but there are small surprises. For example, you encounter Monopoly's familiar austere railroads brought to life as elevated train stations, Free Parking as a multilevel parking garage (bearing an amusing resemblance to New York's Guggenheim Museum), and the dreary and decaying lots that signify mortgaged properties. Elsewhere, however, the concept fails to follow its own lead. Random non-player characters shamble through the streets, but they never acknowledge you or gawk at your property. New buildings lack any kind of staff, such as doormen at Park Place who could have taken your rent and turned up their noses. Thus, the charm is sporadic at best, and key structures, such as the prosaic income tax building, scream with untapped comedic potential.

Nothing visually defines Monopoly so well as Mr. Moneybags and his merry band of pewter game pieces, and happily, nine pieces make an appearance here. Mr. Moneybags serves as the host, offering wordy and mildly humorous commentary on every move that quickly grows tiring. When starting a game, Moneybags also leads players through the selection of their favorite tokens along with an unalterable accompanying character that complements each piece. (As a console-specific bonus, Xbox 360 players can play as their system avatars and fill cities with their friends. The same option is available on the Wii using Miis, but only after you unlock it, which requires very little effort.) The top hat, for instance, belongs to a kid magician who follows it as it tumbles down the sidewalk on each turn. The battleship belongs to an admiral who may as well have just stepped out of a Gilbert and Sullivan production. Sadly, this potentially strong idea is hit or miss at best, thanks to cloying voice emotes and time-consuming animations, and two characters in particular can quickly ruin your enjoyment. For one, there's the farmer, a ditzy female bumpkin in cutoff shorts who pushes the wheelbarrow token around the block to a stream of nonstop yuk-yuks and yee-haws. Elsewhere, the little girl associated with the thimble gratingly screeches and spins with glee during her entire turn. It's enough to make you turn off the voice-overs before your first match is complete. The music is only slightly better and ends up sounding like the soundtrack to a floor-wax commercial jammed on infinite loop.

The turns themselves can drag on for ages if you leave the game to its own devices. A typical turn runs like so: You roll the dice (which takes two clicks) to the sound of your character's whoops or hollers. Once your character has exhausted his or her excitement and stopped dancing around, he or she then mounts or follows the giant pewter token one step at a time to the appropriate spot on the board. They look at the plot being considered in awe. If it's for sale, Mr. Moneybags slowly waddles up and eggs the character on to buy or auction the plot. By now, you've had your turn for more than a minute, to the likely impatience of your fellow players, and you haven't even bought the land yet. And your fellow players' turns can be equally as long--or longer--given the tendency of online players to abuse the build button. This is unforgivably damaging in a game that's infamous for its epic hours-long play sessions. So sure is the game that your attention will wander during all of this that all three consoles' controllers vibrate when it's finally your turn again. Thankfully, you can skip most animations and speed up gameplay considerably by turning off most animations on the options menu at the expense of losing the game's unique flavor.

Of course, the concept's main attraction is the opportunity to see your properties develop. Upon purchase, each property features a quaintly decorated garden until you can afford to buy houses and hotels, and these, in turn, are built according to the worth of the property. For instance, the ultracheap Baltic and Mediterranean Avenue plots end up with tacky motels dominated by gargantuan flamingos, whereas the breathtakingly expensive Park Place and Boardwalk hotels become towering skyscrapers with gold trim. If this approach has a flaw, it's that there's no variation for each set of plots. Connecticut, Vermont, and Oriental Avenue, for example, all feature the same kitschy crown-topped brownstones when three humorously different eyesores would have been much more appealing. For added visual entertainment, you can watch your towering "corporate headquarters" rise or fall in the middle of town according to your net worth at the end of each round.

At first glance, you could very easily get lost in Monopoly's streets because each move is viewed plot by plot. If you're not already familiar with the game board, in other words, it's easy to lose immediate awareness of where you stand in relation to other players with all of the graphical jumble around you. Fortunately, several nonintrusive identifying markers point the way, such as appropriately colored strips on the edges of sidewalks and banners outside of each property listing how many houses or hotels are on it. Other button options also allow you to see what lies ahead of you or to see the game's current state from above using a classic board.

You can also opt for a change of scenery once you amass enough Monopoly money from completing games in Landmark City, the game's only other virtual metropolis. True to its name, Landmark City features some of the world's most legendary tourist traps (such as London's Big Ben), but it's rather Disneyland-ish and lacks the visual coherence of Monopoly City. Although more cities are scheduled for release as downloadable content, it's a shame that more weren't included in the initial retail package. And if you still can't get used to the alleys and buildings of Monopoly City, you can always play on seven different versions of the trusty classic Monopoly board. These come complete with very basic jungle and winter themes but no building in sight.

Monopoly Streets is designed for four players, with most boards regrettably requiring that all four slots be filled. Fortunately, the game features a decidedly fair AI system that can be set to easy, medium, or hard, and you can add two AI players if you only have two or three human players in your game. At its heart, this is pure Monopoly, and there's virtually nothing wrong with the actual process of playing the game aside from the game's unrelenting insistence on four players. You start the game by tossing dice to see who goes first, you trade property and build houses in intuitive menus, and you buy with the click of a button. The auction process, in fact, is positively entertaining. Here, your opponents' bids are listed on a bar graph from left to right, and by tapping one of two buttons, you can raise or lower the bid dramatically during the course of 20 seconds. If you bid low at the very last second, it's possible to trap your opponents into paying an unnecessarily high price for a plot. Unfortunately, there's no option to turn auctions off if you want to avoid the minigame.

Otherwise, the gameplay is decently customizable, and if you're used to certain nonstandard rules (such as using Free Parking to grab all the money from income tax and the like), you can usually re-create them here. You can also play by standard Monopoly rules or take up some of the game's faster options. These include games like Speed Die, in which you play with an extra die and begin with an extra $1,000; and Short Game, in which all four players start with four random properties. Alternatively, you can play Bull Market, which limits play time to 20 rounds; or Fast Deal, which awards the first player who collects the most color groups; or Jackpot, which radically alters the rules and allows you to sell properties containing houses or hotels. Online multiplayer options for the Xbox 360 and PlayStation 3 offer many of the same options as the offline mode while sticking to standard rules and the faster setups. This includes Bull Market and Short Game, in addition to ranked matches and the option to create custom rules. The ranked matches can be fun, but when your losing rival storms out at the sight of you adding yet another pile of deeds to your stash, the game shuts down and you receive no credit despite however many minutes you put in.

Monopoly Streets's animations may drag at times and the character voices invite the tossing of heavy objects at your screen, but basic Monopoly hasn't felt so fresh in decades, and it's worth wondering what Monopoly Streets may have been like with a little more attention to detail. Sadly, it doesn't feel like a full package. With only two virtual cities in the new style in spite of a whopping seven versions of the classic board, Monopoly Streets seems to place an excessive focus on future downloadable content when it could have stunned its audiences with a packed release containing even one more city. Still, it's saved by its decent customization options, and diverse multiplayer options on the PS3 and Xbox 360. If you're looking for an engaging Monopoly game that doesn't require clearing the table and spending 15 minutes dealing the pieces, then Monopoly Streets may be the game for you. Just make sure you turn off those confounded character voices. 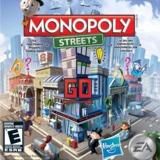