When Monday Night Combat debuted on Xbox Live Arcade last August, it greeted players with a fairly forgettable introduction. The braying announcer, simplistic action, and limited tutorial didn't paint the whole picture, leaving players to push on and discover the joys of this dynamic and entertaining shooter for themselves. Now available for the PC, Monday Night Combat still begins with the same limp intro, but once again, it soon proves to be a novel and engrossing combat experience. The clever gameplay mechanics that worked so well on the console are in fine form here, and developer Uber Entertainment has made a host of small tweaks that preserve the core action and maintain the balance between character classes. These small changes won't be apparent to most, but the effect will be: Monday Night Combat runs beautifully and feels like a natural fit on the PC. Easy to pick up and packed with a diverse array of satisfying and strategic ways to play, Monday Night Combat is a great new place for shooter fans to flex their itchy trigger fingers.

Monday Night Combat has two core gameplay modes: Blitz and Crossfire. In Blitz, which you can play solo or online with up to three other players, you must defend a shiny disco ball full of money from waves of robot attackers. These greedy bots come in many varieties, and each poses a unique threat, from stout soldiers and bounding gorillas to flying suicide bombers and walking mortar cannons. Killing bots earns you money, which allows you to upgrade your soldier's skills, install defensive turrets at designated locations, and use battlefield hazards to your advantage. Money is also the ultimate tally of your triumph in Blitz mode, and if you successfully defend your money ball, your score gets posted to the online leaderboards. Blitz comes in a few different difficulty levels, and while you can complete the easiest mode by yourself without too much trouble, the tougher ones will strain even experienced teams. Beating these challenges and striving for high scores has some limited appeal, and it's a good way to familiarize yourself with the four different turret varieties; the various soldier-specific skills; and the sharp, responsive controls.

That familiarity comes in handy when you tackle the real attraction in Monday Night Combat: Crossfire. This mode builds on the tower defense-style gameplay of Blitz, challenging you to defend your money ball against waves of hostile robots while earning money, upgrading skills, installing turrets, and the like. The twist is that there is now a team of up to six human soldiers behind those robots. These opposing players are gunning for you, assaulting your defenses, and trying to ensure that those hostile robots do make it to your money ball. Once there, the robots tear down the money ball's shields, making it vulnerable to your human opponents who are trying to destroy it and claim victory. While you are embroiled in this defensive effort, you must also make offensive moves of your own by escorting your friendly robots to the enemy money ball and combating your opponents' defensive efforts. With so many potential objectives on the battlefield, the action is perpetually shifting focus as the two teams struggle to find a way to exploit the enemy's weakness while shoring up their own. This six-on-six struggle is engrossing, and the handful of arenas are designed so that any given area affords different offensive and defensive opportunities at any given moment. It's a hectic, novel twist on objective-based competition.

Crossfire presents a clever challenge, but what makes it truly compelling are the six different soldier classes. Each variety of soldier wields two weapons and an array of skills that allow him or her to contribute to the team in powerful ways. The assault soldier is speedy and tough, best played aggressively thanks to his high-damage assault rifle, remote mines, and ability to fly limited distances. The support soldier, on the other hand, can play a more versatile role; shoring up defenses by repairing turrets and healing allies and then taking the offensive by hacking enemy turrets and calling in mortar strikes. The gunner soldier wields a deadly minigun and an explosive grenade launcher while boasting a room-clearing ground pound and the ability to set himself up as a turret to increase his damage and accuracy. The tank soldier can also make himself into a turret or bull-rush his enemies out of the combat arena, and his fiery jet gun is a great reimagining of the classic flamethrower. The sniper soldier is pretty self-explanatory, but his deployable traps and surprising grapples make him a threat from all ranges. And then there's the assassin soldier, a superquick ninja lady who kills from behind, shoots ricocheting shurikens, and traverses the map with alarming speed.

With so many abilities and weapons at play, it can be tough to know where to start. Monday Night Combat only offers a tutorial for the assault class, leaving you to read up on the others in the "How to Play" section of the pause menu. Furthermore, each class can pay to level up its skills, often adding a powerful bonus where you might expect an incremental improvement. With all this variety and complexity at play, the competitive Crossfire can be a bit daunting at first. Yet with so many ways to contribute on the battlefield, even novice players should have no trouble finding a way to help the team. As your battlefield knowledge increases with each match, you really start to get a handle on the action. Then you can begin to explore the finer points of combat. You might be motivated to work on your assassin-killing strategy after taking one too many stabs to the face. Or you might choose to experiment with optimal placement for the support's sentry turret. Learning the range of the tank's jet flame and the capacity of the gunner's jetpack can increase your effectiveness, as can knowing which class can deploy which type of unique robot. After you get past the initial learning barrier, it becomes immensely satisfying to explore the complexity of each class, finding new and clever ways to thwart your enemies.

You also explore different ways of spending the money you earn. Deciding when to invest in a few turrets or to wait for a powerful but expensive ability upgrade is a tricky proposition that changes with each match you play. There are only five maps available in Crossfire, but each has enough going on in it to prevent you from soon tiring of them, and the lengthy list of dedicated servers ensures you can easily find a match when you want one. As you earn money for participating and doing well in combat, you level up and earn new accolades that you can attach to your name. You can also unlock custom classes that allow you to tweak the attribute bonuses, but not the loadouts, of any class you like. This small degree of persistence is a nice little reward for your efforts and offers just enough customization to mix things up without upsetting the delicate balance of power between classes. Each soldier type can be played in a number of ways, and discovering new strategies and maximizing your battlefield effectiveness is an engrossing challenge. The clever combat design and well-tuned class complexity make this a great online multiplayer class-and-team-based, third-person tower defense shooter. And if that's a bit wordy for you, then just call Monday Night Combat a very addictive and very entertaining game. 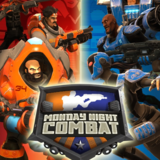 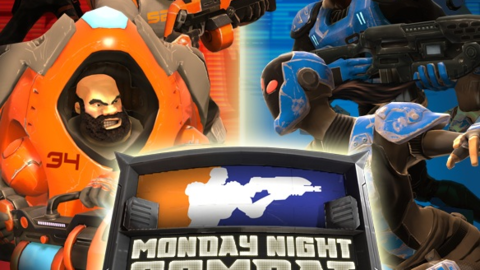