Mojo! contains a number of frustrating and repetitive elements that keep it from being truly enjoyable.

Mojo! is a puzzle game developed by Farsight Studios and published by Crave Entertainment. The game basically requires you to control a metallic sphere around more than 100 different levels, destroying multitudes of multicolored blocks. Along with the single-player game, Mojo! features a couple of four-player multiplayer modes, a level creator, and a rather thrifty price tag. For all its features and value, however, Mojo! isn't a particularly enthralling game, and it contains a number of frustrating and repetitive elements that keep it from being truly enjoyable.

In the game, you control a spherical, marble-like object that you must use to destroy a number of different blocks. There are five different types of basic blocks in the game: red, blue, green, yellow, and mojo. The four color-coded blocks can be destroyed only if your ball is set as the corresponding color. To change colors, you must roll your ball through a color infuser. A number of color infusers are spread throughout each level. Once you've destroyed every colored block in the level, you can then destroy all the mojo blocks. Mojo blocks don't require a specific color infuser to be destroyed, and once you've cleared them all, the level is complete. The ultimate goal is to try to beat each level in a specific amount of time, though simply completing the level before your energy meter is fully depleted will allow you to advance.

There are eight different worlds in Mojo!, each with 10 regular levels and a bonus level. Every level within a world sticks to the specific theme of that world--for instance, one world is set in space, whereas another is set on a tropical island. Every level in the game has its own unique design and set of challenges and pitfalls. Some levels contain magnetic pods that draw you toward or repel you from your desired target, whereas some are simply blocks that destroy you on contact. A wide array of slides, moving platforms, trick barriers, and other elements also make each level unique.

While this is all well and good, there are two major problems that hinder the gameplay. First, while every level is different and unique, the required action is not. No matter how many crazy challenges and pitfalls the game puts in front of you, in the end, you're still just rolling a ball around and breaking blocks. This action becomes very mundane after a short while, and though there is certainly something to be said for the solid strategy involved in the game's puzzle solving, rolling that ball around eventually becomes a flat-out chore.

Adding to this problem is the fact that simply trying to control your ball is an even bigger challenge than all the puzzles in the game put together. Your ball is made out of some type of metal, and it bounces around in a fairly heavy and unwieldy fashion. Several levels in the game contain areas without boundaries or borders to keep you from falling off the level. Normally you can find ways to avoid these, but some levels have curved slides and other frustrating obstacles that, if perhaps you had better control of your ball, might not be as cumbersome to navigate. However, because of the loose controls, you'll more often than not find yourself just rolling right off a ledge or slide without ever really having a chance to keep yourself from dying. While you do have a brake button, as well as a turbo button that can be used to jet yourself forward or violently jerk yourself in the opposite direction, neither of these mechanics helps matters much.

Graphics and sound are not generally of great importance in puzzle games, but even so, it's hard to look past the game's shortcomings in these areas. Mojo! has an extremely dated look and design, with flat, ugly-looking textures and models. This is never more apparent than when you fall off the level, as beyond the actual map, there isn't really anything to speak of. That being said, the game does manage to run smoothly, and there aren't any real glitches or hiccups to speak of that might hinder the gameplay. The game's sound is equally lackluster, though technically competent. Mojo! is chock-full of stock sound effects that were clearly pulled off some public-domain effects CD, and while they fit reasonably into their contextual situations, they're also pretty cheesy. Each world in the game has its own song that plays throughout every one of the levels, and although these tracks aren't bad by any means, they all wear thin pretty quickly.

Though Mojo! has more than its share of problems, the game isn't an entire loss, thanks largely to its multiplayer and level creator modes. The main multiplayer mode is a battle mode that lets up to four players take each other on in multiple arenas. The core gameplay is the same in the battle mode, but you'll also have a number of different power-ups at your disposal to attack your opponents, and the winner is determined simply by who can break the most blocks. The other multiplayer game is a simple mini-golf mode, which you can unlock by completing the single-player mode. The game's level creator is actually pretty good, allowing you to take any of the levels in the game and reallocate all the blocks and pitfalls wherever you please. Though you can't change the actual layout of the level, the mode gives you enough variety to create plenty of varying levels.

Despite its faults, Mojo! is still a passable puzzle game. The core mechanics are sound, and the game's multiplayer modes are well implemented, actually making for some decent fun at times. Any die-hard puzzle game fan will likely garner some amusement out of what the game has to offer, assuming of course he or she can put up with the loose controls and dated presentation. However, those of you with less of an appetite for puzzle solving will likely find Mojo! more frustrating than anything else, and should definitely take a pass on it. 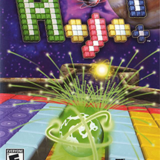