ModNation Racers aims to do for kart racers what Little Big Planet did for platformers: combine an established genre with a powerful creative toolset. It succeeds admirably, with a host of content and customisation tools for karts, tracks, and players, and excellent sharing facilities to easily upload your creations online. The single-player campaign is fun and rewards repeat play with new items, but the multiplayer mode is where the game thrives, with six-player connectivity both locally and online. This iteration isn't as fully-featured as its PlayStation 3 counterpart, but judged on its own merits, the PSP version of ModNation Racers is a fun and rewarding entry into the kart racing genre.

ModNation Racers starts by dropping you into its single-player Career mode--a story-driven campaign where you aim to take a rookie driver to the top of the ModNation Racing Championship. There are two main goals: to finish each race above a certain position in order to qualify for the next event, and to meet objectives in order to unlock new creative content. Each race has its own criteria--you may have to collect a certain number of items or sideswipe a certain number of opponents, while longer-term goals, such as performing 1,000 drifts, unlock even more items. This means that there's a constant flow of new stuff as you play, and the fun and varied challenges add to the game's addictiveness and replay value.

The racing itself should be familiar to karting veterans, as it's based on well-worn genre mechanics. Each track features shortcuts, jumps, and boost pads, while collectible weapons such as rockets and electricity allow you to attack other racers. The basics are easy to understand, but ModNation Racers brings a lot of strategy to its gameplay. You're rewarded with points for jumping, stunting, drifting, and drafting, and these points fill up a power bar that fuels a number of different kart features. You can choose to protect yourself from incoming attacks by diverting power to a shield, go faster by boosting, or take out opponents with a sideswipe. This risk-reward mechanic makes the racing deep and exciting, as you need to master all these facets to succeed.

ModNation's Career mode contains some well-designed and varied tracks that feature insane jumps, devious traps, and time-saving shortcuts. There are a number of different event types too, including straight races, races with power-ups, and the PSP-specific Last Kart Standing mode, where the player in last place is eliminated at predetermined intervals of time. You will run into a few bumpy potholes, no matter which event you tackle. The handling feels a little too light, which means that drifting isn't quite as accurate or satisfying. The challenging AI also makes Career mode difficult at times, and while it's never unfair, beating the challenges to open up all the extra content is a big feat.

Once you start unlocking content, though, the game's creation tools allow you to put these bonuses to good use. You can create your own karts, racers, and tracks, either from scratch or by modifying existing creations. There are an incredible number of items available once you've unlocked them in Career mode, and the tools make applying all this content a breeze. The advanced options aren't quite as bountiful as they are on the PS3--you can change the colour of most objects, but you can't alter their placement or size. That said, once the content has been unlocked, it's still easy to create something unique.

The level creation tools are some of the best yet seen in a handheld game. To create a track, you simply drive out the basic shape in the same way you control a kart, and then customise it by placing items, changing the track material, and deforming the scenery. The tools aren't quite as powerful as they are on the PS3--the game doesn't automatically create bridges when you cross over the track, for example. However, the tools are simple to pick up thanks to a sensible interface design, and it's rather easy to create something people will want to race on. Once you've made your creations, you ideally want to upload them online for others to find and download. Your title and associated keywords help other people find your content, while ratings and downloads allow the best content to rise to the top. It's quick and easy to download whatever content you find to your PSP, and the community has already started to use the tools to create all the things you'd expect, including cartoon characters, iconic '80s TV show cars, and famous tracks from other racing games. The game also does a good job of seamlessly sharing this content among users when you're playing online, because any custom content is downloaded automatically in the background.

While the single-player campaign is fun, the real enjoyment comes from multiplayer. The game offers support for both local and online play for up to six players, which is not huge, but it's the same number of racers as in the single-player game. It's easy to host a game and choose the racing options or to find a lobby and join someone else's game. The only downside is that there are usually only a couple of games available at any given time. Thankfully, there's a separate list of online challenges to complete, so it's well worth playing this game mode to unlock even more creative content.

The single-player campaign is punctuated with animated interludes that are humorous and lighthearted, although the bickering commentators do grow a little tiresome after a while. The pop music may not be particularly memorable, but it keeps the game lively, while the artistic look is complemented by strong technical performance; this is a good-looking game. The load times are thankfully much better than they were in the PS3 version, although the racing hub is gone in favour of a simple menu system. This means that the game doesn't boast completely seamless online integration. Instead, you have to navigate a series of screens.

ModNation Racers is a fun kart racer that brings plenty of its own gameplay ideas to the mix. There's plenty of depth to the racing, and Career mode is long and varied, which makes unlocking new content addictive and rewarding. The game really comes into its own in multiplayer, while the online sharing tools ensure that there's a constant flow of new content coming from the community. If you're a kart racing fan with a creative bent, then ModNation Racers is well worth taking for a spin. 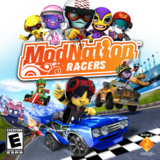 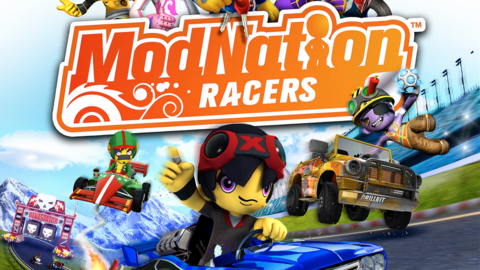 ModNation Racers is a new take on classic kart racing. It lets you mod, share, and race your cars.