Call of Duty: Modern Warfare 3: Defiance is a competent though flawed handheld shooter.

Given the huge fanfare that accompanies a Modern Warfare launch, it's easy for its DS counterpart to slip under the radar. It's understandable, really. Whereas the console/PC version is a high-octane, explosive visual feast full of gloss and gunfire, the DS offering can't help but seem a little ropey in comparison. And while it almost manages to hold its own, Modern Warfare 3: Defiance struggles with poor controls, a number of glitches, and some ill-thought-out checkpoint placement.

Defiance tells a story that is parallel to the main Modern Warfare 3 campaign. It sees you, playing as members of the National Guard and the British Special Forces, trying to repel the invading Russian army. There's little in the way of story, and scenes jump from place to place, with the general goal always being to "kill the bad guys." Cutscenes are lacking in exposition and also lack a subtitle option, and often, the audio is a bit unintelligible. It's not a huge matter, but most of the cutscenes are in game and can't be skipped, so it would have been nice to follow what was being said all the time.

Mechanically, it's fairly typical Call of Duty. You're funneled from gunfight to gunfight, down tight corridors, shooting bad guys as you go, meeting with the occasional turret sequence along the way. There's a decent balance here; you're never overwhelmed with enemies, which suits the small screen. And you have the helpful ability to peer down the sights with a tap of the touch screen, which snaps your view close to an enemy soldier. There are two control methods. The first, using the stylus to aim, is problematic. Finding the aiming sensitivity sweet spot proves difficult, and more often than not you'll end up flailing as you struggle to get a bead on an enemy. Button control works a lot better though. The D-pad is used to move back and forth and to strafe, while the face buttons allow you to look up, down, and turn left or right. Auto-aim comes into its own here too, compensating for the lack of pinpoint control. The touch screen is used nicely in this control scheme too, with the hot spots to change weapons or interact positioned well so that a quick tap of the thumb does little to break the flow of combat.

It manages to be quite exciting at times. Running in, clearing out a warehouse of Russians, switching up weapons, and hurling grenades is all rather fluid once you get the hang of it. It's often difficult to aim precisely, though, and the limited directional control from the four buttons occasionally becomes a problem, especially at close quarters. It's serviceable, though, and once you get the hang of using the iron sight auto-aim, becomes less of an issue.

The turret and helicopter sections are less exciting. There are a few missions that see you providing air support or guidance, and these end up being rather fiddly, slow, and boring. The best is one in which you have to guide your troops below in very rudimentary real-time strategy sections. But later missions--where you have to take down tanks and trucks--can get a bit frustrating given the tight time limits and slow movement of the mounted weapons. Later on in the game, a turret section where you fire from a helicopter proves even more problematic, with the game demanding slightly too much quick-aiming accuracy.

Perhaps more annoying is the poor checkpoint placement. Checkpoints are frequent, and you rarely have to repeat more than two or three minutes of the game, but little thought has gone into where they actually occur. One section early on, for example, has you breaching a warehouse. This requires you to listen to your squad chatting about it and then wait for your squad to get into position so you can plant the charge. If you die in the next few rooms of baddies, you're whisked right back to before the dialogue and are forced to sit there and listen to your squad a second time. Then you have to accompany your squad all the way back before you can dive into the combat again. There are too many checkpoints that follow a similar pattern, and it's a shame a bit more thought wasn't put into the structure. The occasional glitches are also annoying. These usually involve a friendly non-player character blocking a pathway or required enemies refusing to spawn. Quitting to the menu and reloading always sorts it. Because the checkpoints are frequent, there's usually little progress lost, but it's still rather annoying.

Thankfully, the multiplayer fares better than the single-player. Once again, it's exactly what you'd expect from Call of Duty, with unlockable weapons, perks, and customizable loadouts. The progression system is just as fun as always, and there are some nice, small maps that are perfectly suited to the smaller number of players. Diving into a random match is easy enough, although you can't choose your game type. There's also the ability to host or join friend matches after you've exchanged lengthy friend codes. Matches can be played online or locally, and if you have a group of friends all keen on Defiance's multiplayer, this is the best way to play.

There are six modes. Deathmatch, Team Deathmatch, and Sabotage are from the main playlist, while Black Ops' Sharpshooter, One in the Chamber, and Gun Game make up the other three. Being able to play multiplayer Call of Duty on the go is the best incentive to give Defiance a look. Maps are well structured if unremarkable, and they make for a fun multiplayer distraction.

This sentiment applies to the game overall. Modern Warfare 3: Defiance is predictable and sedate yet solid in what it's trying to do. If you're after some FPS action on the go, with some solid if forgettable gunplay and an enjoyable multiplayer component, this game fits the bill. If you're skeptical about the concept of a handheld Call of Duty in the first place, though, then Defiance is unlikely to convince you otherwise. 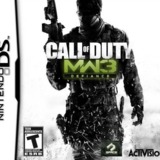 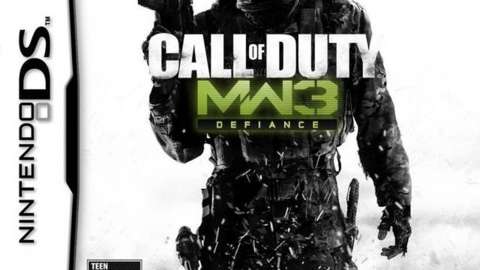 Call of Duty: Modern Warfare 3 is the next chapter in the best-selling Call of Duty first-person shooter action series.

5.6
Sign In to rate Call of Duty: Modern Warfare 3 - Defiance