Take me out to the ballgame.

MLB The Show 19 begins with an ode to spring: the opening cutscene waxes lyrical about the world blooming into color with bright blue skies and beaming sun rays amid the chirping of birds, before moving onto the hope, optimism, and excitement that accompanies a new season of Major League Baseball. America's favorite pastime is synonymous with the transition from winter's gloomy doldrums to the warmer weather of spring, and Sony San Diego's long-running baseball series has become a complementary part of that equation. This is due in no small part to the high level of quality The Show has maintained throughout its lifespan, and MLB 19 is no different, implementing smart new tweaks and significant refinements to its on-field action, while introducing entertaining new modes to its authentic flavor of baseball excellence.

Fielding has received the most substantial improvements out on the diamond, with the Defensive Runs Saved metric coming to the forefront. Now any player wearing a leather-clad glove is more responsive than before, hustling to field weakly hit balls, recovering quickly from botched catches, and utilizing a plethora of new animations to give you added control over the defensive side of the game. There's also a clear distinction between each fielder's individual stats, so if you've got a Gold Glove player like Matt Chapman manning the hot corner, you'll notice how adept he is at reaching balls lesser fielders will have trouble getting to. An outfielder's reaction to the ball jumping off the bat varies depending on their attributes, too, while a new interface makes it easier or harder to read balls that careen off the outfield wall depending on the defending player's skill set. There's an intuitive fielding ability indicator under the feet of each player to give you a quick reference point for how likely they are to pull off a spectacular play versus an embarrassing one, and that means substituting that beefy power hitter you've lodged into left field is now a tactical switch worth considering in the later innings. Each of these changes contributes to a greater sense of control over how your team prevents runs, removing a lot of the frustration that plagued previous games when fielders were often too lackadaisical.

At the plate, batting feels slightly more forgiving this year. There's now a greater distinction between the types of contact you can make with the ball, and a larger variety of hits makes batting more enjoyable. Not to mention pitchers are now actually concerned with self-preservation, so you won't encounter quite as many stolen hits because the pitcher's face was in the way. These changes coalesce to make a strong aspect of the game even stronger, and few feelings can match the elation that arises when you square up a ball and hear the crack of the bat as it flies into a gap in center field.

In terms of modes, the most notable new addition is March to October, which essentially acts as a truncated and more streamlined version of the time-consuming Franchise Mode. In the past, Sony San Diego has made strides in contriving various ways to make Franchise less of a time sink. Being able to expedite a 162-game baseball season by alternating between playing full games or using quick manage and player lock was a welcome change, but it's still a lengthy endeavor that most will still want to simulate through at times. However, there's always an inherent degree of detachment that comes from simming your way through blocks of the season. March to October alleviates this issue by making your performances impact your team's form, even if you're only playing for two or three innings at a time.

At the outset, March to October asks you to pick a team, categorizing all 30 MLB teams based on their expectations as either favorites, contenders, underdogs, or longshots. It doesn't matter whether you pick a team like the Yankees or the Orioles, your ultimate goal is to reach the postseason and win the World Series. The majority of the season is automatically simulated, but during critical moments you'll be dropped into games in a variety of situations to try and earn a positive outcome. These can range from taking over a game in the eighth inning of a blowout with the simple aim of maintaining a shutout, joining in the sixth to break open a tied game, or stepping into the batter's box with two outs in the ninth and a man on second when your team is down by a single run. Your performance in these situations earns you either positive or negative momentum, and this affects your team's results during those simulated games. Obviously, there's a little more leeway here if you're using one of the powerhouse teams as opposed to a relative minnow, but momentum ensures your performance has a palpable effect on how well your team does even when you're not directly involved. Maintain positive momentum and you'll see your team go on a winning run, while the opposite is true if you fail to meet your objectives. You'll also occasionally have the opportunity to use player lock in certain games, with that player earning a season-long bonus if you, say, drive in three runs or crush a game-winning homer.

Completing a full season takes roughly 10 to 15 hours, and winning the World Series at the conclusion of March to October nets you rewards for MLB 19's card-collecting mode, Diamond Dynasty. This won't be a mouth-watering incentive for everyone, and March to October still consumes enough time that there's little replay value involved. Nevertheless, it's an engaging new mode that consistently puts you in situations tailor-made for some thrilling topsy-turvy baseball. It may lack depth due to an absence of roster moves, with a single deadline day trade the only chance to augment your team, but for those who don't have time to commit to Franchise Mode, it's a fantastic alternative.

Moments is another new addition that also drops you into crucial situations, with the key difference here being their historical significance. Playing as the likes of Babe Ruth, Nolan Ryan, Willie Mays, and other icons of the sport, Moments lets you relive the classic plays, at-bats, pitching performances, and playoff series of these legendary players' Hall of Fame careers--complete with authentic stadiums and a black and white filter. It's not a perfect recreation of baseball's past, with plenty of default players on top of contemporary commentary and graphic overlays. There's also little fanfare when you pull off a historic feat, with not even so much as a single line of dialogue. Yet despite these missteps, it's still exciting to call your homerun with The Bambino, mash your way to a .400 average with Tony Gywnn, or win the Chicago Cubs' first World Series in 108 years. Moments also provides another avenue to earn rewards for Diamond Dynasty, beyond giving you the opportunity to play as historic players before unlocking their playing cards.

This is a common through line in MLB 19: Almost everything you do contributes to Diamond Dynasty in some way. This makes it relatively easy to assemble a competitive team without having to spend a dime of real-world money, and there are still multiple ways to engage with Diamond Dynasty in both single and multiplayer capacities, depending on your preference, from playing against others online to conquering maps in Conquest Mode, drafting a team in Battle Royale to ascend a ladder, and completing various challenges. The variety of options mixed with the frequent stream of rewards makes Diamond Dynasty one of the most enjoyable card-collecting modes in the genre.

Elsewhere, Road to the Show introduces a few more RPG elements this year to give dialogue options some much-needed impact. During the creation of your player, you have to choose between reworked archetypes, with each one acting as a physical blueprint for the type of player you want to be. There isn't a level cap anymore, so you can feasibly increase each of your player's stats to 99 overall, but your chosen archetype governs how easy or difficult it is to improve specific attributes. For instance, pick a Small Ball hitter and you'll find it easier to train your speed, fielding, and stealing, while it will be much harder to improve power and plate discipline, with contact and arm strength falling somewhere in the middle. Enhancing these stats still relates to your on-field performance, with a base hit correlating to an increase in contact, and so on. There are new minigames based around weightlifting and other exercise drills, too, allowing you to progress certain attributes if you want to put in the extra work off the field.

During the character creation process you're also asked to choose between four personality types: lightning rod, captain, heart and soul, and maverick. Each dialogue option in Road to the Show relates to one of these personalities, so picking the captain option to give a teammate some encouragement when he's in the midst of a slump will upgrade your captain attributes, which in turn allows you to unlock various perks within a modest skill tree. Reach tier two in heart and soul, for example, and you can activate a perk that improves your hitting ability when in 2-0, 2-1, 3-0, and 3-1 counts, ensuring your dialogue choices manifest in meaningful bonuses when at the plate. Forming a relationship with teammates or an antagonistic rivalry with another team's players will make these perks more powerful as well. Occasionally you'll also be asked to pick between three challenges during particular moments in games, whether it's simply getting on base or striking out the next batter. Each challenge has a boost to stats related to it, with harder challenges providing a more substantial boost if you're successful. This is only a small touch, but it gives you an extra opportunity to improve your player by balancing the risk and reward of picking a harder challenge over a simpler one. There's no doubt smashing a home run over the left field wall is more exhilarating than usual when a 175% boost is active.

As for Franchise Mode, there's not really a lot to say. Contracts now more closely mirror their real-life counterparts, both in terms of years and money, and you can finally re-sign players before they reach the end of their current deal. This adds authenticity to the business side of Franchise Mode, but otherwise it's the same as it has been for a few years now. There's still no team relocation, stadium building, or online Franchise Mode, which is disappointing considering these are staples in other sports games. On the plus side, at least you can now use two-way sensation Shohei Ohtani as a designated hitter on days he's not pitching without having to waste a substitution.

Despite the lack of innovation in Franchise Mode, MLB The Show 19 excels when it comes to the sheer variety of single-player content on offer, while significant improvements to fielding round out the on-field package, making this one of the best baseball games ever. That's not a particularly bold statement considering the series' consistent quality throughout the years, but MLB 19 continues that upward trajectory with its most robust offering yet, guaranteeing another year's worth of excellent baseball.

View Comments (19)
Back To Top
9
Superb
About GameSpot Reviews 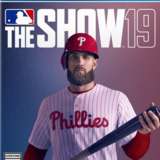 Richard hopes this is the year the Yankees win number 28, but don't hate him for it too much. He played MLB The Show 19 for roughly 30 hours. Review code was provided by the publisher.