Swinging for the fences.

Hitting a baseball might be the hardest thing to do in professional sports. It's a feat not just reliant on athletic ability, but on skill, patience, and finely tuned mechanics. MLB The Show 17 revels in this fact, making each line drive and moonshot feel immanently special. From the emphatic crack of the bat as the ball is sent careening through the air, to the way the crowd rises to their feet with oohs and aahs in equal parts awe and rabid excitement.

Batting in Sony's long-running series has never been better. Previously, the series' ball physics were modelled on a baseball hitting a flat surface, which resulted in the ball taking relatively straight flight paths with minimal spin. I never considered this to be a facet of the game in urgent need of improvement, but now that the physics are based on the trajectory of a ball colliding off of a round bat, the leap in quality is unmistakable. Not only does this enhancement inject a dose of added realism, but it also increases the variety of dynamic hits you're likely to see. You'll witness balls sliced down the third base line that spin just enough to stay fair, bloops that fall between the second basemen and right fielder, and topspin line drives that soar over the center fielder's head before crashing into an outfield wall. I can't count the amount of times I've paused the game after a scorching double, just to hop into a replay and savour the ball's flight path. The physics are really that good.

This isn't to suggest fielders are outmatched, however--far from it. Those patrolling the diamond are more intelligent than ever thanks to The Show 17's Humanity AI. You'll never have to worry about a runner being called safe because your shortstop took his sweet time throwing to first base. Now the AI is smart enough to discern between a speed merchant like Billy Hamilton bursting down the line and the lumbering stride of someone like Miguel Cabrera, and can adapt their level of urgency appropriately. They're going to rush throws for those bang-bang plays at first, and take their time when they know they can; banishing the frustration inherent in the lackadaisical fielding that plagued previous entries in the series, while still maintaining The Show's authenticity. A deluge of fluid, new animations tie all of this together. And while the excellent pitching mechanics remain seemingly unchanged, I do appreciate the visible torque apparent in the game's pitching animations. It's a small detail, but one that edges the presentation closer to reality.

Unfortunately, intelligence inside the dugout aren't quite matched by the brains out on the field. AI Managers still aren't great at handling their pitching staff. I've encountered a few instances where relievers have been left to the wolves, long after they should have been pulled from the mound. The most egregious of these occurred when a reliever was summoned into the game, only to give up 11 earned runs on an unbelievable 136 pitches, before his skipper finally decided he had seen enough. I just felt sorry for the poor guy.

The immensely popular career mode Road to the Show returns and is as engrossing as ever. You can still import a character from last year's game to continue where you left off, or start from scratch to guide a young upstart from the fairgrounds of the minor leagues to the 30,000 capacity ballparks on the big stage. In an attempt to breathe some fresh air into the mode, Sony have incorporated a narrative overlay in this year's game, dubbed "Pave Your Path." It's not as substantial or captivating as the story modes found in the NBA2K series or FIFA 17's "The Journey," but it does add some flavour to what was previously a fairly by-the-numbers affair.

Told in a documentary style--think HBO's Hard Knocks--with each scene described by a narrator, you can choose from a range of dialogue options in various baseball-related situations. It's not a robust system, essentially boiling down to whether you want to be humble or arrogant, and do what you think is best for the team or yourself. There are potential repercussions if you continue to disrespect your organisation and its staff, as you're liable to find yourself on the trading block. But the vast majority of interactions offer little more than an opportunity to role-play and shape the personality of your created player, and it doesn't take long before scenes begin to repeat either.

There are a few big moments sprinkled throughout that have more far-reaching consequences, such as interacting with your new team's owner after the draft, or being asked to play another position. I decided to create a shortstop in my career, and after a measly showing in the draft showcase, I was picked in one of the latter rounds by the Milwaukee Brewers. After crushing it for the first couple of months, my Double-A manager invited me into his office and asked if I wanted to try playing third base for ten games or so. I would get a chance to gain some valuable experience in a new position, and if it worked out, my versatility would give the team more options going forward. So I agreed.

Once those ten games had passed, I was called back into the manager's office and informed that the team wanted to keep me at third base for the foreseeable future. I had played exceptionally good defence in the hot corner, and with Jonathan Villar fully entrenched at shortstop on the major league roster, and a top 50 prospect also manning the position in the minors, it made sense that my best path to the majors would go through another position on the field. It doesn't always work this cleanly--with a created pitcher, my demotion to the bullpen was more contrived than believable--but when the stars align and the trajectory of your career naturally deviates, it makes "Pave Your Path" a worthwhile addition to the Road to the Show formula.

Elsewhere, Franchise has received some time-saving improvements. Traditionally, playing a full 162-game season can be a laborious grind if you're not simply skimming your way through a vast majority of the games. Now there are a few more options on a game-by-game basis if you want to expedite the process and still feel involved. You can still play or manage a full game, or you can cut down the time of games by more than half by selecting quick manage or player lock. The former speeds through games at a rapid pace while still giving you a say in every single at-bat. And, if you want, you can jump in and out at any time and take direct control, even if it's only for one crucial at-bat or two. Meanwhile, player lock lets you play an entire game as a single player, à la Road to the Show. So if you've always just wanted to be Bryce Harper, now you can. These are smart new additions that ensure you can have a palpable impact on all 162-games in a season, no matter how much or how little you actually play.

After card collecting game Diamond Dynasty received a total revamp last year, it returns intact with 30 more legendary players added. So if you've ever wanted to trot out an outfield of Ken Griffey Jr., Ted Williams, and Mike Trout, now you can (provided you're incredibly lucky/willing to spend some cash). And with Griffey emblazoned on the cover, MLB The Show 17 invites some nostalgia with the new Retro mode. With its 8-bit filter and arcade-style one-button mechanics, it invokes old-school classics like R.B.I. Baseball on the NES. It's a fun novelty, but since it's limited to single games, it feels like a missed opportunity without the ability to play a full season.

MLB The Show 17 continues the series' fantastic tradition of consistency and refinement. Improvements to its various game modes give you more ways to play the game how you want to, and the action on the field has never been better, with smarter fielding AI, and enhanced ball physics that bring the hitting to life. Commentary is still a little too stilted for my liking, and there are other blemishes lurking throughout. But when you connect with a fastball and send the ball spiralling into a gap in center field, any issues retreat to the back of your mind. This is America's National Pastime at its best. 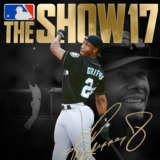 Richard divided his time between every mode in MLB The Show 17 over roughly 40 hours of playtime. He will still continue to watch replays of particularly sumptuous hits.