Sierra has taken a basic, turn-based strategy game, added some beautiful graphics, fantastic sound, and great network play, and set it into their expansive Earthsiege universe.

MissionForce CyberStorm is a truly pleasant surprise. Sierra has taken a basic, turn-based strategy game, added some beautiful graphics, fantastic sound, and great network play, and set it into their expansive Earthsiege universe. The result is amazingly addictive. Even bogged down by a stomach flu and no sleep, I found myself crawling back to my desk day after day to continue my war against the evil Cybrids.

Unlike many other strategy games, which contain only enough plot to explain to gamers why they're trying to kill everyone else, MissionForce CyberStorm uses its storyline to hypnotize you into playing “just one more mission.” You start the game as an Ensign in Unitech, a corporation that achieves power and profit through planetary mining. As a Unitech soldier, you must fight off the mysterious Cybrids using giant mechanical warriors called Hercs and their genetically engineered pilots, the Bioderms. As the game continues, your successes will earn you higher rank, which in turn will give you the right to command more Hercs and Bioderms and more advanced technology. Several subplots, involving an almost religious rebellion by the Bioderms and the discovery of some extremely unusual Cybrid experiments, will keep you glued to your screen hoping to glean just a little more of the story from each successive victory.

The game itself is just as entertaining. You choose from a list of nine missions, ranging from simple mining operations to assaults on enemy headquarters, earning extra cash for each Cybrid you destroy and each unit of ore you mine. You can tackle missions in any order you choose, and are never forced to move on to the next system until you feel ready. As you increase your rank and cashflow, you'll be able to design custom Hercs that incorporate futuristic technology ranging from armor-crushing particle beams to shield-lifting EM blasts. Every piece of technology you add has to be carefully considered for its weight, energy use, and price if you want to survive to see the next battle.

CyberStorm is great as a standalone package, but Sierra has also included a flexible multi-player option as well. You can take on your friends in a head-to-head competition over the modem or through a direct link, or up to eight can play in a network. The network mode includes team play that lets two or more groups compete with or without Cybrid interference, a free-for-all that lets up to eight play individually (once again, with or without Cybrid activity), and a cooperative mode that lets everyone play as a team against the computer. If all of this isn't enough, Sierra has also had the decency to include two copies of the software in each box to allow friends to compete with just one purchase. It's too bad every company can't pick up on customer dedication at that level.

In the end, CyberStorm won't appeal to everyone. Its turn-based style will seem a little dry to action and real-time strategy fans, and military fanatics probably won't go for its futuristic setting or lack of statistics. But if you're wanting a solid title that will give you both long-term individual play and a chance to compete with your friends, I highly recommend this excellent game. 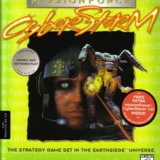 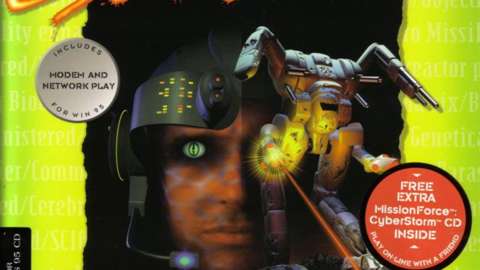 Sierra has taken a basic, turn-based strategy game, added some beautiful graphics, fantastic sound, and great network play, and set it into their expansive Earthsiege universe.