Mischief Makers is a good game that will leave players wanting more.

Long regarded as one of Japan's most imaginative and skilled development teams, Treasure is responsible for many of the Genesis' classic games. Boss-heavy games like Gunstar Heroes and Dynamite Headdy gave Treasure and its "gameplay-with-a-gimmick" design philosophy a cult following throughout Japan and the US, despite its games' less-than-ideal marketability. Regardless, Nintendo 64 owners waited to see what 2D feats Treasure could accomplish on the most 3D-intensive machine. Perhaps the most ephemeral of Treasure's games to date, Mischief Makers is a good game that will leave players wanting more.

Marina, the star of Troublemakers, is the robotic housekeeper to Gumble, a kind-hearted old man living on the peaceful homeworld of the Nendoro's. For reasons unknown, a faction of belligerent Nendoros have kidnapped Gumble and, as one might expect, players must help Marina rescue her touchy-feely master from the pugilistic Nendoros and uncover the mystery behind their sudden aggression.

While hardly a master of karate, Marina's hands are deadly indeed. Using her superhuman strength, Marina can pick up enemies as well as pick up objects to chuck at her foes. Also, Marina can shake whatever she's holding, revealing items in the enemies' pockets or activating item-combining mojo pots. In addition to her offensive moves, Marina has a small jet pack that gives her an extra boost and lets her activate switches and the game's myriad transportation devices. Many of MM's levels are puzzle-based, requiring the full use of Marina's moves and some thinking, as opposed to the action-mania supplied by most of Treasure's games. Some levels are somewhat slow until Marina encounters the bosses, and then the game's pace immediately picks up.

Treasure has a penchant for bosses, and while the game's level-end bosses are among Treasure's finest, the mid-bosses are simultaneously some of Treasure's least remarkable. Each segmented, transforming level boss requires you to use all Marina's skills, but once you figure out the bosses' weaknesses, these skirmishes are decidedly short-lived. In fact, MM's fleeting nature is its primary fault. Spanning roughly 50 mini-levels, ten of which are game tutorials, players are bound to complete the game within a few days of purchase thanks to MM's save feature and extremely low difficulty level. Because of the short play time, the game feels underdeveloped and falls short of the full potential of its inventive design. To top it off, the only replay incentive lies in the yellow crystals hidden in each level - the more yellow crystals you collect, the more of the text-intensive ending you can see. Needless to say, replay and mastery of all the levels are not well rewarded, so most of you will probably opt to shelve the game after completing it for the first time.

Graphically, Mischief Makers is initially impressive and constantly cute, but the limited space of the Nintendo 64 cartridge was obviously an issue in development - virtually all the game's levels are compose of a small set of tiles and objects. Polygons are rarely used, and they serve as bland, poorly textured backgrounds when they are used. The most impressive graphics in the game, big surprise here, come in the form of the insane bosses, who fill the screen with animation and graphic effects. While the overall game is hardly an eyesore, you can't help but think how much the game's visuals could be improved with more storage space. The game's sound suffers from the storage constraints as well. The traditionally bizarre Treasure tunage, this time mostly comprising distorted oohs and aahs, is catchy and appropriate. Each track, however, is reused extensively throughout the game, meaning you will hear the same music time and time again. Sound effects and voices are relatively few as well, once again underscoring Treasure's need for a larger medium.

For what it is, MM is a solid title, but the terseness of the game and the limited graphics and sound make evident that it could have been so much more, transcending the decent game it is now to become a truly excellent one on another medium. 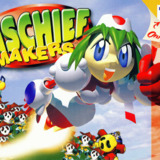 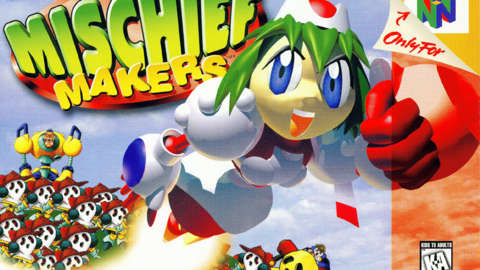 Mischief Makers is a good game that will leave players wanting more.