Minority Report's uneven presentation and its incongruence with the spirit of the movie make it just another bad licensed-property video game.

You might think that Treyarch's competent game adaptation of the Spider-Man movie would bode well for the developer's latest movie tie-in, Minority Report: Everybody Runs. You'd be wrong, though. This title is more in line with the licensed-property cliché of uninspired gameplay that is completely tangential to the movie. It's exactly in line, actually, and embarrassingly so. Though, to the developer's credit, all three versions of the game are more or less equal. The Xbox version has a smoother frame rate than the other versions. The PS2 version can get choppy, and the resolutions of the textures are lowered. Otherwise, the game plays the same on all three platforms.

The plot of the Minority Report game is loosely coupled to that of the movie and the Philip K. Dick short story upon which the movie was based. The setting is Washington DC in the year 2054. You assume the role of the Precrime Division's captain, John Anderton, stopping murders before they happen thanks to the information provided by three precognitive mutants. When the precogs foresee you committing murder, you become the target of your own organization. The similarities to the source material diminish from there. A few choice scenes somewhat ape ones from the movie, but the resolution of the plot is entirely different, and due to likeness rights issues, the bulk of the characters bear no resemblance to their movie counterparts. It would have been better to just make a new story with the same setting than to half redo the movie with unrecognizable characters.

The goal in each of the 40-plus levels in Minority Report: Everybody Runs is merely to get to the end, but along the way there are plenty of Precrime officers, mall security guards (available in two varieties: fat and skinny), guard bots, spider bots, and rioters and riot cops. Most of the time you'll want to just evade them and move forward through the level, but quite often the game will force you to fight, because in the future, certain doors open only if you knock out enough policemen or disable enough robots in front of them. Rumor has it these special doors were invented by game designers a long time ago, and they are valued by the architects of the year 2054 because of their durability and status as antique curiosities. The game does at least tell you when you've come to an area with such a door so you won't waste time trying to find a way to progress, but the artificiality of it all just doesn't jibe with the way the movie flowed. There are only a couple of times when you could actually get the feeling that you're on the run like in the movie, but even in those areas the game never actually requires it. Ultimately, this game might as well have been titled "Minority Report: Everybody Pummels Hundreds of Cops." There's no "scrubbing" element (the analysis of the precogs' visions) present in the game either, which is a big disappointment if you liked those parts of the movie.

The shoehorning of the combat-oriented gameplay into the Minority Report license might have been forgivable if the developer hadn't made a number of odd gameplay decisions as well. Chalk it up to Treyarch not being mindful of what worked and what didn't in the side-scroller beat-'em-ups that came before. The main gameplay element that should have been arrested for the future ruining of this game is the continue scheme. While other games of this type allow you to continue in same place you died, just resuming the fight with full health, Minority Report forces you to restart the level. Some levels are quite long, and some have a few fairly difficult brawls, making the proposition of starting them over a few times more than a little unpalatable. The other big lesson that went unlearned is variety of characters. There are about 10 stock characters and five bosses, not even close to enough for 40-plus levels of game. The two types of Precrime officers get different skin colors, armbands, and weapons, but otherwise none of the characters vary in the slightest. Rarely, some characters exhibit a little bit of personality by taunting you, but the sound used in the brawls is mostly limited to the sound effects of hitting and three or four different grunts of pain when someone gets knocked down. A little bit of variety comes from being able to throw opponents to their death from great heights. If you can get past the cognitive dissonance that comes from throwing someone--someone with whom your character used to work, no less--off a rooftop while attempting to prove that you're not a murderer, then you'll be treated to some great screams that unfortunately fall off way too quickly due to a poorly implemented sound engine. Anderton's hearing radius appears to be about 20 feet.

The combat is repetitive as far as technique goes as well. While collecting money throughout the levels will allow you to buy new hand-to-hand combos, all the combos are simple three-button-press punch, kick, and guard maneuvers, with some slight variation if you hold the final button instead of tapping. What's worse is that even the most expensive combo does only a slight amount of extra damage, making only one really worth knowing for its ability to knock back opponents who are approaching from your flanks or rear. Otherwise, it's easier just to use regular punches and kicks until you can pick up a gun. Well, you can also grab an opponent if no one else is close by to make you drop him and if the game doesn't inexplicably decide to not let you grab. Grabbing an opponent has a few uses: throwing him at someone or, as mentioned before, off something; finishing him off with a seemingly unnecessary number of knees to the midsection and punches to the face; or employing him as a shield against armed opponents, because his friends will ignore the fact that he's between their guns and you and unload with all they have. There's not much AI at all, in fact. All your opponents just move in and hit you, unless they have guns, in which case they will shoot at you at regular intervals without any regard to your range or others. The sole exceptions are the mall security, who have a rushing attack that unfortunately is more often than not performed from offscreen.

The only area in which Minority Report really makes good use of its license is in the graphics, though there are plenty of rough areas. On the plus side, they were able to more or less accurately reproduce the effects and look of the concussion gun, the jetpack, the hoverjet, and the spider bots. The game's Precrime HQ is also an excellent reproduction of the movie set. But these are all no doubt the product of assets and techniques previously created for the movie. The game's original content is not as impressive. While level design features architecture and art direction that sufficiently resembles that of the movie, it falls a bit short on realism, especially in the area of lighting. Shadows aren't done properly at all, and it's extremely noticeable in one area where Anderton is standing on a ledge, and his shadow is on the ground below with no other shadow around it. The character animation has similarly glaring flaws, which range from missing key frames between Anderton's normal and guard stances, to close-ups on realistically textured faces that do not animate anywhere except the mouth, to an almost-good rag-doll skeletal animation system with unrealistically loose limbs. It's interesting to watch in action at times, but unless there's some dietary supplement in the future that allows 300-pound mall cops to do the splits, a lot of the time it looks more like a gimmick than something that adds realism.

Treyarch tried to add some long-term playability to the game, but its attempts are at best campy and odd and at worst completely uninteresting. Meeting certain goals will unlock alternate skins for John Anderton, including a lizard man, a zombie, and a clown. You can also unlock an arena of pain that pits you against multiple clones of one of the boss characters on a completely flat, nondescript gray floor. Why this wasn't expanded into a multiplayer mode is a bit of a mystery. Regardless, there's no replay value in this game at all.

Minority Report's uneven presentation and its incongruence with the spirit of the movie make it just another bad licensed-property video game. It's not entirely devoid of enjoyable moments, but said enjoyment is fleeting and wholly unrelated to the source material. It's just one of those games where the license plays the part of the cart and the game is the horse, and the developer didn't bother to figure out a way to hitch them in the right order before starting work on the game. 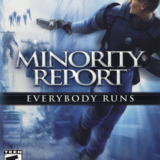 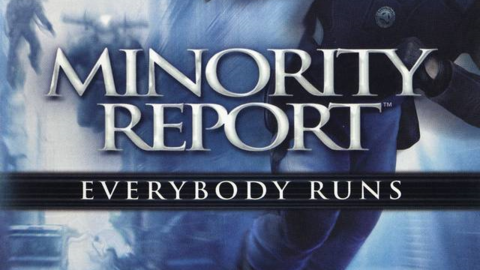 Minority Report's uneven presentation and its incongruence with the spirit of the movie make it just another bad licensed-property video game.