Whether you're big or small, there's a lot to like about these little ninjas and their lengthy journey.

Mini Ninjas is a decidedly different turn for developer IO Interactive, maker of the Hitman series. This action adventure is low on gruesome assassinations and high on lighthearted fun, but that doesn't mean fans of stealth-kill simulators, or anyone else for that matter, should skip over it. Mini Ninjas is an approachable and enjoyable game with a charming art style that brings its lively world to life. There are a few kinks that present some minor annoyances, but they don't detract too much from what is overall a delightfully plucky adventure.

The story is a straight-up ninja road trip. It follows the young ninja Hiro and his portly friend Futo as they embark on a mission to find their four missing ninja pals and stop an evil samurai warlord from taking over the world. On their long journey to the warlord's headquarters, the two little ninjas will find their friends, learn new spells, and battle magic samurai. There's not much narrative, but what's there is entertaining and often humorous. The cinematics that are unlocked when you find each ninja aren't included in the campaign for some reason, but they're worth seeking out in the main menu and watching. They're extremely well produced, beautifully animated, and funny to boot.

Mini Ninjas is a linear adventure split up across sprawling levels. However, the journey is more than a simple waltz from point A to point B. The broad and inviting level design encourages exploration and creates the illusion of a lush, open world. Each level has a sprinkling of hidden paths that lead to shrines, enemy encampments, or collectibles, some of which are used to mix helpful potions. You'll also find shortcuts that can lead you around a confrontation, and scenic paths that are as treacherous as they are beautiful. The level design does a great job of making the game feel like one cohesive journey, a singular quest to rescue friends and defeat the bad guys.

There are a variety of ways for you to take down said bad guys. Each character has a strong attack and a weak attack as well as a special move inspired by his weapon or personality. Hidden shrines in many of the levels will unlock new spells, like the ability to control any of the animals you find hopping around or stuck in cages. It's fun to free a caged boar from an enemy encampment and then use that same boar to chase down enemies for some sweet swine vengeance. If you'd rather keep your ninja action traditional, you can purchase or find projectile weapons like shurikens and cherry bombs. Using them isn't as fun as sending flaming meteors down on your enemies, but they're effective nonetheless.

Despite all the options, the relatively simple combat--which doesn't usually require much more thought than mashing the attack button--gets repetitive toward the end of the game. That's because some of the spells, weapons, and even ninjas, aren't worth using. With his magic abilities and homing-attack special move, Hiro is by far the most useful character. Unless you just like the looks of other ninjas, there's no compelling reason to use some of them. The developer went to the trouble of giving each of the six ninjas a different weapon, personality, and set of animations, so it's unfortunate that there aren't more reasons to use them all.

In addition to the ninjas' various combat techniques, Mini Ninjas features a simple stealth system that lets you hide in tall grass or on rooftops. You can sneak-attack an enemy for extra damage or skip a fight entirely by staying out of sight. Sometimes it's hard to tell what enemies can and can't see, even if the stealth icon is showing that you're hidden, especially when enemy archers are on the rooftops. The enemy AI follows the same pattern in every fight: they swarm you at first sight and then spread out (or run in fear) as you thin their ranks. If you'd rather run for the woods and skip the fighting, you can do that, and the enemies won't always follow, but you'll miss out on gaining experience, which is used to increase your health, your special-move capacity, and more. It would have been nice to receive experience rewards for stealth. If you sneak or run your way through most of the game, you'll end up with an underpowered group of ninjas.

The controls are silky smooth: wall runs, stealth kills, and special moves are easy to pull off and fun to watch, because each ninja does every action differently from the other five. For example, Suzume spins her flute in the water like a motor boat, while Futo uses his giant hammer as a paddle. When you're not pressing buttons to fight, your second thumb will be at work on the right analog stick, constantly adjusting the struggling camera. It does an OK job as you run through the countryside, but it has a tendency to hang back and lag behind once you start making sudden turns, which is a real pain when you're indoors.

It might not blow you away at first glance, but Mini Ninjas' consistent and attractive art style will win you over in time. The characters and environments are charmingly simple, like vector art or the 3D version of a 2D flash animation. Everything fits together perfectly, and not a single stone looks out of place in this world, making it a joy to explore every inch of every level. The time of day is different in each level, which helps create the illusion of a long journey. One level is bathed in a yellowish dusk and another in midnight blue. The difference between the three versions of the game are negligible, though if you have a PC that can run it at the highest settings, you'll get cleaner textures and crisper, more vibrant colors with that version.

The music sets the mood perfectly with authentic-sounding Japanese instruments--a lone flute accompanies your isolated exploration of a snowy mountaintop, while a chorus of drums plays as you descend during your frantic escape. The sound design balances the serious and somber tunes with silly screeches from the enemies and popping sound effects as they poof back into their original animal forms.

Mini Ninjas is a great start to what could well become a staple franchise for Eidos and IO. If you're hunting for collectibles, you'll easily spend eight to 10 hours on your journey. Even on the hardest setting, the game is never unbearably difficult. The bosses all follow predictable patterns, and fighting enemies is often optional, so most of your frustrations will come at the hands of the poor camera. But Mini Ninjas makes it easy to see past these issues and have a great time. 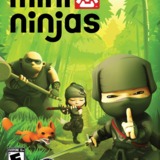