Mindjack's chilling vision of the future is smothered by awkward controls and poor storytelling.

If you wait at the title screen of Mindjack for a few minutes, you can see a video that is better than the game itself. In the short clip, you see disembodied minds zipping through the air and hijacking people as they go about their daily business. These minds turn policemen against their fellow officers and lovers against their partners, transforming an ordinary day into a brutal firefight. It's a menacing scenario that, regrettably, Mindjack fails to deliver on. You can indeed take control of civilians, enemies, and robots during combat, but they all move with a lumbering awkwardness that hampers the action significantly. Both enemy and friendly AI are lackluster, often ignoring the bullets hitting them or forgetting to shoot their foes. The multiplayer options liven things up a bit, because you can join each other's games as either a cooperative ally or a counteroperative enemy. But even the sinister delight of playing the villain soon wears thin because poorly executed gameplay mechanics continually plague Mindjack.

The idea of a noncorporeal consciousness that can fly through the air and invade a human brain is intriguing and frightening, but the story of Mindjack barely scratches the surface of the profound societal changes this kind of technology could create. Instead, it begins as a bog-standard spy drama, complete with "unlikely" allies and "unexpected" twists that unfold in a very predictable fashion. Worse, once the plot attempts to engage its dark subject matter, it is so out of sync with the rest of the action that you're likely to wonder if you're misinterpreting things (you're not). The cliche banter between the hotshot male agent and the standoffish female agent offers no respite from the weak story, though you might get some inadvertent chuckles from the guy, who often sounds like he is yelling at inappropriate moments.

While your remarkable abilities don't seem to play an important role in the story, they do factor heavily into the action. The easiest way to leverage your brain power is to mind-slave weakened enemies and turn them into allies. Their intelligence doesn't improve at all, but they give your enemies a handy bullet sponge to target while you take potshots in peace. You can also pop out of the main character's body and zip into an enslaved enemy, an idle robot, or a cowering civilian. This move certainly has some novel appeal and is a great way to pull off some deadly flanking maneuvers. Turning an enemy's floating rocket drone against him is definitely satisfying, while making a terrified businesswoman stand up and coolly blast an enemy's brains out is a different kind of thrill. It is empowering, in a way, but civilians are less resilient than most of the other characters in the game. You might burn through three repairmen during the course of a skirmish, and while this sort of carelessness has no gameplay consequences (as long as the two protagonists survive, you're good to go), you are basically using innocents as disposable footsoldiers. This is a grim vision of the future, but Mindjack barely manages to set the stage. It's up to you to put on the show and weigh the significance of your actions.

Unfortunately, no matter what character your disembodied self is currently controlling, movement is stiff and cumbersome. Every character moves in a robotic way that makes you feel disconnected from the action. You move around the battlefield slowly, but when dodging or running, you move with abrupt speed that feels inconsistent with your character's abilities. The controls feel stilted and unnatural, but since all the characters seem bound by the same restrictions, you can still have some intense firefights. These mostly test your accuracy from behind cover and your ability to dodge incoming rockets, but once you get accustomed to the problematic controls, there is a certain amount of skill at play. Just don't waste too much time with the melee attack. Landing the one-button combos is incredibly finicky, and if you take a human shield, make sure your enemies fill him with enough bullets to kill him. Otherwise, your only option is to release him and have a close-quarters shoot-out.

Mindjack's movement awkwardness extends to the enemy AI, which aspires to competence. The best strategy your enemies can manage is shooting at you from behind cover, but it's not rare to see them running around the battlefield nonsensically as if caught in some broken logic loop. They are fairly good shots, though, so if you occupy some other character, you still need to keep an eye on the two protagonists. A helpful healing ability can save them from incapacitation, but you won't be able to use this skill as every character. If both protagonists go down simultaneously for 10 seconds, you fail the level and must start again.

Between the clumsy controls and your abundant opponents, Mindjack poses a decent challenge that can get much harder if you choose to let other players join your game. They can come in as allies, but more often than not they enter as invading enemies and make things significantly tougher. Up to six players can be in the same match, though this flexibility can result in some frustratingly lopsided contests unless you limit the number of players that may join. Getting your progress impeded can be vexing, but it can be more satisfying to conquer human enemies than the AI, and if your match is unbalanced, it's easy to find one that isn't or just shut out the invaders entirely. Fighting to spoil someone's progress has a dastardly appeal, and even if you lose during a certain scenario, the next one brings a change of scene and new characters to mindhack.

Yet even the thrill of being the bad guy dulls before too long because Mindjack's gameplay mechanics are so inelegant. It's hard to enjoy a game when you can't move the way you want to move, and beyond the cool premise and intriguing mindhacking ability, Mindjack doesn't do you any favors. Whether it's your friendly AI parking itself in your gunsights, or the dull bosses that can barely muster the energy to dodge your attacks, every part of this game is tainted. Mindjack does have a few bright spots, but they are smothered beneath the weight of the awkward controls and squandered potential. 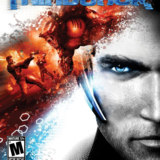