While Milo's Astro Lanes gets a resounding nod of approval for its daring immersion into subculture (albeit, three years too late), there's very little here to recommend a purchase.

It's a shame there aren't more bowling games out on console systems today. In the abstract, bowling games can appeal to the senses in ways similar to golf. Most, if not all of the action is strategized before the ball is actually sent on its way so that at the moment of release, players relinquish the reins of control and rely on the game engine to process whether or not the execution was effective. Unlike bowling, golf's mainstream appeal has paved the grass green for golf games on both consoles and PCs. Bowling titles, on the other hand, appear to be financial roulettes for game developers. Enter Milo's Astro Lanes, developed by Player 1 and published by Crave Software for the Nintendo 64 - the system's first and only bowling title. Player 1 adds plenty of twists to the game of bowling in an attempt to spice up the game of bowling, but in the end, this also becomes the game's undoing.

In a sweeping thematic decision, everything in Milo's Astro Lanes swings with the happy-go-lucky veneer of the atomic golden age from the 1950s. The end result is that the art direction is strikingly Jetson-esque, sans the Flintstones contrast. It's the 22nd century, and you're Milo, a "techno-wiz" who spends his days honing his skills for the Astro Games (bowling). The Astro Games are televised across the universe and attract competitors from all reaches of the galaxy. The manual excitedly points out that "the Astro Games uses an exciting blend of bowling and miniature golf, both extremely popular during the 20th century!" Go figure. Milo's Astro Lanes has two main modes of play: league and versus. In league mode, you compete against other Astro Bowlers for the elusive Astrolight Trophy while unlocking all 12 lanes available in the game. Each bowler begins by selecting an Astro Ball, which has no effect on performance, only aesthetics. Aside from Milo, there are five other characters you may choose from. As expected, each character has different throwing characteristics, which can play a role in your bowling style. There is something strangely appealing about the heavy-handed kitsch found throughout Milo's Astro Lanes. While the character design is generic, it is also offbeat enough to stir up cult-status affections, if you're into that sort of thing. Planetary, galaxy, and cosmos make up the three different categories in league play. There are four lanes per league - you must progress through each one in order to ascend towards the Astrolight Trophy. The matches are standard ten-frame games run on established bowling rules (spares, strikes, three tries in the tenth frame if you spare or strike, etc.) Controls in Milo's Astro Lanes are very straightforward. The A button throws your ball down the lane, while the B button cycles through available power-ups, and the R button is used to zoom in on the pins (in case the in-game graphics are too blurry, and no I'm not kidding). The control stick is used to move an arrow that determines the strength and hook desired on each throw. All in all, the game is a snap to learn. There are also "puzzle" bonus lanes that Milo and his cohorts will need to pass in order to move forward. These puzzles are one-frame games where you will need to take down all the pins within three tries. Bonus lanes also help you accumulate power-ups, which is Milo's Astro Lanes' most important offering to the bowling genre. Versus and practice modes are also available, and each is fairly self-explanatory. Unfortunately, you will only be able to access the lanes already unlocked in one-player league mode, which tends to put a damper on the pick-up-and-play mentality so important to classic party games. Since this is supposed to be bowling at its wackiest, Milo's Astro Lanes sports a total of eight power-ups that will either help you or impede your opponent. Power-ups such as Mega Ball turn your bowling ball into a life-sized Mayan deathtrap. Other specials include Clone Ball, which clones your ball three times for maximum area effect; White Dwarf, the power-up that doubles the ball's weight and strength of impact; and Booster Ball, which acts like a shot of nitrous oxide for your bowling ball. As your turn comes up, all specials held by the other players change into anti-specials. These anti-specials counteract the effects cast by the specials so that at any time during a match, you are constantly trying to stymie each other's game. Throughout the game, you collect these specials by hooking the trajectory of your ball into the icon placed on the lane. This, of course, adds a new element of strategy since you can send it down the right side and take out two pins for a spare or opt for the special and lose the frame. The advantage here is that you can store up specials and use them at any time to rock the competition.

While this innovative power-up system adds another dimension to the gameplay of Milo's Astro Lanes, it doesn't necessarily render the game any more fun. Sure, nobody was expecting a bowling simulator, but at the same time, Milo's Astro Lanes feels like anything but a competitive game of bowling, intergalactic or not. Instead, most of the game is spent gathering specials to counter your opponents' attempts at using power-ups. Another problem with Milo's Astro Lanes lies within the actual physics of the pins themselves. Part of the psychology of bowling requires that a hard throw be rewarded with a spectacular squall of flying pins. Unfortunately, this is one characteristic of bowling that's flagrantly lacking in Milo's Astro Lanes. Upon impact, there's only a subdued flurry that's quickly reset by the camera, and it's on to the next toss - a thoroughly unsatisfying experience. Graphically, Milo's Astro Lanes is a mixed bag of uninspired space-age bachelor-pad rip-off motifs and stylistically "far out" levels. While the character models are competently rendered, they all clearly lack any form of motion capturing, which would have really helped the game visually. However, most of the time will be spent looking at pins and alleys, and in this respect, Player 1 has done a decent job. Most of the lanes have a certain flair that distinguishes them from one another, as well as physical challenges that you will need to overcome in order to reach the pins. There are more difficult times when some of the lanes are completely bereft of eye candy, and players may find themselves nit-picking due to general lack of stimulation. The biggest fault to be found with the Milo's engine is that the graphics are a tad on the blurry side. It's often difficult to see just how many pins are left standing at the end of the alley without using the R button for a closer look. Another qualm with the graphics is that the low-resolution textures really make the game look somewhat dull and unfinished. To put it mildly, Milo's Astro Lanes looks tacky and obtuse. And yet, as mentioned earlier, there is something peculiarly likeable about all this cheese. It's definitely hard to pinpoint, but it may have something to do with a gamer's affinity for a company that actually goes out on a limb in order to design something this goofy. If nothing else, Player 1 needs to be recognized for its bold "niche" gaming tactics. There's comic relief to be found, but only if you're in the mood to look for it.

One of the biggest highlights about Milo's Astro Lanes is the music. OK, if space-age bachelor-pad muzak isn't your thing, shrug your shoulders and move on. But for those out there who can appreciate a little pop-cultural kitsch, Milo's will have you humming for... well, hours (days would be pushing it). Taking into consideration the oft-associated connections between bowling and lounge, the soundtrack here is entirely appropriate and really likeable. Again, all usual kitsch disclaimers apply. The sound effects, on the other hand, are dismally run-of-the-mill - just the usual bleeps and bloops to indicate action, motion, impact, etc. Simply turn up the music and play the game. No need to ignore the sound effects, as they eventually seem to fade into the background.

While Milo's Astro Lanes gets a resounding nod of approval for its daring immersion into subculture (albeit, three years too late), there's very little here to recommend a purchase. The multiplayer game of specials and anti-specials is certainly inventive and challenging, but poor physics and simplistic controls will keep return visitors at bay. There are a lot of good ideas at work in Milo's Astro Lanes; it's just too bad Player 1's innovations on an established genre landed it a gutter ball. 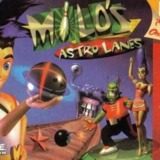