Three enjoyable but bare-bones arcade ports that tragically lack a high-score save function.

Of the three Atari retro game packs that DSI Games has published recently, the one containing Millipede, Super Breakout, and Lunar Lander offers the best selection of games, but also the fewest extras. On the cartridge are three accurate but bare-bones arcade ports that lack anything so much as a high-score save.

Starting off the collection is Millipede, the 1982 sequel to Centipede. Once again, players find themselves in a mushroom field, shooting at the insects that appear from the top and sides of the screen. Millipede ups the ante from Centipede by doubling the number of enemies, increasing the overall speed of the game, and also by letting players choose from three different difficulty settings. It also introduces DDT bug bombs into gameplay. Just shoot one with your bug shooter and it'll explode into a giant insect-killing cloud. The version of Millipede in this collection is based on the original arcade game, which sported a more vibrant color palate than its Atari 2600 counterpart.

Next up is Super Breakout, the 1978 follow-up to Breakout. Super Breakout doesn't change the basic play mechanics at all. Players still have to bounce the ball into walls of bricks by moving the paddle at the bottom of the screen. What Super Breakout brings to the table are three awesome new play modes: double, cavity, and progressive. Double mode puts two balls into the play area at the same time. In cavity, you start with one ball, but there are two additional balls stuck inside the mass of walls. When you release one, it joins the playing field. Keeping track of as many as three balls at once not only makes games more intense, it also makes them finish faster. The other play mode, progressive, has a distinct Tetris vibe. When a wall is destroyed, the entire mass drops down closer to the bottom of the screen--which causes the ball to return more quickly.

Capping off the collection is Lunar Lander, a tough-as-nails moon-landing simulator. In the original arcade game, players used a rotary dial and a throttle lever to maneuver a lunar lander module onto the moon's surface. Here, the directional pad and buttons function as the throttle and steering controls, respectively. The game is extremely challenging, because you have to keep the ship's angle and speed within safe limits and land without running out of fuel. The arcade game, released in 1979, was Atari's first vector graphics game, but what impressed people more was the way the screen zoomed in as the lander approached the moon's surface. The version included on this cartridge duplicates the look and feel of the arcade game perfectly.

All three games look, sound, and play nearly identical to their arcade counterparts. That's no surprise, considering the fact that the most recent game in the collection, Millipede, displays only eight colors on screen at once and has perhaps 10 different sound effects in total. The text and score displays in Millepede are a bit squished, because the graphics have been resized to fit the GBA's screen dimensions, but the character and bug graphics look just fine. The text displays in Super Breakout and Lunar Lander don’t suffer from the same scrunching. One of the other Atari packs--the one with Centipede, Breakout, and Warlords--lets players change the screen ratio and orientation. It would have been nice to have the same options here.

The only major problem with this collection, aside from the fact that the games are rather old, is that it doesn't save high-score lists. Atari was the first company to add high-score lists and name entry to its games, so it's disappointing that this cartridge flies in the face of that landmark innovation.

All told, this compilation offers a reasonable way to play Millipede, Super Breakout, and Lunar Lander on the go. These games are old and they’re not pretty, but they’re all addictive and fun. Due to the absence of a high-score save feature, however, you'll want to think hard before pulling the trigger on a purchase. 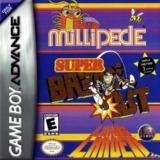 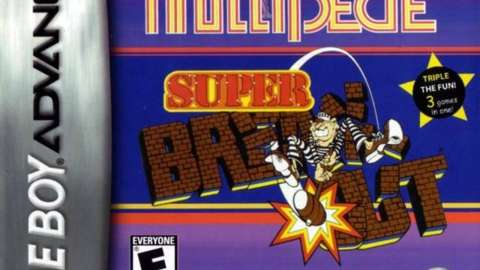 This is a combo game that features three classic titles: Millipede, Super Breakout, and Lunar Lander.