Mighty Bomb Jack is a repetitive, broken side-scroller that was somehow popular for a few months in 1987.

Mighty Bomb Jack is the video game equivalent of Vanilla Ice or pump sneakers. When the game was first released for the Nintendo Entertainment System in 1987, people took note of its jump-heavy design and charming graphics and snapped it up, assuming it would satisfy their craving for a Mario fix. Mighty Bomb Jack was the hottest thing going for a few months, until word got out that it was nothing like Super Mario Bros., and was, in fact, just a crummy side-scroller steeped in goofy charm. Bear in mind, this was in the days before rentals, video game magazines, message boards, and the Internet, so word of mouth was slower to propagate back then.

As with so many 2D action games from the 1980s, the main problem with Mighty Bomb Jack is that it has heart but lacks substance. The backgrounds put together with Mario-style blocks are colorful, and Jack himself is cute as a button clad in his red tights and superhero cape. Jack's enemies are cartoonish renditions of snakes and mummies, and the main bad guy is a demon named Belzebut. The soundtrack is full of circus tunes that genuinely make you want to bob your head. For about two minutes, the game will charm your socks off. Then, you'll notice how repetitive the backgrounds are, and that the developers didn't even bother to animate the flames that occupy so much space in the environment. Around the same time, you'll realize how shallow the action is. The whole game revolves around running and jumping your way through vertical and horizontal passages populated with platforms, treasure chests, and deadly lava beds while monsters randomly appear and chase after you. That's not a bad formula to build upon, but the level layouts are simplistic and every passage contains the same kinds of platforms, chests, and enemies. You can spend the power coins you collect to open up locked chests and to temporarily transform enemies into gold coins. Otherwise, Jack has no abilities apart from jumping.

You can adjust the height and distance of Jack's jumps depending on how long you hold the jump button down and what direction you press. Unfortunately, the controls aren't very precise, because you're just as likely to smash into the ceiling as you are to fall straight down. The game gets all of its difficulty from errant jumps brought about by the sketchy controls and the tendency for monsters to materialize in front of you midflight. As you can imagine, fighting with the controls and interacting with the same chests and enemies gets old fast. Ironically, there are plenty of secret rooms to discover, and figuring out the right route through all of the interconnected passages can take a while.

Adding insult to injury, the game actually punishes you for being too skilled at it. If you collect too many power coins or increase the timer above a certain point by collecting drink items, you'll be sent to a torture room filled with enemies that's almost guaranteed to rob you of one of your three lives. You can escape by jumping a certain number of times, but doing so is practically impossible due to the number of enemies combined with the busted jumping controls.

Based on its initial popularity, the NES version of Mighty Bomb Jack has probably earned its spot in the Wii's Virtual Console. But that historical significance is literally the only reason you should even consider wasting 500 Wii points ($5) to download Mighty Bomb Jack, since 20 years has done nothing to change how mind-numbing and broken the game is. 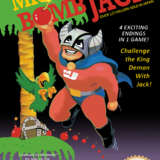