Tonight we're going to (assemble an adventuring) party like it's 1999.

You need to have the nostalgia gene to fully appreciate Might & Magic X: Legacy. I do, especially when it comes to role-playing games, so I did. But this is one of those "genre within a genre" retro affairs that self-consciously turns its back on modern conventions and embraces what us old folks were stuck with back in that antediluvian era known as the 1990s. Limbic Entertainment has created an old-fashioned RPG epic that might well have landed on some "best of" lists at the end of 1996. If you're the sort of person who fondly remembers a time before the Might & Magic name meant nothing but turn-based fantasy strategy, this game is for you.

Noting that M&MXL is not for everyone isn't necessarily an insult, either. On the contrary, it's clear from the very first moments of the game that the developers are trying to be as unfashionable as a pair of acid-washed jeans. Everything about this game can be traced back to first-person party-based RPGs from the 1990s, like the original M&M games, the Wizardry series, and even the Eye of the Beholder D&D line. The campaign setting of Ashan is all new for this franchise, however, having been ported over from Might & Magic Heroes right down to the goofy winged helmets. Oddly enough, this approach actually makes M&MXL more of a traditional fantasy game than its forebears, as the original M&M role-players blended spaceships in with their swords and sorcery. Still, the general objective seems to have been to create a new game that picks up right where this style of RPG left off about 15 years ago.

And that mission has been accomplished. Well, mostly. Several core components of the game are well done. There is a fair amount of choice when it comes to character creation, with four races and 12 classes (three per race) spread along the might and magic spectrums. Don't expect anything more revolutionary than the likes of dwarven defenders, human freemages, elven bladedancers, and orc barbarians in the beginning, but you have a lot of freedom to specialize once your party starts leveling up and you begin doling out points between attribute stats and skills. You can specialize in everything from maces and bows to a whopping seven schools of magic, allowing for the custom-crafting of almost any sort of heroic adventurer that you can dream up. The sheer amount of liberty even allows for some evolution during gameplay. I started off with an elven ranger who I thought would be good in ranged combat, but I eventually realized that she worked better as a second spellcaster who specialized in healing. A few levels later, and I had an impressive cleric wannabe curing poison and dishing out restoration incantations when she wasn't offing foes with her bow and arrow.

It's clear from the very first moments of the game that the developers are trying to be as unfashionable as a pair of acid-washed jeans.

Managing your party is more involved than in most RPGs, so you can't just storm off looking for adventure. First, you need to take care of business by buying food. Without it, you're not allowed to rest, which soon causes your party to grow tired and drop ability scores. You also need to rest to regain health and mana, because neither regenerates on its own over time. Not much of this is spelled out, and the tooltips offered up at the start of the game don't do much to explain the basics. All becomes clear if you're patient, though, or if you remember doing this stuff many years ago. Nevertheless, the game could use more hand-holding in the beginning.

Like most RPGs released when grunge was still a thing, M&MXL features a first-person camera and grid-based movement where you move one step at a time. This system works relatively smoothly. Yes, you're stuck with an odd perspective that forces you to view the world as if the party were crammed into a car and looking out through the windshield, and the entire four-person party has to trudge as one through dungeons and forests, like a tank bristling with battle-axes and magic wands. But you soon get used to navigating in such a restricted fashion.

Movement has even been improved from the days of yore. M&MXL features turn-based combat, so you can't gimmick the system. Back in the day, it was common to cheat through real-time battles with tricks like the Eye of the Beholder Two Step, where you would zip forward to hit a monster and then immediately retreat before it could hit you back. Here, you're locked into battle once an enemy closes and the fight begins. So instead of dipsy-doodling back and forth, you're stuck going toe-to-toe with the bad guys. This results in some grueling combat, since you have virtually no range of motion once melee combat has started and no ability at all to choose the better part of valor and run away.

Managing your party is more involved than in most RPGs, so you can't just storm off looking for adventure.

In some ways, the game goes too far. Not only does it take away the exploits common to first-person RPGs in the '90s, but it hammers away at you relentlessly (even at the lower "adventurer" setting). Combat is unforgiving right from the opening tutorial quest to clean spiders out of an underground lair. Monsters flank and surround you in almost every other fight, frequently spawning in out of nowhere to your rear. Just when you've got your hands full with that minotaur in your face, along come two more to hassle you from behind. Most monsters also have devastating special abilities. Almost every enemy has the ability to stun you, poison you, enfeeble you, petrify you, hit you with extra attacks, and more. Wolves and goblins can insta-kill party members if they get lucky. I don't recall an easy battle in the entire campaign. That sounds sort of fun and intense, but really, I could have done without titanic half-hour struggles to best the likes of two goblins, a couple of cavemen, and a pack of panthers.

M&MXL isn't impossibly hard, but the punishing difficulty can lead to tedium. You can (eventually) beat any monster, group of monsters, or even the game's collection of brutally tough bosses by thinking about what you're doing when it comes to strategizing and spellcasting. The extreme challenge is a natural fit for a revamped classic, but that doesn't make the occasional bitter pill of a battle easier to swallow. When actually playing the game, I was too busy cursing out the nagas or spiders gooning me from all sides to appreciate the retro character of the battle difficulty.

How dated M&MXL is in other areas is harder to appreciate. The story isn't particularly well developed. The opening preamble is about as exciting as listening to someone recite a tax return, and there isn't much of a tale told during the game itself. Your party consists of a bunch of heroes, oddly called "raiders," who are out to do good things for the human empire in a time of unrest. There isn't much role-playing to be had here; the game is a dry tactical affair where combat is the first order of the day, followed up by the odd puzzle.

Monster stock is limited. Areas and dungeons are populated by just a few specific types of creatures or human thugs, and the pace can drag because fighting the same fight over and over again. Loot isn't varied or particularly imaginative, either when it's dropped or when you check out what's available in shops. It gets better as you go, but there isn't a lot of memorable "gotta have it" gear. As a result, you can go for hours with few serious upgrades of weapons and armor. How items are doled out is also strange. Monsters don't tend to drop much when they're slain, but chests loaded with goodies and gold are strewn all over the wilderness like some kind of medieval take on geocaching.

The throwback production values are as traditional as the adventure itself, though these elements have not aged all that tastefully. Animations can be choppy, especially in forests, and slowdown is a common occurrence in the wilderness and when there are multiple lighting effects on the screen at the same time. Sound is also sparse, with what seems like a handful of weapon and monster effects. Hero battle boasts like the orc warrior's "I kill you!" are repeated constantly. Even worse, your heroes shout their cries of sadness about being knocked out or killed a few seconds before the blow is actually delivered, so you get advance warning when somebody is about to be taken down. This makes battles a teensy bit anticlimactic.

Might & Magic X: Legacy is a somewhat successful trip back in time to an era when RPGs were both simpler and more complicated than they are today, and a lot more demanding of players when it came to combat. If nostalgia drives you to visit this particular kingdom, you'll not likely regret the time spend there. If your good old days weren't brimming with games of this nature, it's more difficult to appreciate the take-no-prisoners challenge and overlook the limitations. 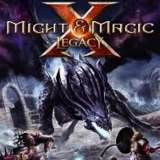 Veteran role player Brett Todd spent about 15 hours on might and another 15 hours on magic in the course of reviewing Might & Magic X: Legacy. 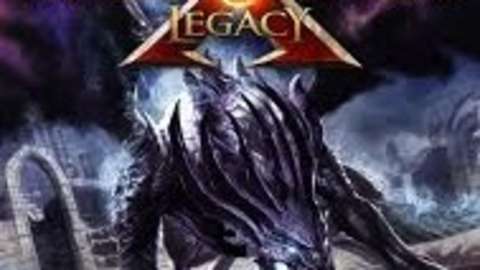 Might & Magic X Legacy has you play in a party of four adventurers entangled in intrigue and political machinations unfolding in and around Karthal.