Might & Magic Heroes VI: Shades of Darkness is a harsh challenge, but not often a fair one.

Might & Magic Heroes VI: Shades of Darkness is as addictive as it is annoying. This standalone expansion for the 2011 turn-based tactical role-playing game will lure you in with its compelling combat and gorgeous artwork, but push you away with its intense difficulty and bugs. Shades of Darkness clearly needed more time in development, both to smooth out some issues with the over-the-top challenges presented in the new campaigns, and to stomp out the bugs that make the game even tougher to play.

At the heart of this standalone expansion is a pair of new campaigns focusing on the darker side of the Might & Magic Heroes world. Events unfold in the fantasy realm of Ashan about a century after those in the original Might & Magic Heroes VI. In one, you take on the role of Raelag, a dark elf prince fighting to unite warring clans and ensure the survival of his underground-dwelling new Dungeon faction against the machinations of the Necromancers of Necropolis. In the other, you play Vein, a death knight working with the Necropolis faction. There's plenty of convoluted lore, which references black dragons, the goddess Malassa, some creeps known as the Faceless, and so forth, but you can (and perhaps should) safely skip the cutscenes and just skim the rather dense text without missing anything important. Very little of the campaigns' stories matters to what happens in battle, and the overenunciated voice acting is highly cartoonish, making the plot feel more like overzealous window dressing than a tale worth telling.

Nothing in the two campaigns is particularly noteworthy for series veterans. There is an assortment of new, predictable units with the Dungeon faction, along with new heroes and new artifacts to equip. The new stealth abilities are nifty, especially if you have a good stack of dark elf assassins in your army, as they can deliver devastating attacks at the start of battles due to their invisibility talent. But aside from stealth, nothing significantly alters gameplay. Both the campaign structure and map design are similar to what has come before.

One way in which Shades of Darkness excels is its reliance on the darker side of fantasy. You guide evil factions loaded with the likes of vampires, ghouls, assassins, and floating octopi, and mysterious visual touches on main maps and battle scenes make these entities come to eerie life. Even watching your Necromancer troops scream in triumph after battles is chilling. The mixture of these evildoers and their underground lands and the traditional brighter color palette of the above-ground Might & Magic world of Ashan is striking.

Varying difficulty is a significant source of frustration. Maps are loaded with encounters, giving you a lot to explore and kill. Most battles are easy to win in the early stages, which helps you sink your teeth into what Shades of Darkness has to offer. But it's all a trap. This early easy difficulty sets up an illusion that you're rolling along nicely, mopping up the bad guys while sustaining seemingly acceptable losses. But in reality, the later-map battles are so tough that you can't afford to lose anybody along the way. Even trivial- or low-rated foes tend to take out at least a few of your troops before their dirt naps. So if you take on a lot of encounters, your losses add up quickly.

There is little to no margin for error here. You need to find the right path to the victory objectives without making any mistakes. Take on too many foes, and you lose the war of attrition; take on too few, and you wind up not gaining enough experience and missing out on artifacts that have a huge impact on powering up your hero. Then there are the tight time restrictions. Many maps have one or more goals involving a task like reaching a certain spot, or destroying specific enemy locations, that need to be accomplished in a set number of turns. Take too much time to explore or experiment, and you instantly lose.

Such time constraints hamper your ability to recruit reinforcements and all but require you to repeat maps once or twice before you have a chance at victory. You frequently wind up backtracking and fighting the same battles, or even just replaying maps from the beginning. It's all too easy to get close to the end of a map and discover that (surprise!) you really couldn't afford the loss of those dozen assassins an hour or so ago after all, or that you simply don't have the number of turns needed to complete all the goals that the game demands.

Still, it's not all bad. You must ask yourself before entering almost any encounter if the end result will be worth it. Will the inevitable troop loss be justified by the experience points, nifty suit of armor, nice pile of gold, or other goodies you get to loot after the bloodshed? These considerations prevent you from simply plowing through every encounter on the map en route to eventual victory. They also give the campaigns some serious heft when it comes to both engrossing you and the sheer time it takes to complete them. Having so little room for screwing up raises the stakes, giving importance to every move you make. It's all quite grueling, but at times, it's a good kind of grueling.

Bugs are another problem. Initially, the new content couldn't even be accessed on the Steam content delivery service, and while the problem has been rectified, there are lingering issues with battle screens going black due to a conflict with machines that have dual video cards. Dealing with this problem means forcing a shutdown, which in turn might cause save files to go missing, forcing a complete replay of the map in progress.

Shades of Darkness is aimed at hardcore Might & Magic Heroes VI players who want a serious challenge. And in that respect, the game delivers. Unfortunately, this difficulty is more than a bit unfair, hitting you with too many surprises that force you to replay battles and huge sections of maps on a regular basis. You have to be too perfect, in too many battles, too often. The relentless punishment, plus the bugs, make the game tough to recommend to anyone but diehard fans of the series looking for the ultimate M&M Heroes challenge. 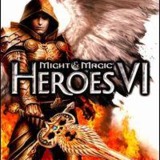