Judging from the colorful anime characters and soothing soundtrack, you might mistake Might & Magic: Clash of Heroes for a Japanese-style console role-playing game. But it's actually a unique hybrid game that offers an RPG-like Story mode complete with character progression, quests, and items--plus some light strategy elements--all wrapped around match-three-style puzzle gameplay similar to that of Puzzle Quest. So you get a very substantial Story mode, plus single-player quick battles and multi- or single-cart multiplayer. And while Clash of Heroes' puzzle mechanics aren't always elegant, the meaty Story mode and RPG-like progression make it a great all-around package for those with any interest in both puzzle games and RPGs.

Clash of Heroes takes several cues from the Heroes of Might and Magic strategy series for the PC--a classic set of hybrid strategy-RPG games that let you play as a hero character from one of several factions, each of which produced a different set of fabulous warriors and monsters of varying levels of power to join your hero's quest. On the off chance that you're a fan of the Heroes series, you'll be pleasantly surprised to see several references to it. For instance, various Heroes factions and critters, such as the mystical wizard's tower and the demonic inferno (and their assorted denizens) make an appearance here. And just like in the Heroes series, in this game, you play as a hero that gains experience levels, collects gold and resources, and hires more-powerful creatures from habitat structures as they become available.

However, the core of the game is its head-to-head, turn-based puzzle battles. Battles take place on two 8-by-6 grids, one on the upper DS screen and one on the lower screen, that are filled with military units of various colors. Your job is to use the few moves you have each turn to match identical units of the same color in specific patterns, such as horizontal lines, which builds a defensive wall between the screens. Walls shield you from attacks and have other properties depending on which hero you're playing (the nature-loving Sylvan heroes, for instance, have vine walls that grow bigger each turn). Matching three normal units vertically will charge them and set them to attack after they charge up for several rounds (different units have differing charge times with different damage levels and other properties). Once the timer runs down, they'll rush forward across DS screens and attack anything across from them, including enemy walls, enemy units, specific targets of opportunity located in some of the puzzle-like challenge missions, and, in many cases, enemy heroes. These units disappear forever, but they replenish your offscreen reserves of units, which you can reinforce by spending a move to call in more troops. You can also set yourself up for various attack bonuses by activating more than one group of the same color in the same turn, which is known as a link bonus, or by stacking two identical, activated units vertically on top of each other, which provides the even more powerful fusion bonus.

Each hero can equip up to three different low-level units and has two additional slots in his army for more-powerful creatures, including elite units, which take up two vertical spaces, and champion units, which take up a 2-by-2 grid. Elite units require two identical low-level units of the same color lined up vertically beneath them to activate them for battle, while champion units require a 2-by-2 grid of four identical low-level units lined up, though once they're charged, some elite and champion units can turn the tide of battle, both because they have powerful abilities such as healing your hero while charging, ignoring walls, or obliterating idle enemy units, and also because they tend to be tougher than nonactivated units and can often soak up more damage than a wall. And aside from standard, elite, and champion units, your hero has a single, unique spell ability that is intended to be a game-changer (such as detonating all your existing walls into devastating fireball attacks). In addition, you may equip your choice of one artifact item (the actual list of available artifacts depends on your faction), which will provide a global bonus to your hero's units, walls, or health…or some other miscellaneous advantage. Choosing your unit loadout and artifacts (and in Story mode, choosing which elite and champion units to purchase with your limited funds), along with choosing your next move in each puzzle battle, add some strategic depth as well.

Starting to sound a little complicated? It takes some time to get used to how things work, though it's rewarding once you wrap your head around mechanics like walls, fusion attacks, link attacks, and spells. However, if you're a longtime puzzle game fan, you might find the gameplay to be a little clunky due to some minor issues. This is because your moves on the puzzle board are limited to picking up and dragging the bottom-most unit on any column, deleting a single unit anywhere on the board, or casting your hero's spell (which needs to be charged up by dealing or sustaining a sufficient amount of damage). There's also an artifact that one faction possesses that lets you pick up and move walls anywhere on the board, but that's it. Otherwise, there's no way to manipulate your units horizontally, and although you can earn additional moves each turn by pulling off a combination maneuver that ends up either forming a wall or charging units, sometimes you'll begin a battle with a bad layout with no combinations available and cumbersome units taking up too much space. In fact, most of the champion units in the game have such long charge times that their bulky 2-by-2 size makes them much more trouble than they're worth, since they'll often get killed off before you can fully charge them. Getting a bad layout can also kill your chances of winning Story mode's various boss battles, which throw creatively placed challenges or moving targets at you with very few turns to react. Still, with the exception of the trial-and-error nature of some of Story mode's boss battles, these problems aren't showstoppers--the game's complex battle system is otherwise very satisfying once you figure it out.

What's even more satisfying is Clash of Heroes' Story mode, a well-written, colorful adventure that resembles the gameplay of the classic 16-bit console RPGs as you move your characters along an overland map to the tune of gentle symphonic music. In Story mode, you follow the adventures of five different plucky young heroes as they uncover a sinister plan to overrun the world with demons. The plot isn't necessarily original, but it's written well enough to make you care about these brave young warriors and want to see their motivations through to the end. An even greater incentive is the sense of progression as you gain experience levels for both your heroes and their armies, pick up new artifacts, and eventually end up crushing enemies that once overwhelmed you. In some cases, you're all but required to repeatedly fight random encounter battles to grind your armies up to a higher experience level, but otherwise, Story mode has a very good pace that lets you either rush through to the end or take your time--upward of 20 to 30 hours or more--to gain your levels and perform challenging side quests and puzzle missions that are always rewarding.

Aside from Story mode, Clash of Heroes offers a Quick Battle mode and multiplayer, which can be played with all five Story mode heroes, as well as five additional companion characters that you unlock in Story mode. In both Quick Battle and multiplayer, you start with your hero at the maximum level of 10 and with your units at the maximum level of 5. These matches are enjoyable enough, but they don't offer the incentive of continued progression that Story mode does--being victorious in a quick battle or in multiplayer doesn't earn you any kind of character progression or achievements. And as it turns out, not all of Clash of Heroes' factions are created equal--the wizard tower faction is noticeably more powerful than any other in the game thanks to its relatively quick-charging elite units and devastating spells, while the knight's castle faction ends up being the slowest and weakest of the bunch.

All things considered, Might & Magic: Clash of Heroes has a lot going for it, including intriguing hybrid mechanics, callbacks to a classic strategy series, enjoyable puzzle battles, and a well-written story that could have come out of a vintage 16-bit RPG. Since the puzzle gameplay is an integral part of the battle system, and since the role-playing elements are the star of the game's main attraction--Story mode--you'll need to be a fan of both puzzle games and RPGs to get the most out of Clash of Heroes. However, if you are a fan of both game genres, you'll find a very good puzzle game and a great console RPG experience here. 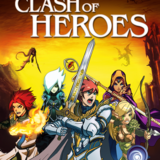