Although its driving mechanics aren't terribly sophisticated, it can be a lot of fun because it affords you that very freedom that all driving games should but rarely deliver.

Driving games remain a mostly unexplored frontier. Flight simulators give you the whole countryside, spaceflight simulators give you the galaxy, but most driving games give you about six tracks. With few exceptions, in driving games you never really get the sense of freedom that the motor vehicle, in that ideal world as portrayed in car commercials, is supposed to provide. That's why Midtown Madness, because of its ambitious scope, stands poised to redefine the genre's standards: The game doesn't contain traditional tracks, so much as the entire city of Chicago mapped out by the block, complete with all its famous landmarks from the Sears Tower to Wrigley Field. The city lives and breathes rather like the real thing, with variable traffic and weather conditions, pedestrians, traffic lights, cops, and freeways. And you get to drive wherever you want within the windy city, and however you want. Although its driving mechanics aren't terribly sophisticated, it can be a lot of fun because it affords you that very freedom that all driving games should but rarely deliver.

You get to drive a wide assortment of real-world vehicles, from the frightfully popular Volkswagen New Beetle to the luxurious 1999 Cadillac El Dorado. You can also unlock a bevy of unusual machines, from a city bus to a souped-up Ford Mustang police car. All these cars handle and sound different from one another (you even hear warning beeps when the bus goes in reverse), and although the game plays best from a third-person view, you can switch to a unique first-person dashboard view, complete with steering wheel and tachometer but no rearview mirrors. There's also a great wide-screen view that increases your field of vision as well as your frame rate, and there's a real-time map of the city marked with all its landmarks. Though you can drive around ten different vehicles total, it's too bad there weren't even more real cars, like the hundreds available in the popular PlayStation driving game Gran Turismo. It's also a bit of a disappointment that all the cars you'll come across on the city streets are generic hatchbacks and sedans and not the real thing like what you're driving.

Midtown Madness requires some pretty powerful hardware in order to look its best, and even at its best it doesn't look as good as it might have and often suffers from choppy frame rates. With all its options turned on, the vehicles look nice and shiny although at times a little too flat. They get damaged when they run into things, although this effect isn't entirely convincing either. Other details really stand out, like the bright traffic lights and the different weather and time conditions that manage to evoke a particular beauty about the city through their sheer variety. But while it's great to see Chicago's landmarks and its smaller streets modeled so carefully, it's too bad that most of the storefronts in the game are generic and often repeated, even on the same block. Thus Midtown Madness approaches, but doesn't actually reach, that meticulous level of realism and detail that driving games must necessarily strive for.

Nevertheless, it's fun to be able to drive like a maniac and beat up a Beetle while racing the city cops. If you feel there's some scathingly detrimental social undercurrent to this game's affording you the freedom to drive however you like, then by all means keep off the road. But Midtown Madness doesn't present itself as some sort of perfectly realistic simulation: Pedestrians deftly dive out of the way of traffic, cars that are struck and sent airborne safely return to their routine, and mailboxes and parking meters that are uprooted eventually regenerate in their rightful places. Midtown Madness lets you safely run amok, because you know you can't in real life.

There's a lot of running amok to be done. The cruise mode just lets you drive wherever you like without restriction, but a number of other modes, including checkpoint races, larger-scale circuit races, timed races, and even a multiplayer-only cops and robbers game add a lot of value as you try to beat your rivals, the clock, or both. Your computer-controlled rivals drive aggressively and seek out shortcuts, while you yourself must choose to either adhere to the rules of the road or take some serious risks in reaching your destination before the other cars do. Even in these more straightforward racing modes, Midtown Madness lets you drive however you want. Add to that a fairly realistic physics model, good graphics and sound, and a lot of variety, and it's easy to see why Midtown Madness is so much fun. You'll find yourself wishing it was even more detailed, but all the same, you'll wish all other driving games paid as much attention to detail as this one. 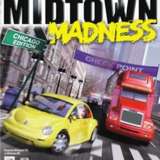