The Midtown Madness series started out on the PC back in 1999. The game has always offered checkpoint-style races in huge, open cities carefully modeled after real-world locations. The first two games were developed by Angel Studios, the team that went on to develop Midnight Club for Rockstar. This new, third entry in the Midtown Madness series is exclusive to the Xbox and has been developed by DICE, the company behind another successful Xbox driving game, Rallisport Challenge. While the developers and the platform may have changed, Midtown Madness 3 still delivers the same style of street racing you'd expect to see, with the added bonus of some fantastic online thrills.

Midtown Madness 3 gives you two complete cities to work with. Though you can pick from either city at any time, Paris is laid out in an easier-to-navigate fashion. The other city, Washington DC, makes use of overpasses and trickier-to-navigate roads, so starting with Paris and working your way up to DC is recommended. Each city offers the same collection of single-player modes. The main mode is called "work undercover," and it serves as a weird sort of story mode for the game. Essentially, you're taking on a bunch of random car-related jobs as you attempt to get to the bottom of some silly crime. Each job puts you in different vehicles, so you'll be driving police cars, pizza-delivery cars, rental cars, money-transporting armored cars, and so on. This basically wraps a loose story around a series of checkpoint races, though the story isn't very interesting and is stacked high with lots of poor voice work. The other one-player modes are a little more in line with the Midtown Madness legacy, offering the ability to cruise the streets aimlessly, to participate in checkpoint races against the AI, or to engage in blitz races, which are checkpoint races against the clock. All styles of races present opportunities to unlock either more races or more vehicles for use in the offline modes. The racer AI and rigid nature of the checkpoint-style races grow tiresome fairly quickly, making the single-player game less than exciting, especially when it forces you to race in, say, an aggravatingly slow armored car.

The physics model and control found in Midtown Madness 3 seem to be designed to be about as far from a racing simulation as you can get. Cars whip around corners with little problem, you rarely have to use your brakes, and generally, the game is designed for fun rather than for accuracy. Once you get hold of the game's faster cars, the driving really is quite fun, but the slower cars are, as you might expect, pretty boring. The physics and collision detection are a little crazy. While the streets are filled with traffic, cars fly out of the way when your car comes into contact with them. It's as if the other cars were made of cardboard. There are a lot of breakable items on the sides of the streets, such as light posts, barricades, and so on. Many streets are lined with trees, but you can't actually knock over trees. Strangely enough, your car just sails through trees, but doing so actually causes your car to pop up in the air a little bit. Given that you can drive through and smash up the rest of the scenery with only slight repercussions, the way the game handles trees is pretty weird.

While the game has support for both two-player split-screen and eight-player system-link games, the obvious standout is the game's Xbox Live support, which allows up to eight players to go at it over the Internet. The game's multiplayer modes are more configurable and much more exciting than the solo component. Capture the gold is a CTF-style mode that puts gold in a random spot on the map. You must collect the gold and deliver it to a drop-off point to score, but you'll lose the gold if another player wrecks into you. Hunter starts one player off in a police car. The cop must ram the other players, and when a player is hit by the cop car, that player turns into a hunter. The winner is the last driver to get smashed by The Man. Tag is, essentially, a game of hot potato. You pass the moniker of "it" around as a timer ticks down. Whoever is it when the timer expires is eliminated, and play continues until only one driver is left. Stayaway is the opposite of tag, where you want to be it for as long as you can by avoiding contact with other drivers. The "it" car is slowed down, making it difficult to completely escape the opposing vehicles. Finally, the checkpoint and cruise modes from single-player also move over.

Midtown Madness 3's online mode has been designed with ease of use in mind. You can join a server midgame, and when cruising or between games, it's easy to quickly drop out and select another car, and you don't have to unlock cars in single-player to enjoy racing the higher-end models online. These things make the game more accessible than its nearest competition, Midnight Club II. The game definitely could have used some online statistic tracking to create a more meaningful sense of competition, but the game works very well online over standard consumer-grade broadband, and, more importantly, Midtown Madness 3 is just plain fun to play against other human competitors.

Graphically, Midtown Madness does a decent job of presenting city streets and auto racing. The game moves at a smooth frame rate and has a good amount of detail. However, the game really doesn't give you a very good sense of speed, and 100mph usually feels more like 45-60mph. The environments are large, and many monuments and other recognizable locations are included, but the average buildings and storefronts that fill the streets don't look so great. Overall, the game comes together to look good, but not particularly great. The game also has support for 480p.

The game's sound is your standard collection of racing noises and tire screeching, and all of that is done well. The voices used throughout the game, however, are quite terrible, and the music isn't much better. The game has custom-soundtrack support, and it's highly recommended that you use it.

Make no mistake, Midtown Madness 3 is an online game. The single-player modes are simply run-of-the-mill checkpoint races that don't really add anything meaningful to the overall package. The online play really saves it, though, as the nice collection of modes and the ease with which you can jump into games or change cars as needed definitely put the focus on fun. Players looking for a terrific online racing game won't be disappointed. 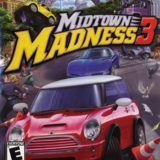 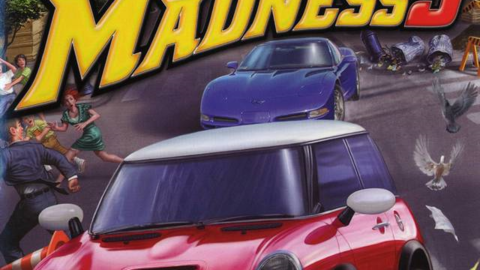