If you want to play a very fun racing game, then Midtown Madness 2 is for you.

There are few sure things in life, but one of them is that if Microsoft puts out a racing game with "Madness" in the title, you might as well grab it as soon as it hits store shelves. Midtown Madness 2 is no exception to this rule. It doesn't matter whether you're a hard-core simulation fan or you simply crave speed, destruction, and mayhem in your games - if you want to play a very fun racing game, then Midtown Madness 2 is for you.

But that's not to say that Midtown Madness 2 is ideal. In fact, it seems as though it could have used a couple more weeks in testing. On several occasions the game completely locked up on a fairly standard system (Celeron 450MHz, 256MB RAM, TNT2 video card with the latest drivers), and only through uninstalling and reinstalling did the problem finally seem to go away. As in some other racing games, the brakes don't truly function as real-life brakes when both pedals are configured to use the y-axis: Slamming on the pedal doesn't lock the wheels but merely decelerates your car more quickly. An attempt to correct this by configuring the pedals to use two axes revealed a bug - the brakes worked in reverse, forcing you to keep the pedal down for no brakes and releasing it to stop. Your only true braking option is the hand brake, which tends to cause unpredictable slides when all you really want to do is slow down in a hurry. Also, at the beginning of one race, my car was positioned facing in the opposite direction of the other cars, and stepping on the gas sent me hurtling backward along with them even though I was in first gear. Fortunately, none of these problems were persistent or detrimental to how enjoyable the game turns out to be.

You can actually work your way around most of these issues, and in fact you might never experience a game crash yourself. But there's no getting past the game's rather pathetic engine noises. When you see a '68 Mustang Fastback tearing through downtown San Francisco, you want to hear a mighty rumbling sound that'll make bystanders think the big earthquake's finally happening. Instead, the cars in Midtown Madness 2 give off a little purr that barely changes in tone even when you're redlining the tachometer. Even in an arcade-style racing game such as this, it's good to be able to hear when you should change gears, rather than constantly have to check the tachometer.

The occasional bugs and the weak sound effects are the only low points in Midtown Madness 2, because otherwise, the game is a blast. Midtown Madness players who've grown used to screaming through Chicago will be happy to find two new venues featured in the sequel: San Francisco and London. As in the original game, both cities have been meticulously modeled to include many notable landscapes. In San Fran, you'll see Coit Tower, the Palace of Fine Arts, and of course the Golden Gate Bridge; in London, you can tool around Trafalgar Square and even ram through the gates of Buckingham Palace and do a few donuts on the well-manicured lawn.

You can drive in 20 different rides that range from standards like Mustangs, an El Dorado, and several types of Volkswagens (including the Dune and the new Beetle RSi) to big rigs, double-decker buses, and even a Humvee-wannabee called the "light tactical vehicle." But don't expect to hop in that Dune, Aston Martin, or Panoz GTR-1 as soon as you load the game. Nearly half the cars are locked when you first begin play. Fortunately, unlocking the first few isn't too tough when you play on the amateur difficulty setting - for instance, to get the Audi TT, you just have to finish in the top three of half of the San Francisco checkpoint races. Still, it can be frustrating to have to unlock all those hidden cars.

All the race modes from the first game - checkpoint, blitz, circuit, and cruise - are still in the sequel, and each is enjoyable in its own right. It's impressive how much time you can spend simply in the free-for-all cruise mode, either driving in a law-abiding fashion or creating widespread panic as you plow through any cars whose drivers are inconsiderate enough to get in your way. You can't actually hit pedestrians, but watching them dive to safety or hug a wall as you blow by them is a real hoot. Another nice feature is the amusing prerace and postrace announcer commentary.

The new race mode is called crash course, which seems like it might be designed to teach you how to be a stunt driver in San Francisco, or else a cabbie in old London town. Divided into groups of three short events followed a "midterm" exam, the crash courses also give you some good experience at mastering the driving skills needed to win races against computer and human opponents. Unfortunately, they're also tied in to the unlocking of two cars. The mission-oriented crash courses can be rather exciting, but not necessarily more than the crash-bang thrills of the regular races.

As you run into things, you'll notice there's a damage meter that displays how badly you're smashing up your car, though it's not visible with the first-person dashboard display turned on. But you shouldn't worry too much because it takes multiple high-speed collisions just to see smoke start pouring from the hood. Although it's possible to wreck your car so much that it can barely wobble down the road, it takes a Herculean effort to achieve this level of destruction. On the other hand, you'll appreciate the visual effects of the damage - dented doors, crumpled fenders, bent rims, and more. There's only one thing missing from the equation: instant replay. In a game that puts a premium on speed, wrecks, automotive aerobatics, and general mayhem, an instant replay or videotape feature should have been a top priority. The lack of one in Midtown Madness 2 is disappointing, especially since the one in Motocross Madness 2 worked so well.

You can count on hours of fun in the game's single-player mode, but the multiplayer mode makes the game even better. The action seems fairly smooth over the MSN Gaming Zone, but as with most driving games, things can get frustrating when players with high pings get into a race. Most fans seem to favor variations on the cops and robbers mode, in which teams or single players race to snatch a gold bar and return it to the bank (cop) or a hideout (robber), but you can also run in all the modes available in the single-player game.

Although its minimum system requirements are fairly low, you'll probably need a fast Pentium III and a cutting-edge 3D video card to play Midtown Madness 2 in higher resolutions with all the graphical bells and whistles turned on. But the action itself is so fast and brutal that you likely won't mind one bit that you have to give up some visual extras in order to get a smooth frame rate. The game might even make you consider making that hardware upgrade you've been putting off - and any game that does that is always worth checking out. 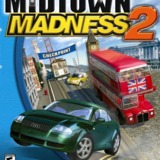 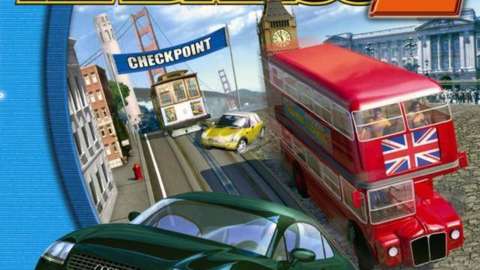 If you want to play a very fun racing game, then Midtown Madness 2 is for you.