Midnight Fight Express is a modern beat-'em-up with extensive motion-captured animations that bring its frenetic combat to life with wince-inducing satisfaction.

Two of the characters in Midnight Fight Express are called Kyler Turden, a riff on the antagonist of Fight Club, and Chef Favreau, a nod to Iron Man and Chef director Jon Favreau. Its first act opens with a quote directly from the 1865 novel, Alice's Adventures in Wonderland. If you're wondering why a game that's supposedly influenced by '80s action cinema includes references to things that are definitely not that, you're not alone. This does provide a good barometer for the game's tone, though--which is all over the place and never takes itself too seriously.

Midnight Fight Express's period-specific action roots are only really reflected in some fantastically violent gameplay, pitting a one-man army against a neverending slew of bozos, cronies, and crooked cops. There's very little to the game beyond its combat; Midnight Fight Express is essentially a modern beat-'em-up, ditching the usual side-scrolling 2D sprites for 3D fisticuffs and an isometric perspective. Its action is fast-paced and kinetic, only letting up when the story gets in the way, and the sheer breadth of motion-captured animations is both impressive and surprising for a game developed by a studio as small as Humble Games.

In fact, Midnight Fight Express was mostly created by one man: Jacob Dzwinel. Yet it's his collaboration with renowned stuntmen Eric Jacobus (God of War, The Last of Us: Part II) and Fernando Jay Huerto (Destiny 2) that really brings the game's wince-inducing combat to life.

At its core, Midnight Fight Express functions similarly to the Batman: Arkham games. You're often surrounded by combatants, but your fighting prowess allows you to quickly dash from one enemy to the next with rapid combinations and counter-attack when an attacker lunges at you. You can dodge to avoid those wielding baseball bats, knives, and the like, and there's a fantastic sense of weight behind each bone-breaking strike that's inherently gratifying. Guns, in particular, are punchy and appropriately lethal, and there's a responsiveness to the controls that makes clearing rooms of enraged goons particularly satisfying. The only downside is that both finishers and your revolver are mapped to the same button, resulting in a few too many instances where you'll waste a rare shot when you wanted to finish an enemy off with a quick flurry.

It doesn't take long for your repertoire of deadly moves to expand as you climb each branch of the skill tree, and it's here where Midnight Fight Express starts setting itself apart from those Batman-inspired beginnings. Your basic attacks begin to evolve, incorporating ground pounds, brutal uppercuts, and power slides that sweep enemies off their feet. Later in the game, you gain access to a rope that lets you drag unfortunate foes toward you or hurl them around in a circle to knock over their buddies. There's also a single-shot revolver that utilizes unconventional ammo types, including electrified bullets and homing mines.

Eventually, you can also transition from combos into lethal grabs and finishing moves. Once you've grabbed hold of an enemy, you have a number of options available to you, from manhandling them to the ground, where they're greeted by a hail of fists, to hoisting them up above your shoulders and hurling them into the nearest wall. Finishers, on the other hand, are brutal--and sometimes funny--exclamation points at the end of a combo, allowing you to snuff out an enemy's tenure with furious aplomb.

These finishers incorporate Muay Thai, Taekwondo, Hapkido, and wrestling techniques, so there's already a basis for plenty of variation. Variety is the spice of combat, after all, at least according to Midnight Fight Express. There are hundreds of mo-capped moves integrated into the game, whether you're spiking an enemy's head into the ground with a German suplex, catching a head kick before responding with a quick nut shot, or pummeling someone with a barrage of elbow and knee strikes.

These moves aren't just limited to two characters standing opposite each other, either. There are dozens upon dozens of context-sensitive finishers, too. You'll see unique animations if an enemy is, say, standing up against a wall or laying face down on the floor. If they're next to a sink, you're liable to smash their face through the porcelain, or chuck them over a railing if they're foolish enough to fight you halfway up an oil rig. Weapon finishers are also prevalent, depending on which instrument of death you're wielding, and the same is true once you unlock the ability to counter armed opponents.

There are 100 weapons in the game, ranging from knives and tire irons to toilet plungers and myriad firearms. Guns give you the opportunity to dispatch a number of foes with relative ease, but you're only given a single magazine before the weapon runs dry. Melee weapons are the predominant tool of choice, with each environment presenting a sandbox for you to experiment in. You're incentivized to indulge your creativity by a scoring system that ranks your performance at the end of each level. This means delving into your own arsenal to diversify your killing blows, but also making use of the environment. This might include picking up and using various weapons, knocking enemies off their feet by kicking chairs and cardboard boxes into them, or lobbing an explosive that instantly turns anyone caught in the blast radius into giblets.

This scoring system, and the addition of various level-specific challenges and leaderboards, add to the game's replayability. There are 41 levels in total, which sounds like a lot, but they rarely ever run for longer than five minutes. They're diverse, too, encompassing sleazy nightclubs, high-rise buildings, subway tunnels, and a satirical game studio where you pummel devs with pillows and nerf guns. Occasionally, you'll hop on a jet ski or motorbike to break away from the norm, and some of the levels feel wildly different because of the spaces you're fighting in. Clashing with enemies on a construction site, where there's room to dodge and a chance to throw people off a half-completed building, isn't the same as fighting within the cramped confines of an elevator.

Sometimes there are other factors, too. One of the early levels sees you moving through a train car while battling a conveyor belt of enemies within its tight quarters. Meanwhile, a helicopter is following outside and firing through the windows. You end up competing for the safe space between each window, but you can also use the sniper fire to your advantage, since the enemies on the train are just as susceptible to it as you are. The whole game is also complemented by a thumping soundtrack from artist Noisecream that perfectly matches the combat's thrilling rhythm.

On the flip side, the story is little more than a hindrance, in part because of its loquaciousness. The whole game takes place across a single night as you fight to prevent a citywide criminal takeover. While the protagonist, Babyface, is a blank slate with no dialogue, you're joined by a rather talkative drone. There's no voice acting in Midnight Fight Express, so you're often interrupted by lines of text that put a sudden halt to the action's rapid flow. Much of the dialogue also feels gratuitous, frequently lending background information to enemy types that add nothing of substance. There's some fun satire sprinkled throughout, but the story's attempts at earnestness fall flat because the protagonist is such a non-entity, so it's tempting to skip past any dialogue and get back to the action.

There's little to Midnight Fight Express beyond its blood-spattered combat, but its skirmishes offer so much depth, variety, and satisfaction that it doesn't necessarily need much more. Repetition does begin to creep in as you approach the credits, yet the multitude of mo-capped animations ensures that you're still seeing new ways to batter enemies unconscious five hours in, and speaks to the excellence a developer can achieve when motion capture is utilized so extensively. It faces some stiff competition to stand out, with the likes of Sifu and TMNT: Shredder's Revenge offering different takes on the genre, but it's easy to recommend Midnight Fight Express to anyone craving an accomplished brawler. 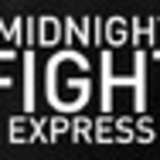 Richard finished Midnight Fight Express in just under five hours before going back to complete challenges and improve on his high scores. Review code was provided by the publisher.