Midnight Club is fast, beautiful, and way too hard.

Midnight Club Los Angeles has a lot going for it: excellent graphics; fast, intense racing that takes place day or night; and numerous online modes that support up to 16 racers. Unfortunately, it has a few rather significant problems that hold it back, including a small roster of vehicles and gameplay that, while fun, doesn't break any new ground. But most of all, it is Midnight Club's excessive difficulty that makes it a very good racing game rather than a great one.

There's a bit of a story, but it's the bare minimum to get you in a car to race around the streets of LA. And it is quite a version of LA. The game has a day/night cycle so you're not stuck racing at one time of day the whole time. You won't just race in sunshine, either. Some days are cloudy, and every once in awhile, the clouds unleash torrents of rain. Day or night, rain or shine, the city looks fantastic. The frame rate is steady, the action is fast, and the game's re-creation of LA is absolutely gorgeous. This slightly scaled-down City of Angels covers everything, including the beaches of Santa Monica, the Hollywood hills, and downtown. What's really neat about the city here is not only how many recognizable landmarks there are, such as the 3rd Street Promenade and LA Convention Center, but also the branded buildings, such as 7-11, Pizza Hut, Holiday Inn, and even billboards for iPods. There's certainly such a thing as too much advertising, but it's not overdone here (not every gas station is a 7-11, for example), and having these real-world businesses in the game world helps immerse you in the experience.

As with most street racing games, you drive around the city looking for people to race. When you find someone, you flash your lights, and in most cases, race to the starting line. There are time trials, checkpoint races around the city, freeway races, and races from point A to point B--pretty standard stuff for the genre. You'll also have missions where you must render payback by damaging target vehicles and deliver cars across town unscathed in an extremely short amount of time. There is a police presence, which can and will chase you down if it sees you're up to no good. Chases aren't as intense as in the Need for Speed games, but it's immensely entertaining to pull over and then watch yourself on the police car's dash-cam as you peel out when the cop approaches your vehicle.

When you finish a race, you're awarded money and respect based on your position. Respect unlocks new races, as well as new licensed cars (plus motorcycles), visual customization options, and performance upgrades. The slow way in which new cars are unlocked is most likely because of how few cars and bikes are (about 44) included. But regardless of the reason, it takes a lot of winning to gain new items, which can be frustrating when you've got money to spend and a car in desperate need of improvement.

Frustration is something you'll become accustomed to as you play Midnight Club LA. This is mostly due to the game's uneven and excessive difficulty. Other than the occasional race that lets you choose ahead of time, there are no difficulty settings. There are color-coded races that purport to be easy, medium, or hard, but quite often, the "easy" races are just as challenging as the hard ones. This "one size fits all" difficulty wouldn't have been a problem if the game were balanced, but it's not. CPU racers seem impervious to the perils of oncoming traffic. They rarely make significant contact with other cars, weaving back and forth across lanes like George Costanza playing Frogger. You, on the other hand, won't be as lucky. Even minor scrapes with cars, walls, and fences can send your car spinning and leave you facing the wrong way when you come to a stop. Parked cars are particularly hazardous because they don't have their lights on and are extremely difficult to see. Because of the amazing skill level of the CPU, even one minor error on your part can--and typically will--cost you the race. This means that you'll end up doing a lot of grinding (finding races that aren't insanely tough and repeatedly doing them over) to raise your respect level. It's tedious and doesn't make for a great time.

There are other issues that prevent Midnight Club from achieving its potential. The Google Earth-style map looks really cool as it seamlessly zooms from street level to the sky, but it's not great at showing you where to go. This is a problem because it's a map. The angle at which you view the city streets isn't very user-friendly when zoomed in, many streets aren't marked, you can't rotate it, and while you can set a waypoint marker, it won't show you the best route to take. This is a huge problem when you're racing from one spot to another without checkpoints--you must constantly pause the game and consult the map to make sure you're taking the right streets. This problem is even worse in the ridiculously punishing car-delivery minigames. Not only do you need to keep the pedal to the medal the whole time, but you have to avoid damaging the car all while pausing the game and checking the map every few blocks. Even when there are checkpoints, there is no guarantee you won't get lost. Some of these large pillars of smoke are poorly placed, and the smoke actually obscures what's behind it, making it possible to zoom right by a turn. When this happens, you might as well quit out of the race to start over because you don't get the same rubber-band assistance as the AI and probably won't recover.

If you can look past Midnight Club's many frustrating aspects (unlockable special abilities that do things like slow down time and clear cars out of your path help alleviate some, but not all, of the problems), there's a very solid racer to be found. When the difficulty is just right (it happens occasionally), and you take advantage of the simple-yet-effective drafting mechanic, races are exciting and finishes are tight. There's also a lot of enjoyment in the game's multiplayer component, which supports up to 16 racers via system link, as well as online. You can create your own races, challenge folks who happen to be driving around to standard races, or play one of the game's unique modes, such as Capture the Flag, Team Capture the Flag, Keepaway (get a flag then keep it away from everyone), Stockpile (whoever returns the most flags to his base wins), and more. Because it's a level playing field and you don't have to deal with the AI, multiplayer is where Midnight Club is at its best. Going online also gives you the opportunity to show off your ride to the community where others can rate your car's looks and even purchase it.

Midnight Club Los Angeles is exciting, beautiful, and great when played online. It's a shame that its difficulty is so uneven, because this issue and other problems take your attention away from what is an otherwise very good racing game. 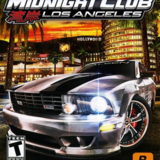