While there are definitely a few bumps in the road, Midnight Club II is a fine introduction to auto racing for Microsoft's Xbox Live service.

While the Xbox racing game market is becoming more and more diverse all the time, there's been one thing missing all along: online play. While THQ's MotoGP series was technically the first Xbox racing game to take the plunge, not everyone is willing to accept the hard-to-master nature of a motorcycle simulation. So, for the rest of us, Rockstar has put together its underground street racing game, Midnight Club II. Besides being a noticeable improvement on April's PlayStation 2 release, the game is a solid open-city racing game in its own right. Yet though the game has its strengths, some of its features didn't pan out quite as well as they could have. Still, Midnight Club II is good for those looking for some arcade-style racing action online.

Like the previous game, which was a PlayStation 2 launch title, Midnight Club II is about giving the player access to a gigantic citylike environment, complete with back alleys, monuments, and plenty of intricate shortcuts. The game's main mode is its career mode. At first, you're set loose in the city in search of adventure. This adventure comes in the form of hookmen, who are racers that patrol certain sections of the city. You challenge these racers by rolling up behind them and hitting your high beams. You then have to stay on their tail until you've proven yourself worthy. Once you've done so, you're thrown into one checkpoint race after another, challenging various hookmen and winning their cars as you defeat them. You start out on the streets of Los Angeles, but you'll eventually move on to Paris and Tokyo. The large cities are extremely cruise-worthy, and it's obvious that a lot of work went into putting the environments together, but you'll want to cruise in the game's arcade mode, as you're almost constantly harassed by annoying radio chatter when cruising around in the game's career mode.

Thankfully, the rest of the game's modes are a little quieter, though you can only access cars, races, and cities that you've opened up in the career mode. Arcade mode lets you cruise aimlessly, race a number of laps on a variety of predetermined circuits, replay any of the checkpoint races you've completed in the career mode, and enter four-player battle races, which let you play in either a standard sort of capture the flag game or a bomb-oriented variant called detonate, where players race to pick up a detonator and drive it to a scoring spot on the map to earn points. The game also has a race editor mode that allows you to place your own checkpoints and configure your own races. These custom races can then be saved and taken online. This is a cool addition, but it would have been cooler if you had been able to truly place your checkpoints anywhere on the map. Instead, you're limited to specific points.

The game's Xbox Live support features a good number of options, but it's a little sparse in spots. Just about anything you can do in the game's arcade mode is available here, though instead of being limited to playing against the game's AI or a second player, you can play against a total of seven other human opponents. The increased number of cars definitely makes modes like capture the flag and detonate much more meaningful. The game also has a number of power-ups that come into play here, such as the ability to inflict reverse steering, slippery handling, and other nasty effects on your opponents. In optimal conditions, the online play is just as smooth as its offline counterpart, but you have to keep an eye on the ping of the servers you're connecting to, as the game noticeably lags at lesser speeds. The front-end options that tie the online game together are a little lacking. The Xbox version adds a much-needed ranking system, which was missing from the PlayStation 2 release, but some sort of wagering system would have helped up the stakes in certain races. The game also locks your car choices once a race or series of races has begun online, which means you'll have to quit and find a new game just to change cars.

Much like in the previous game, the gameplay in Midnight Club II is fast and loose, though a handful of new tricks have been added. When you first start the career mode, you'll be driving a standard car, but eventually you'll unlock various abilities that help you race and maneuver more effectively. You'll be able to control your car in midair, burn out to gain speed off the line, earn nitrous boosts, earn extra turbo boosts by filling a drafting turbo meter, and pop up onto two wheels at will (which can come in handy for squeezing through tight spaces, but is often more trouble than its worth). The car handling in the game isn't very slippery, and at times the game's skids have an almost mechanical look to them. A quick tap of the hand brake lets you whip around corners extremely easily, and you'll never have to deal with abstract simulation concepts like oversteer or understeer. For the most part, you'll just be keeping the gas pedal mashed and braking occasionally to make some of the sharper turns. The physics in the game are pretty crazy, though. The cars never really feel like they have any weight to them. Sometimes taking a turn too fast will cause your car to roll, and launching off certain ramps will send you through the air for what seems like a mile. In the end, the game feels more like the shortcut-filled insanity of Midway's San Francisco Rush than a game about the exclusive world of underground street racing.

The open-ended nature of Midnight Club II can be both a blessing and a curse. On one hand, it's impressive to have such a large chunk of road available to you at any given time, and the checkpoints are set up in such a way that there are always at least two or three viable paths through a course. However, this open-ended design also means that you'll usually be going through each race several times just to figure out where you're supposed to go. More often than not, you'll find yourself staring at the radar in the corner of the screen instead of focusing on the actual driving, plotting your course on the fly, and watching the radar arrows of the AI drivers to discover alternate routes that you may not be hip to. The game gives you a Crazy Taxi-like arrow that points in the direction of the next checkpoint, but given the game's numerous, winding paths to victory, this arrow is totally useless. The game also makes use of rubber-band AI to keep races close, so you'll definitely notice that the AI racers are always on your tail when you're doing well and will rarely pull so far ahead that they become untouchable, provided you're taking a viable route to the finish line.

Midnight Club II's cars and motorcycles aren't licensed, though you'll notice that some of the cars in the game definitely look similar to some popular makes and models. The only thing you can customize is a car's color. Each car is rated in four areas: speed, acceleration, handling, and number of available turbo boosts. Considering how much of the street racing scene is about car customization and tuning, it would have been nice to have seen some of that here as well. Instead, you're constantly moving from car to car as you unlock bigger and better models, and there's little reason to go back to a previous car unless you're attempting to handicap yourself. While you can pick from a handful of different colors for each model, some custom decal options would have also helped players differentiate themselves online.

Midnight Club II looks great for the most part. The cities are large, with some pretty good texture quality and variety. The car models look OK, though licensed cars would have been a plus. The game runs at a smooth frame rate, makes good use of particle effects, and does a good job of conveying a sense of speed--certainly better than the PlayStation 2 version. However, a few portions of the game, like the pedestrian animation, still look like they're a little closer to PS2 quality. All told, Midnight Club II pulls off its gritty look very well. Owners of high-end displays will find the game's widescreen 480p support to be quite pleasing.

The sound used throughout Midnight Club II is pretty standard. The engine noises, the sound of your tires on different surfaces, and the whooshing explosion of a nitrous boost are all present. Considering how well the soundtrack of Rockstar's last major release--Grand Theft Auto: Vice City--complemented the action, Midnight Club II's music is a bit of a letdown. The music is targeted at fitting the style of the cities more than the racing action itself, and it rarely meshes well with the game's high-adrenaline style and gameplay. Also, the game doesn't support custom soundtracks, which is a real shame.

The other major sound component is the radio chatter from the game's hookmen in the career mode. You'll encounter a wide variety of characters in the game, and they all have a handful of midrace phrases to spit your way. The voice acting itself is just fine--most of the accents used throughout the game sound passably authentic. But the script given to these voice actors and actresses is a pretty big letdown. Slang that was probably intended to come off as cool simply sounds hokey and stereotypical. The Latino racer calls you "ese," the British racer ends most of his quips with "ya mug," and the Australian racer has a vocabulary that sounds like someone sat down with a VHS copy of Crocodile Dundee and a menu from Outback Steakhouse and threw in as much "local" flavor as possible. Like any Xbox game worth its salt, Midnight Club II has Dolby Digital 5.1 support, but it doesn't make particularly effective use of surround sound setups.

While there are definitely a few bumps in the road, Midnight Club II is a fine introduction to auto racing for Microsoft's Xbox Live service. It may not be as visually stunning or control as well as some other racers, but the game does a little bit of everything and does it all well, making it a game worth looking for if you're an Xbox Live user. 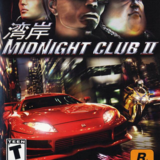