If you have the hardware to run it, this simulation really stands out.

Fifteen years ago, Microsoft ruled the computer skies with Flight Simulator. More recently, the civilian flight simulation market has seen some impressive competition rise to challenge the longstanding champion, including such sims such as Looking Glass' Flight Unlimited 3 and Terminal Reality's Fly. However, in what can only be seen as good news for fans of the civilian flight sim, Microsoft has met its challengers with another superb product in the Flight Simulator line.

Excluding Combat Flight Simulator, the last version of Microsoft's sim was Flight Simulator 98 - and what a difference two years can make. Microsoft Flight Simulator 2000 is available in standard form and in what's called the professional edition. The professional edition includes two additional aircraft (the King Air 350 and Mooney Bravo), six additional cities (plus the six present in the regular edition), and various extra features, including a flight-dynamics editor. Both versions enhance Flight Simulator 98 by adding the Concorde and the Boeing 777-300, as well as updated versions of some old favorites. But the real payoff comes in two disparate aspects of the game: its graphics and documentation.

One of the most daunting things about the early versions of the Microsoft Flight Simulator series was the feeling that you had to do a lot of homework on your own before having any fun with the game. However, Flight Simulator 2000 includes tutorial information right in the manual and actually makes it fun. The outstanding tutorials and accompanying text take you all the way from keeping the aircraft aloft to making an ILS (instrument landing system) approach, and many details in between. There are more than 100 pages of text devoted to these tutorials, and they are supplemented by a great deal of additional material within the game itself. The text is written by Ron Machado, a professional flight instructor whose explanations are uniformly clear, informative, and even amusing. There are even tests you can take to prove your progress. The instructional part of Flight Simulator 2000 is exceedingly well done and should assuage the fears of anyone who is interested in flying but is easily daunted by a steep learning curve.

The greatest strength of Flight Simulator 2000 is undoubtedly the graphics. The whole series has been known for its detailed and wide-ranging terrain, and Flight Simulator 2000 ups the ante with 12 tremendously detailed cities as well as outlying terrain that also looks good, even far beyond the major urban areas. Weather effects such as clouds and lightning are equally impressive and are modeled accurately during flight. The aircraft look great, and the instrument panels remain the best in the business.Although the graphics in Flight Simulator 2000 might be heaven for the flight sim enthusiast, getting them to look good has a very steep hardware requirement. The box actually says the minimum system for the game is a Pentium 166 with an optional 3D accelerator, but you'd best not even try the game with a machine that slow. In fact, you shouldn't even bother unless you have a high-end Pentium II or Pentium III, or else you'll be too bogged down by poor frame rates to care about much else.

If you can get it to run, you'll find that the flight models in Flight Simulator 2000 are superb and seem like improved versions of those included in the previous game, in that they are slightly less forgiving than before. The only problem is that the smaller aircraft ride too smoothly and encounter few of the continuous bumps and jolts that are experienced in such planes even in relatively calm air.

One of the key draws of the Flight Simulator series has always been its expandability. Users could always expect a host of third-party commercial and free add-on products in the form of additional aircraft and scenery. However, in this case, such expansions are hardly necessary, as the world of Flight Simulator 2000 is impressively detailed right out of the box. You can even join virtual airlines online and fly specified routes. Its expandability and large user base are a significant advantage that Flight Simulator 2000 has over its competitors.

The Flight Simulator series has quite an impressive pedigree, and the latest in the line still shows its good breeding. While its strong competition means that Microsoft's product is no longer the only great simulation out there, the reigning champion isn't yet ready to relinquish its title. If you have the hardware to run it, this simulation really stands out. 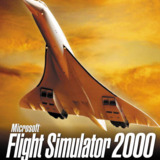