If Microsoft comes through on its promise to fix the game's flaws, this could easily be the best arcade baseball game out there.

Baseball season is now in full swing, both in real life and on the computer game circuit, but it's never too late for a rookie to hit the scene and make a big impression. At least, that's what Microsoft is hoping with regard to Microsoft Baseball 3D. This much-heralded rookie phenom comes to the show with plenty of potential, some truly innovative features, and a killer graphics engine. As is the case with many rookies, however, Microsoft Baseball 3D also comes with a ton of problems.

Since most computer baseball fans tend to think in terms of arcade vs. simulation, we have to drop Microsoft Baseball 3D squarely into the arcade category. It has some simulation-style features, such as an excellent player fatigue system, but these are few and far between. As an arcade title, the game can just about hold its own with Triple Play 99 and High Heat Baseball 1999. Triple Play 99, however, simply offers more features, while the realistic gameplay in High Heat far outshines Microsoft Baseball 3D.

Still, it's not a bad game. It offers a slimmed-down version of the usual exhibition and league play options. There is no home run derby, which is somewhat surprising considering the game's strong arcade flavor. Also, the league-play option supports full-season only, so it's 162 games or nothing. Microsoft Baseball 3D does not include a manage-only mode. The game is supposed to offer full-action multiplayer support over the Internet, but this feature is not included in the shipping version. A multiplayer patch is in the works.

Gameplay is generally good and fun, in the same way that Triple Play 99 is enjoyable. If you simulate an entire season, you'll find that the resulting statistics are pretty solid and realistic. If you take an active part in season play, however, you won't see too much realism. Hitting is either too easy or too hard, while pitching effectively is almost always too easy. The vast majority of outs were recorded on hard-hit line drives caught by infielders - not on fly outs or grounders. Also, the only errors I ever saw occurred behind second base, always with an easy grounder rolling between the fielder's legs.

The game's three difficulty settings show a pretty good, gradual increase in computer AI. Still, the AI is suspect in several areas, particularly when it comes to making a pitching change. A few times, the computer pulled his starter in the early innings when I was roping him hard. Most of the time, however, the computer pitcher will stay in the game for far too long - even in late-inning situations where the computer is losing and the pitcher spot is due up. The AI even left one pitcher in when his health (stamina) rating dropped to 0 percent - in fact, that pitcher stayed in for three more innings. Another weird AI glitch seems to allow "free walk-backs" after baserunning mistakes. More than once, I inadvertently hit the "advance all runners" button and went halfway to the next base. When I hit the button to return to the previous base, the computer let me go without making a play. In one such situation, my runner walked back to second after reaching third safely! Microsoft is aware of these AI issues, however, and promises to fix most of them in a soon-to-be-released patch.

The control options, which include the choice of basic or advanced batting interface, computer-assisted fielding, and computer-assisted baserunning, are also decent but tend toward the extremes. For example, the basic batting interface is pretty much a joke for anyone with a modicum of hand-eye coordination. After playing 20 games as the Cubs, for example, I had five players batting over .500 and two players on a pace to hit 100 home runs. With advanced batting enabled, on the other hand, I was striking out 15 to 20 times a game. When I did hit the ball using advanced batting, I was very impressed with the realistic effects. If you line up the batting crosshair just right, you'll really nail the pitch. If you can't quite line it up, you'll pop up, ground out, or stroke a foul out of play. It's an innovative interface with a lot of merit, but it is incredibly difficult to master.

Similarly, the computer-assisted fielding and running is an all-or-nothing deal. With the fielding option enabled, the computer takes over completely, making the game both easy and a little boring. With this option disabled, you will be very hard-pressed to make even a quarter of the plays the computer handles with ease. A fielding system where the computer simply gave you a little help starting the fielders in the right direction, then turned control over to you, would have been better. Alternatively, Microsoft could have followed 3DO's lead from High Heat and made computer-assisted fielding and throwing two separate options. A fourth control option, which enables and disables onscreen pitch and batting menus, does not seem to have any real purpose.

Other aspects of gameplay are something of a mixed bag. The physics of the game are quite impressive. Curving, slicing, and looping hits look the part, and you can actually wrap a home run around the foul pole (which is perhaps the coolest thing in the game). Also, your players will tire during a season, so you can't just pick a starting lineup and go with it through 162 games. You have to give some players a day off here and there - a very welcome feature.

On the other hand, Microsoft Baseball 3D does some things a bit strangely and lacks some fairly basic features. For starters, the pitching interface is on a timer. In other words, you select the pitch you want to throw, then the computer automatically starts you windup. During the windup, you get one to two seconds to aim the pitch. So the pitch location is not only determined by your pitcher's accuracy rating, but also by your thumb speed. It would make a lot more sense to pick a pitch, pick a location, and then let the pitcher's accuracy determine the final results. The timer system also makes it very difficult to pick off base runners, since you don't control the start of the windup.

Stealing a base is extremely difficult. In fact, after nearly 100 attempts to do so with speedy runners (Lance Johnson, Mickey Morandini, and Sammy Sosa), I reached second only twice. Most times, my runner was out by so much, the second baseman actually had to run towards first to tag him. That just didn't seem right.

During season play, your players' season and game statistics are not reported during games. So instead of hearing that Mark McGwire has gone three for three with three home runs in your current game, you only see his 1997 stats. This is just plain wrong - if you play a full season of simulated baseball, you want to see what your stats are, not what they were last year in the real world.

As far as missing features, you won't find any wind effects or weather of any kind in this game, nor will you find any pure defensive ratings for each player. Players do have speed and arm ratings, which affect how quickly they can make a play and how well they throw, but there is no glove or range rating, or anything else that would help differentiate the players' defensive capabilities. Also, the game's general manager feature, through which you can edit, create, and trade players, is not integrated into the game. Instead, you have to launch it separately.

The game's most prominent feature, the graphics engine, is outstanding and is clearly the best of the bunch this year. The detail level is excellent, most of the stadiums look great, and the player models are crisp and well animated. The game offers a variety of batting stances and pitching motions, too. Idle animations, such as fielders walking to their positions after an out or a walk, are very good and add a nice sense of immersion to the game. The fielding animations could use some work, however, as the infielders tend to stay in one place then stab out an arm at the last minute to make a play. Similarly, outfielders run around with their arm in the air until the ball is caught.

Microsoft Baseball 3D's sound effects and play-by-play are rather odd. Instead of complementing each other and fitting together to form a realistic game atmosphere, the various sound effects seem to be in constant conflict for your attention. The crowd noises are almost always too loud, while hits are usually too quiet to be heard. The hits you can hear (the ones that make a nice loud "thwack" noise) are almost always weakly hit ground balls. The play-by-play, which is fair but nothing special, sounds like a low-quality 8-bit recording that's coming from the next room.

In the end, Microsoft Baseball 3D clearly has its share of problems. It is still an enjoyable arcade baseball game, and thanks to features like player fatigue, the realistic-but-tough advanced batting, and the ultrarealistic ball physics, the game has a huge upside. If Microsoft comes through on its promise to fix the game's flaws, this could easily be the best arcade baseball game out there. Until then, however, it rides the bench as Triple Play 99 and High Heat Baseball 1999 platoon the field. 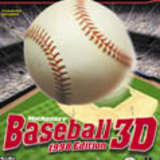