It's right there in the name, just as it should be: Codemasters' Micro Machines V3, an experience that strays from the path of the current pack of racing games by utilizing tiny little vehicles in a tiny little world. The delivery is what you'd imagine it would be, as if the folks from the film Land of the Giants knew how to drive, save for the requisite chase from the family cat (a feline is present, though this one keeps still).

MMV3 is the third in its series of console and PC racers, once again seeing you through competitions with miniature cars, boats, tanks, and other vehicles from a top-down isometric perspective over a variety of "cute" theme courses. In one race, for example, you navigate a Bigfoot truck around a cereal-strewn breakfast table, while in others, you harness the controls of a hovercraft skimming above a backyard pond or control a Formula 1 car speeding along the rim of a pool table. Beyond simply outdriving the opposition within these environments, you can also acquire power-ups to smash, repel, snag, or blow up your rivals to momentarily stop them dead in their tracks while you take up the lead.

Rounding out the game's overall value is a large number of different courses (48 in all) and a variety of play modes. The single player will undoubtedly get the most mileage out of the Grand Prix-like challenge, but options are also available for time trials (against your own or preset records) or a head-to-head race against a computer opponent. The multiplayer opportunities, however, are even more plentiful. Up to eight people can play in either a single race, a tournament, on teams, or in knockout bouts in which whoever loses is out of the running, until only one player, the winner, remains. Other options include anteing for the competition prize cars players have obtained by winning previous races, or sharing a controller with another driver (each using half, facing each other).

Unfortunately, the multiplayer modes aren't nearly what they're cracked up to be. Since the contestants are limited to a single screen, if someone falls off the raceway, lags behind, or trails out of the track's boundaries for even a few seconds, he'll explode. The game then halts, the cars are reset onto the course, and the race resumes. While a split-screen mode would be likewise untenable, this inching along clearly sucks unless all drivers involved are incredibly (or equally) proficient. Even then though, the computer often rewards cheating. For instance, when you drive off the course to cut far ahead of everyone else the computer will occasionally award you, when it should, in fact, strike you down for cheating.

This isn't the only wart Micro Machines has either. The main problem is that the quick and feeble charm it possesses wears off fast, and all the courses, options, and vehicles in the world (even this little tiny one) can't make up for the fact that the gameplay becomes incredibly monotonous almost immediately. All in all, Micro Machines V3 is a nice diversion from the first- or third-person racers that seem to crowd the field these days. But its repetitive gameplay and lack of a strong multiplayer mode make it only a brief detour. Rental brief, I'm afraid. 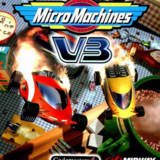 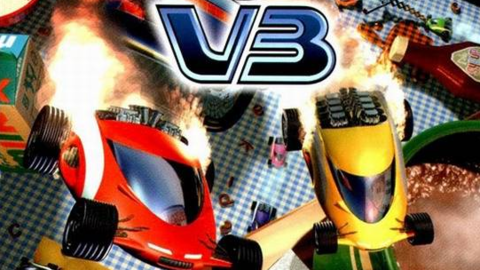