Unlike recent games that attempt to imitate the gameplay and style of Micro Machines, Micro Machines 1 and 2: Twin Turbo proves that nothing can improve on a series that neared perfection to begin with.

If history is any indication, Codemasters' Micro Machines series is going to be with us for a long time. Name any game system, and chances are it's had a Micro Machines title on it. The NES original was a triumph of gameplay and quality, and it transferred well to the black-and-white Game Boy a few years later. In the 16-bit days, the libraries of the SNES and the Genesis were graced by a Micro Machines title as well. Even in this age of "modern" gaming, the glitz and glamour required by next-generation games have been kind to the series, resulting in two enjoyable PlayStation releases. Now, THQ brings the series back to its roots in the Game Boy Color version of Micro Machines 1 and 2: Twin Turbo. You read correctly, two games for the price of one.

Those who've been playing the Micro Machines series since the beginning will recognize this game, since it's basically a colorized update of the two prior Game Boy releases, only without the flicker and slowdown. For those new to the series, Micro Machines 1 and 2 is a top-down arcade-style racing game honoring Galoob's lovable minivehicles. After choosing your driver, you zoom along track after track of surreal raceways, such as a breakfast table, a bathtub, a pool table, or even a child's desk. The first game on the cartridge, Micro Machines, has 24 bizarrely unique tracks to race on, while the second, Micro Machines 2: Twin Turbo offers up an additional 24 for your racing pleasure. Other than the second title's larger sprites, both games play identical to each other: Press A to accelerate, press B to back up/decelerate, and use the D-Pad to steer your car. Driving is responsive, the difficulty is balanced, and the gameplay is as noncomplex as can be. In fact, the only visible flaws in each title's gameplay are those that have been with the series from the beginning: Recovery from crashes in the first game is far too lengthy, while the increased sprite size of the second game makes everything a bit difficult to react to. Though worthy of mention, these flaws are minor in effect, and only the most nitpicky of gamers will find themselves annoyed by them.

Oddly enough, one of the flaws that had been fixed in the previous Game Boy version of Micro Machines is back in this release. The two-player mode is not a link-cable-style mode. Instead, player one must use the D-Pad to steer, and player two must use the A and B buttons, while both cars accelerate forward at top speed. Even though this setup preserves the sanctity of the original NES release, it relegates two-player matches to the realm of novelty rather than utility. Additionally, with the amount of courses available, the presence of a save feature (password or otherwise) would have been nice. Twenty-four courses is a bit much to complete in a sitting. As it stands though, these flaws don't detract from the overall quality of gameplay, but both games would have been more enjoyable had these concerns been addressed.

Speaking of quality and enjoyment, do you like vibrant, well-drawn graphics? How about sound and music that make for an enjoyable gaming experience? If so, Micro Machines 1 and 2: Twin Turbo aims to please. Somehow, developer On-line has managed to re-create every detail and touch of the Codemasters' original within the confines of the GBC's 160x144 resolution. School binders look like binders, oranges look like juicy oranges, and eating utensils look just like real forks and spoons. That sentence alone should convey how quirky and wonderful the game's graphics are. However, for those who focus on minor details, the presence of dust particles, explosions, and parallax scrolling ought to please even the most jaded gamer. Even the GBC's oft-maligned speaker sees superb use throughout the game. The music is trippy and engaging, engine sounds fit the miniaturized vehicles perfectly, and crash-and-spill sound effects almost make one think the game has a rumble feature. Sure, the sound is sparse at times, but it never comes across as tinny or scratchy.

Unlike recent games that attempt to imitate the gameplay and style of Micro Machines, Micro Machines 1 and 2: Twin Turbo proves that nothing can improve on a series that neared perfection to begin with. Not only that, but you get two games for the price of one with this release, making for an unregrettable purchase. 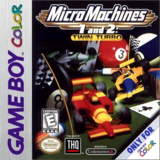