Metroid Prime Pinball successfully pulls off the insanely ingenious concept of merging the distinct look and feel of Nintendo's sci-fi adventure series with a great game of pinball.

Not since The Pinball of the Dead has a concept of Metroid Prime Pinball's caliber become a reality. Seriously. Well, sort of. But the idea that the game of pinball may be used to simulate virtually any other challenging struggle is a good one (since pinball is cool), and Metroid Prime Pinball pulls it off very well--both by being a fun and great-looking pinball experience, and by being a faithful spin-off of one of the best Nintendo games of the past decade.

Those familiar with Nintendo's interstellar bounty hunter Samus Aran and her series of Metroid action adventure games will of course know that Samus' power suit is capable of rolling up into a spherical morph ball. Samus in morph-ball form becomes the ball in Metroid Prime Pinball, and you get to knock her around a half-dozen different tables, earning big points and bumping off some of Samus' familiar foes in the process. What's great about Metroid Prime Pinball is that it behaves very much like you'd expect from a pinball machine--namely, in terms of the physics of the ball getting bounced around. But at the same time, there are tons of familiar Metroid touches to be found here, both from a presentational standpoint and even in terms of gameplay. In some instances, Samus actually busts out of morph-ball mode and opens fire on her onscreen enemies, letting you direct her firepower towards the foes. These are brief, fun-filled moments.

Metroid Prime Pinball features several modes of play: multimission, single mission, and multiplayer. The multiplayer mode is simply a score competition for up to eight players (only one copy of the game is required), and it stresses mastery over the one competitively focused level. Multimission mode is the primary way to play; it lets you choose from a couple of starting tables and gradually work your way into new ones. This handful of additional tables is then unlocked for use in single-mission mode, where you can play on any table to earn the highest possible score. Metroid Prime Pinball, like any good pinball game, has a complex scoring system that works well to entice you to keep trying to push your point totals higher and higher, into the millions. Your high scores are automatically saved, as you'd expect.

The funny thing about Metroid Prime Pinball is how carefully it captures the feel of the original Metroid Prime for the GameCube. The two starting tables are the pirate frigate and the Tallon overworld, and these areas are pinball-style spitting images of the equivalent places in Metroid Prime. On the Tallon overworld level, for instance, rain showers occasionally drench the playing field. The attractive visuals are highly evocative of Metroid Prime, making this a great way to rekindle some nostalgia for that game. And yes, you can look forward to battling some of Metroid Prime's most notorious bad guys and bosses, such as the Omega Pirate and Meta Ridley. The boss battles invariably involve trying to smack the villain with the ball as hard and as often as you can, while taking care to avoid attacks that threaten to push the ball past your flipper defenses and into the gutter.

The multi-mission mode offers a good challenge and a nice amount of variety. By shooting Samus into various ramps and targets, you'll open up a variety of quick minigames, in which Samus needs to beat down some bad guys or wall jump to reach an artifact. Collecting enough artifacts is what lets you finally engage the final boss of the game, who's quite a tough nut to crack. Successive levels of difficulty for the different tables also create a variable challenge. What's also pretty cool is that Samus can collect power-ups just like in a typical Metroid game, giving her access to missiles and power bombs, which help cause greater damage to enemies.

The game is easiest to control using the left and right shoulder buttons on the DS, which work well to emulate the feel of hitting flipper buttons on the side of a pinball machine. The only issue with that is trying to bump the table (usually to prevent the ball from going into the gutter), which you do by dragging across the touch screen. After a while it becomes easier to quickly use your thumb to do this, but it takes getting used to. You might as well get used to this ability, too, since it seems to be impossible to tilt the table. Also, since all the tables in the game contain action linked on the top and bottom screens, initially it's a little disorienting when the ball passes through the gap between the screens--but not for long.

For good measure, Metroid Prime Pinball comes bundled with a DS-compatible rumble pak, which looks like a black Game Boy Advance cartridge and fits into the system's bottom port just like a GBA game would. The rumble pak causes the system to vibrate gently but noticeably as Samus bounces off of bumpers and stuff like that. You can play the game just fine without it, but it's a nice way to get the sort of tactile feedback you'd expect from playing a real pinball machine. The only thing about the rumble pak is, it makes sort of a weird twittering sound whenever it kicks in, so if you're trying to play the game at a low volume, it can be pretty annoying.

Speaking of volume, Metroid Prime Pinball's audio is at least as good as its graphics. It features great remixes of familiar Metroid musical themes, and more voice-over than there was in Metroid Prime.

This is a fun, simple game that you can keep coming back to. It's a great way to kill a few minutes if you're playing games on the go, but the tables in Metroid Prime Pinball are also genuinely challenging enough that it's tempting to want to keep pushing your highest score even higher. That the game looks and sounds so much like Metroid Prime is just icing on the cake. So, can we get Metroid Prime Hunters already? 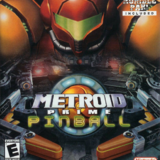