Other M is a strong departure from previous Metroid games, with fantastic combat and exciting bosses that make this another great entry in the series.

Other M is not your typical Metroid experience. The tenets of this venerable franchise are desolate feelings of loneliness coupled with an emphasis on exploring an alien world, but Samus Aran's latest adventure goes in a much different direction than most of its forebears. Intense, close-quarters combat is the backbone of this journey, and the linear level design ensures that you're continually pushing forward. This action-oriented approach removes many of the elements that are core to the franchise, but those holes have been filled with refined battle mechanics that make every fight a thrill. Combat is exhilarating, forcing you to move with precision if you want to stay alive against the swarming alien horde, and the gigantic bosses you square off against test your skills in unpredictable ways without ever feeling cheap. Drawn-out cutscenes do interrupt the breakneck pace of your adventure, and small graphical blemishes and control quirks keep this from reaching the dizzying highs its predecessors are known for. But Other M is still a great adventure that is sure to please longtime fans and bright-eyed newcomers alike.

One day, while cruising around the galaxy in her state-of-the-art rocket, Samus happens upon a distress signal from a nearby ship. Although the setup is typical for the franchise, the manner in which the events are told is anything but. Story is a huge aspect of Other M, spelling out every moment on board this cursed vessel in exacting detail. It's a jarring contrast from most other games in the series, but it's not without its bright spots. Samus' mysterious backstory is finally fleshed out, and the beautifully realized CGI scenes are a joy to look at. However, these interludes have a tendency to overstay their welcome. Story segments stretch on for upwards of five minutes, which puts a halt to the hectic pace of the core adventure. Furthermore, the voice acting is so stilted, and the dialogue so wooden, that it's hard to accept these characters as believable. This is also the first game in which Samus has been given a voice, albeit a squeaky and annoying one that makes it tough to take her seriously. Change is not inherently bad, but the overabundance of story in Other M is a negative step away from Metroid tradition.

Things become a lot more interesting once Samus shuts her big yap. The action in Other M plays out primarily from a third-person perspective, but its controls are far from traditional. You move Samus around the ship holding the Wii Remote horizontally--there's no classic controller or nunchuk support--and it does take some adjustment to move on a 3D plane using a D pad. Aiming is handled automatically, so you blast whatever creature is in your line of sight, whether it's above your head, below your feet, or dead ahead. Rolling into a ball and performing wall jumps are just as easy, which makes roaming this desolate ship not only painless, but fun as well. But the most interesting aspect of this control scheme is the implementation of a first-person perspective. When you point the remote at the screen, your view switches so that you're staring through Samus' visor. This allows you to freely look around the environment or fire missiles, although you cannot walk around. This switch can be jarring at first, but it becomes second nature before long. Pelting enemies with your ice beam and then switching to a first-person view to finish them off with missiles is incredibly smooth, which makes this control scheme not only unique, but quite satisfying as well.

Samus does have one new move that ratchets up the intensity of confrontations: a dodge mechanic. By tapping the D pad in any direction the moment before you're hit by an attack, you dive gracefully out of the way. If you are holding down the fire button at the time, your weapon receives a full charge, which allows you to avoid a glancing blow and to counterattack against any enemies dumb enough to think they can take down a trained bounty hunter. You can also initiate a melee strike on weakened foes to finish them off in style, but this isn't quite as responsive. Some enemies require you to jump on their head to kill them, which is difficult given the inherent imprecision of using a D pad to move around on a 3D plane. Aside from that small control quirk, your actions in Other M are incredibly smooth. Furthermore, a threat of imminent death keeps you on your toes. Unlike in every other game in the series, your enemies do not drop health power-ups when they die. You can regain a little health by concentrating for a few seconds when you're in a critical state, but to get filled up you must enter a save room. This makes health conservation hugely important, so you can never let your guard down.

Other M is at its best when you pit your combat prowess against the giant bosses who populate this forsaken spacecraft. There are plenty of intense encounters sprinkled throughout this adventure, and they demand that you use every trick you've learned along the way in order to survive. In some of the fights, you must use an item you've recently acquired--such as when you have to grapple the open mouth of a red-hot lava dragon--and other fights force you to try a variety of different techniques to wound these beasts. But the core of every fight is the dodge mechanic, which is the only way you can stay alive. If you're caught napping for even a second, bosses can sap away huge chunks of your energy with just one blow, so your focus must be strong if you're going to survive. Once you master your dodge, the fights do become significantly easier, but there are still a few bosses down the stretch who will accelerate the heart rate of even Metroid veterans.

It's a good thing the combat is top-notch, because the exploratory elements have been drastically stripped down from previous games in the franchise. Your next objective is always highlighted on your map, and it's fairly easy to figure out where you need to go next. This linear progression does take away the feeling of being lost in an alien world that so frequently encompasses other Metroid games, but it is still fun moving around this ship. A few clever environmental puzzles force you to put some thought into how to proceed, so even if you know what room you need to go to, it's not always obvious how to get there. Plus, there are still lots of items strewn across the land. Extra missiles, energy tanks, and charge accelerators are sprinkled liberally throughout the spaceship, and it's easy to get sidetracked for hours while you search for every lost object. The biggest issue with the level design crops up on replays. Because there is only one way to proceed, you take the same path in every play-through, which is a sharp contrast from previous Metroid games.

Although searching for every hidden item is one of the best parts of exploring this ship, taking in the sights is also a treat. There is strong artistic design in Other M that gives every new area you visit a distinct look. There aren't any places that are as eye-catching as the beautiful Phendrana Drifts from Metroid Prime, but a creepy underground lair teeming with insects and overgrown foliage creates a forbidding feeling, and the heat-intense lava world is striking. Unfortunately, the weak technical aspects are no match for the artistic vision. Low-resolution texture maps permeate this game, which gives everything a hazy look. Because of this, Other M is not as impressive to look at as it could have been. The music also is similar thematically to previous games in the franchise, but the accompanying score sounds more like outtakes from older entries than a moody new soundtrack. The strangest part of the audio is the absence of the famous Metroid tune when you nab a new item. That jingle is so ingrained in the franchise that it's strange to collect an upgrade and not hear it.

It should take around 12 hours to play through Other M, which is a fine length for an action-focused game. But because the combat is so thrilling, and it's so rewarding to search for every item along the way, the ending pops up all too soon. You'll likely be left wanting more of this exciting adventure, a testament to the invigorating quality of the smoothly executed shift in focus. People expecting Other M to conform to the elements that made Super Metroid and Metroid Prime classics may be disappointed at first, but stick with it. This is another great entry in the series, and a refreshing change of pace for the well-traveled bounty hunter.

View Comments (19)
Back To Top
8.5
Great
About GameSpot Reviews 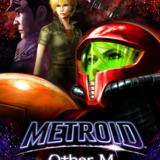