The Metal Slug games represent a high watermark for arcade side-scrolling shooter graphics, and the PlayStation port of X does not disappoint.

Since the popularization of polygonal graphics, the side-scrolling shooter has been deemed an antique, something to be looked upon with nostalgia. But as NeoGeo owners and arcade junkies alike will tell you, the side-scrolling shooter is alive and kicking in the Metal Slug series. And while SNK may have pulled out of the US market, Agetec has done us all a big favor and decided to release the PlayStation port of Metal Slug X stateside.

Metal Slug X is basically a beefed-up version of Metal Slug 2. It features new enemies, new weapons, and more bosses. The hallmarks of the series, namely superdeformed military hardware, screen-filling bosses, and bizarre weaponry, are all present and accounted for in X. The mechanics of the game are simple, and anyone who's played a side-scrolling shooter from Contra on forward will find the controls to be instantly familiar. Walk to the right, shoot enemies, and dodge bullets. The one-hit kill is in effect, but the game allows for infinite continues, which makes things more bearable. You start off with a handgun, which you can upgrade to an assortment of special weapons, including a heavy machine gun, shotgun, rocket launcher, laser, flamethrower, and so on. You also have a satchel of grenades at your disposal, but like the ammo for the special weapons, these are limited.

As you advance through the levels, you'll come upon hostages, who will reward you with a weapon upgrade, extra grenades, or a point bonus. Occasionally, a hostage will just follow you around and back you up with Street Fighter-style energy blasts. At first, the enemies look like your average cannon fodder-- faceless grunts in green fatigues. But Metal Slug X isn't any ordinary shooter, and the character design exemplifies this. The second level is an Egyptian temple populated by poison-breathed mummies and mummy dogs; later levels introduce sewer-dwelling mutants, aliens, and other unpleasantries.

One of the defining points of Metal Slug is the inclusion of supervehicles--or to put it another way, slugs. These are vehicles that you come upon once or twice per level--they grant you greater firepower and a protective shell. Slugs come in different forms depending on your environment--there's the tank, the jet, the camel, and the robot suit. Controlling the slugs can take time to master, as the D-pad controls your movement as well as the aiming of the vehicle's main cannon; however, the carnage you can inflict with these machines makes it worth the trouble.

The Metal Slug games represent a high watermark for arcade side-scrolling shooter graphics, and the PlayStation port of X does not disappoint. The sprites may not be as sharp or detailed as their arcade counterparts, but they are all still incredibly well animated. Every character has a different animation depending on what's happening onscreen, and, as such, characters convey an inordinate level of personality. This quality animation extends to the backgrounds as well, so it gives this 2D world a sense of depth, a kind of kinetic energy that complements the frantic gameplay perfectly. The game's score is also quite excellent, helping set the mood for mayhem. The weapon fire is crisp, and the booming announcer adds to the game's already silly atmosphere.

What really separates Metal Slug X from the rest of the crowd is its tongue-in-cheek presentation. For example, enemy soldiers laugh when you die but shriek in horror when they realize you've come back. Or when a certain midboss is defeated, his corpse falls off the screen and is devoured by a giant killer whale. This skewed sense of humor, combined with its frenzied gameplay, gives the game a unique flavor and makes it one of the best side-scrolling shooters out there. 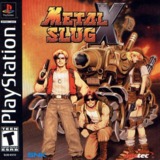 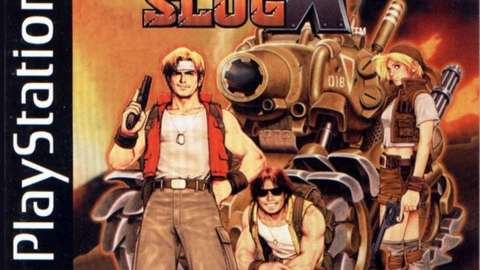 The Metal Slug games represent a high watermark for arcade side-scrolling shooter graphics, and the PlayStation port of X does not disappoint.