After years of scattered, piecemeal releases on various home consoles, SNK marks the 10th anniversary of the original Metal Slug by rolling up all seven Metal Slug arcade games into a single package with Metal Slug Anthology. It's a must-have for Metal Slug completists, if for nothing else, because it marks the first time that the relatively new Metal Slug 6 has appeared anywhere other than Sammy's Atomiswave arcade hardware. However, those same completists will likely be bothered by the unfortunate peppering of short-but-noticeable in-game load times found in all of the games. The Wii controller isn't ideal for Metal Slug, and though there are five different control schemes that make varying use of the system's motion controls, they all feel gimmicky. None are as responsive as a standard control setup, making the use of a GameCube controller all but necessary. Yet even with these burdens, the series' comically violent style and relentless action still make for a singularly awesome experience: one as effective for fresh-faced draftees as it is for vets of multiple Metal Slug missions.

From a distance, the Metal Slug series doesn't look too different from the countless side-scrolling shooters that were pervasive during the 16-bit era. You run to the right, shooting and tossing grenades at swarms of enemies while dodging their bullets, picking up weapon upgrades, and rescuing POWs, with the action regularly punctuated by screen-filling boss fights. As generic as that might sound, Metal Slug has always separated itself from the pack with a goofy sense of humor, nicely detailed 2D graphics, and the kind of manic, sometimes punishing gameplay that leaves your hands aching. You'll also regularly happen upon the titular metal slugs--high-powered armored vehicles that come in a variety of forms. At their most basic, slugs look like superdeformed tanks, but they can appear as helicopters, jets, submarines, mobile suits, camels, donkeys, and more.

The games in this collection are mostly arcade perfect, right down to the bouts of slowdown you would have experienced in the arcade. The only thing that disrupts the mood are the extra loading screens that make the pauses between sequences linger for a little longer than they did originally. It is a pretty minor point, one that only series veterans will notice. But because that's basically the audience that would buy Metal Slug Anthology, it's still unfortunate. An inherent issue with bringing arcade games home is reconciling the fact that you don't need to drop quarters into the game to keep playing when you run out of lives. Limited continues can be too punishing for some, while unlimited continues can eliminate much of the challenge. Metal Slug Anthology doesn't address the issue. Instead the game sidesteps it by letting you choose whether you want limited or unlimited continues. You can save your progress at any point in any of the games, a luxury that any arcade player would have killed for after having run out of quarters midway through a game. Metal Slug Anthology also features an optional autofire setting that lets you simply hold the fire button rather than constantly tap on it, which is a welcome addition for the aging (or simply lazy) Metal Slug fan.

There's a good half-dozen different controller configurations to choose from, and considering the simple joystick-and-three-button setup that Metal Slug requires, it's surprising that none of the Wii-controller-based options work quite right. The so-called "arcade configuration" has you holding the Wii remote vertically and tilting it as though it were a giant joystick, using the C and Z buttons to jump and fire, and a flick of the nunchuk to toss a grenade. You can hold the Wii remote sideways, hitting the 1 and 2 buttons to jump and shoot, but again, you have to shake the remote to throw grenades. There's even an option that relegates all controls to the Nunchuk, effectively allowing for one-handed play. Metal Slug is challenging enough without gimmicky controls, and what's worse, you'll likely have to refer to the manual to figure out how any of them work. Thankfully, Metal Slug Anthology can also be played with the GameCube controller, which proves to be closest to arcade controls, though surprisingly, there's no support for the classic controller.

Though the settings and the enemies you fight have gotten more bizarre as the series has progressed, the basic gameplay formula has remained consistent. However, the quality of the action hasn't always been as consistent. Metal Slug 3 is arguably the most ambitious, with a final battle that begins with a déjà vu fight against General Morden in his helicopter and ends with you fighting a gigantic alien mother brain in space. Metal Slug 4, on the other hand, wasn't actually developed by SNK and almost feels like a Metal Slug bootleg. Metal Slug 5 was better and made the nearly inconsequential change of allowing your character to do a running slide, which was only useful for getting through low passages in a few specific areas. It was a change that disappeared in Metal Slug 6, though Metal Slug 6 has brought more changes to the series than the previous five sequels combined.

Metal Slug 6 changes things up from the start when you're given the choice between an easy and a hard mode. The hard mode offers a standard Metal Slug experience, while in the easy mode your standard infinite-ammo pistol is replaced with an infinite-ammo version of the heavy machine gun. The easy mode also cuts the game short, ending before you get to the game's final level. While there have always been multiple characters to choose from in Metal Slug, they've always been functionally identical. Not only does Metal Slug 6 make Ralf and Clark from King of Fighters into playable characters, it gives each of the six total playable characters in the game some unique characteristics, such as unique alternate attacks, more durable slugs, and more powerful weapons. Additionally, characters can now carry two weapon power-ups at a time and can switch between them on the fly. The sum of these changes doesn't really affect the overall feel of the game and seems a bit like change just for the sake of it.

On a technical level, the switch from SNK's own NeoGeo hardware to Sammy's Atomiswave hardware is immediately apparent. The hard-pixel look that was indicative of NeoGeo games is gone, giving the graphics a kind of soft, dull look. While it doesn't have the crisp feel of the previous games, Metal Slug 6 will automatically zoom the camera out during specific encounters, a little trick that allows for even bigger boss fights. Metal Slug 6 also sounds quite a bit different from its predecessors, with the rescued POWs featuring a new voice sample and music that sounds much less synthesized. Considering the inherent throwback nature of the series, these changes, while a technical improvement, make Metal Slug 6 feel less authentic.

Metal Slug Anthology is ultimately a great value. Along with seven full arcade games--each rife with alternate paths, hidden areas, and some clever Easter eggs--you get music and concept art galleries. You also get a confounding Q&A with developers of the series, where they discuss topics ranging from the underlying design ethic of the series to their personal casting choices for a nonexistent live-action Metal Slug movie. While the traditional 2D action on offer in Metal Slug Anthology might not seem like the best use of the forward-thinking Wii hardware, that doesn't keep it from being a good deal of fun. 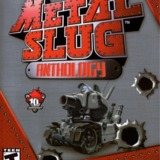