Metal Slug's first foray onto the GBA is a resounding success.

Metal Slug Advance isn't a watered-down conversion of one of the NeoGeo console's classic Metal Slug games, but rather, it's an original offering developed specifically for the Game Boy Advance. The same graphics, audio, and run-and-gun design that made the NeoGeo games so beloved were used to fashion together five brand-new levels for the GBA version, and a new card-collecting quest was incorporated into the mix to extend the game's overall longevity by giving players a few new weapon and tank upgrades to play with. The result is a great, action-packed shooter deserving of the Metal Slug name.

It's remarkable how closely the GBA offering comes to duplicating the sights and sounds of the NeoGeo Metal Slug games. The GBA version has the same goofy-looking character graphics and animations, as well as the same set of sound effects. Anyone familiar with the way the heroes throw grenades or lash out with their knives in the arcade game, or with voice clips that announce weapons such as "machine gun" and "rocket launcher," will be pleased to see and hear the same here. The multilayered 2D backgrounds that make up the game's jungle, mountain, beach, and desert-themed environments are particularly impressive, because they incorporate animated wave motion and lighting effects that many developers don't usually invest the GBA's resources on. It doesn't appear that SNK Playmore had any problem packing the screen with dozens of enemies and bullets either, although eagle-eyed fans will notice that bullets and explosions don't kick up nearly the same amount of debris that they did on the NeoGeo. The gooey blood sprays also didn't make it into the game. Otherwise, between the enemy-filled levels, the dozens of different weapons, the giant mechanized bosses, and the frequent opportunities to hop into the SV-001 tank, this literally is a near-perfect replica of the mega-megabyte NeoGeo games that people fell in love with.

Like its NeoGeo counterparts, Metal Slug Advance is an action game in the truest sense. There aren't any puzzles to solve or keys to collect. After you pick one of the two available characters, you're dropped into the first mission carrying only a pistol and a handful of grenades. Your job is to run, jump, and shoot your way though masses of minions to destroy the mechanized bosses waiting at the end of each of the game's five increasingly large levels. Rescuing friendly POWs or blowing up certain objects, namely rocks and crates, reveals weapon icons that you can pick up, such as machine guns, shotguns, flamethrowers, guided rockets, and so on. There are more than a dozen different weapons in all. These include the series' two trademark weapons: fragmentation grenades, which can be hurled at enemies with the quick tap of a shoulder button, and the Metal Slug itself, which is a bizarre little armored vehicle that, besides coming stocked with machine guns and explosive shells, can also jump across gaps using its hydraulics as if they were legs.

The bad guys can return fire with bullets, grenades, and guided missiles of their own, in addition to lashing out at you with knives or attacking you from the relative safety of tanks or choppers. To say that the screen constantly fills with dozens of enemies, bullets, and explosions is a fair assessment. There are many spots where sheer twitch reflexes are required to duck under and hop over all the bullets and explosives that are tossed at you. Additionally, there are many areas where you'll have to sacrifice multiple lives to reveal the best way to get past whatever onslaught or boss the game is currently stalling you with. This includes pre-scripted sections where the screen locks into a fixed position and enemies leap out of the water or fly in on helicopters in efforts to overwhelm you.

There's no denying how challenging this game is. The first two levels are moderately tough, and the scale of difficulty only skyrockets from there. The fifth and final level seems to drag on forever, sending players up a tall tower full of troops and tanks and culminating in a lopsided fight against a boss with a half-dozen different attacks. Luckily, the developer was kind enough to implement a modest health meter, as well as split the levels into sections. This lets you pick up from the section you were playing instead of having to start the entire game or level all over again in the event that you die. While unlimited continues does make it easier, overall, to get through the entire game, good reflexes and loads of practice are still very much required to actually accomplish this feat.

Metal Slug Advance incorporates a card-collecting gimmick that serves as an incentive to get through levels without using the continue feature. Certain POWs and enemies leave behind card icons when you come into contact with them. These cards are stored in an index from the mission selection menu. Of the 100 possible cards, most don't do anything except provide an indication of various achievements. However, some can give your character permanent health or ammunition increases, and a select few will even unlock additional forms for the Slug tank or will open up secret areas (including a large dungeon that's full of POWs). The catch underpinning all this is that losing a life causes you to drop all the cards you've picked up during the level you're in. So, to actually hold onto these cards and add them to the index, you have to get through the level unscathed. This compromise lets those people that merely want to finish the game do so, and at the same time, it provides a meaningful reward for players that have the dedication to master every nook and cranny of each level.

Despite that the game only includes five main missions (along with a few bonus levels) and doesn't include a two-player mode, Metal Slug Advance doesn't come across as underdeveloped or altogether brief. Much of this has to do with how tough the levels and bosses are, and certainly shooting at every rock and tree in the scenery in search of rare cards also helps draw the experience out a bit, but there's also something to be said for how much fun it is to just replay a level for the sake of goofing around and blowing stuff up. Between all the weapons in each level and the presence of alternate pathways in some of them, no two run-throughs are identical. Also, there are so many different animations for enemy soldiers, like when they slump over dead, when they run away in fright, or when they leap out with knives drawn, that you're bound to crack a smile on subsequent replays.

Metal Slug's first foray onto the GBA is a resounding success. Even though Metal Slug Advance is a brand-new game, it has all the sights, sounds, and charm of the NeoGeo games it's based on. The addition of a card-collecting quest doesn't get in the way of the classic run-and-gun design at all. Instead, it gives players one more incentive to play through each level multiple times, as if the goofy animations and big explosions weren't already incentive enough. 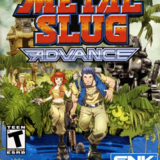