In an impressive show of style and technical brilliance, Metal Gear Rising: Revengeance takes a turn for the brutal and rarely looks back.

Editor's note: The text below has been edited to add information regarding the PC version of Metal Gear Solid: Revengeance. - PB, 1/14/2014, 16:00 PST

Metal Gear Rising: Revengeance sees the cybernetically enhanced Raiden severing his ties to the stealthy gameplay of old, charging headlong behind enemy lines with a fresh pack of batteries and a thirsty blade by his side. His newfound lust for battle fits nicely into the quirky Metal Gear universe, thanks to the persistence of the Sons of the Patriots plotline and other carefully laid traces of time-honored traditions. Still, despite these ties to the past, Revengeance is ultimately a departure from the old way of doing things. Almost every scenario demands conflict rather than silent infiltration, and instead of conforming to his environment, Raiden can transform it in a matter of seconds.

Four years after the conclusion of Metal Gear Solid 4, Raiden's cyborg-strength is under the employ of a private security firm hired to protect a peaceful and influential African prime minister. His convoy is intercepted by two cyborgs representing the disruptive Desperado Enforcement, and they quickly make a mess of things by kidnapping their target, disabling Raiden, and slipping away unharmed. Not one to stand idly by, Raiden pursues his assailants after receiving the latest cybernetic upgrades from his comrades at Maverick Consulting.

It's a brief yet satisfying ride through a fast-paced action game, and dozens of unlockable rewards continually entice you back into the fray. With its addictive combat and killer sense of style, it's unfortunate that the simplicity of Revengeance's underlying story fails to hit many high marks. Outside of a few memorable antagonists (Sam, for instance, is a sadistic delight), you won't walk away with fond memories of the overall plot, but Raiden's personal transformation reaches an atypical and invigorating conclusion. He's perfect for the role of the antihero, and through his transformation, Revengeance emerges as a fantastic action game set in the Metal Gear universe.

Raiden faces hundreds of cyborg soldiers and biomechanical contraptions while searching for the Desperado elites, and despite a mostly mundane selection of environments, the excitement of taking on sword-wielding, rocket-launching foot soldiers holds your attention from the very start. Enemies don't waste time during battle, and though Raiden's no slouch, it will take considerable practice to completely realize the potential of his various attacks. He's fully capable of bolting through a crowd without taking a scratch, but he's bound to falter in the hands of a novice. Yet regardless of your initial skill level, Revengeance is an accessible action game that emphasizes entertainment without overshadowing the importance of depth and nuance.

Beyond the flow of combos and timely parries, Raiden can enter a heightened state of awareness known as blade mode by siphoning electrolytes from his enemies. You can choreograph precise slices that tear through weakened objects and enemies with as much accuracy or desperation as you desire. Tapping light and heavy attack buttons unleashes a flurry of horizontal and vertical slices, with the right analog stick dictating controlled cuts along a projected vector.

Hitting an enemy's sweet spot, indicated by a pink icon, initiates Raiden's Zandatsu technique. Reaching into his opponent's torso, he tears out the spine-like repair unit, crushing it in the palm of his hand with a push of a button. It not only replenishes his health and electrolyte reserves, but it pronounces his deep-seated ferocity.

Performing the Zandatsu doesn't require a lot of effort on your part, but if your initial trajectory isn't quite on point, small adjustments with the left analog stick may be required. It's usually a simple procedure, but some boss battles require you to find the right pitch and angle under considerable pressure, and it can be a bit of a headache, and frankly a bore, to attempt these same sequences over and over again if you should fail. Such precise demands slow down the pace of combat, one of the game's strongest characteristics.

The merits of speed wouldn't shine if it weren't for the game's consistent frame rate. Outside of loading sequence stutters, Revengeance almost never skips a beat. Deforming models in direct relation to your strikes calls for heavy calculations on the fly, and it's nothing short of a technical marvel that the game's high frame rate doesn't choke in the process.

As good as the console versions look, the PC port’s graphics are clearly better on a strong gaming machine. With shadows set to high, motion blur enabled, and MSAA x8 applied, Rising's visuals are close to what you might expect from a next-gen console such as the PlayStation 4 or Xbox One. The PC version is also capable of running at a consistent 60 frames per second, and though the resolution setting is capped at 1920x1080, it's better than the console versions, which are limited to 720p. Rising isn’t going to raise the bar for PC visuals, but it’s a great looking game on its own terms. Plus, with powerful enough hardware, there are fewer limits on the number of times you can divide an object, or enemy, in Zandatsu mode.

Raiden can capably whittle his way through most objects, from chain-link fences to armored plated tanks, but your happy-go-lucky slicing eventually collides with the cold reality that not everything is destructible. You can thank Revengeance's linear design for these boundaries, but the limitations are only a minor distraction from the enjoyment of decimating foe and prop alike.

Precisely controlling Raiden's katana plays an important role when attempting to remove individual limbs, an optional yet rewarding tactic. Reducing your enemies to limbless worms renders them disabled, potentially allowing for a no-kill playthrough (with a few scripted exceptions). More importantly, 30 specific enemies possess valuable stores of data in their left hands. For every 10 of these hands that you acquire, a powerful new upgrade appears in Raiden's customization menu. It's a task easier said than done; weakening and cutting off a specific limb from a specific enemy can be frustrating when you're surrounded by a half dozen others. You may find yourself resetting to the last checkpoint to take another crack at the challenge, but the payoff is worth it in the end.

Your accuracy and timing in blade mode is somewhat dependent on the camera's position, and though you can usually rely on it to serve your needs, it occasionally misses a step and loses track of the action. For example, locking onto enemies in a cramped environment doesn't always produce the best results, and the same can be said for the one rare Zandatsu out of a hundred when the camera abandons all logic and orientation. It's frustrating when it occurs, but it doesn't represent the camera's overall positive qualities. Given that Raiden is invulnerable during these animations, it's worth having complex shows of technique in spite of the rare temporary defect.

Raiden performs these brutal acts in the name of justice, while his enemies simply lust for war and profit. The intriguing twists that made other Metal Gear plots increasingly interesting are almost nowhere to be found, but Raiden's personal transformation manages to keep the ship afloat amid the sea of narrative mediocrity. Outside of providing for his family, he views his violent line of work as a means to protect the weak, but in a world where absolutes are a myth, there may be more to his motivations than even he realizes. His opponents repeatedly challenge the notion that justice is his sole desire, questioning whether his stated motives are nothing more than controlled excuses to commit violence. Could it be that he's unwittingly perpetuating the lessons he learned as a child soldier under the guise of justice?

This is the biggest question Raiden must answer throughout the course of Revengeance. During the best moments, his internal struggle is matched in tone and pace by the gameplay to great effect. With his confidence shot, he's like an injured animal struggling to find a foothold. Conversely, when his violent tendencies emerge, his tone shifts and the game thrusts you into visceral moments filled with rage, torment, and unrestrained dismemberment. His satisfaction with committing such brutal acts stands out, and the moment he wrenches the repair unit from his foes, he turns into a seething, bloodthirsty predator. It feels natural to share in his pleasure of putting the exclamation point at the end of a hard-fought battle.

Your battles against the heavyweights, the four members of the Winds of Destruction, take place in large outdoor arenas. On the normal difficulty setting, these face-offs are fairly easy to navigate on your initial attempt, but they're entertaining diversions nonetheless. Each boss battle concludes with a mix of cutscenes and quick-time events, ultimately throwing Raiden into blade mode to deliver the final blow. These moments of excess occasionally elevate the thrill of victory, but they usually diminish the sense of accomplishment by serving the boss to Raiden on a silver platter.

The best face-off occurs between Raiden and his rival the Brazilian cyborg samurai Samuel "Jetstream" Rodrigues. It's this relatively simple clash of swords that culminates in the most straightforward yet rewarding conflict in the entire game, and despite Sam being a rather unexciting rival, he manages to leave a lasting impact on Raiden's psyche.

Trademark elements of the Metal Gear Solid series survive Revengeance's otherwise revolutionary transformation. Even the stealth meter managed to sneak its way into the game, and while it may not carry as much weight as it once did, it allows Raiden to silently dispatch unaware enemies. You can still kill time perfecting your skills in VR missions, or if you prefer, by engaging your Maverick cohorts in sprawling codec conversations that take entertaining turns into unsuspected directions. They're examples of the palpable Metal Gear spirit that permeates an otherwise unconventional entry in the legendary stealth series.

Revengeance may not play like a typical Metal Gear game, but Raiden's character arc justifies almost every change to the old formula. It's a beneficial dynamic, and the game's biggest success overall. It ultimately tests the hypothesis that there's more to the series than just Snakes and sneaking behind enemy lines, and for the most part, it passes the test. The story may not wow you with its political trappings, but Raiden's transformation and the gameplay that springs from it are the most alluring reasons to give him another shot as the leading man.

The PC port comes with every bit of Rising's console downloadable content in tow, which includes 50 challenging virtual reality side missions and a few alternate costumes for Raiden. The bite-size VR trials give you an excuse to explore your skills in swordplay and the use of sub-weapons in unusual settings, and you even get to control some of the game's vehicular enemies for the first time. The appeal of these diversions depends on your desire for more action, on top of the generous heap already provided by the main story mode.

Rising plays great, no matter your platform of choice, but with greater control over the game's graphics, and with the preloaded DLC, the PC port is easily the best version out of the three.If you're even vaguely interested in the Metal Gear series or intelligent hack-and-slash games, do not pass up a chance to play this exciting and addictive hybrid.

View Comments (1105)
Back To Top
8
Great
About GameSpot Reviews 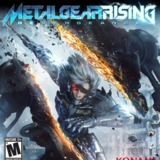 Peter Brown has been writing about video games and hardware since 1999. He grew up with the NES and has an unwavering love for retro and arcade games. Though he's a New England native, he's called the Bay Area home since 2004.