Mercenaries is dense with explosive content that satisfies on a fundamental level.

The near future, it seems, is a great place to have a pretend war these days. Mercenaries marks the second imaginary modern military conflict that Pandemic Studios has cooked up over the past six months, though Mercenaries is a much more action-oriented, hands-on experience than last year's Full Spectrum Warrior. It's also a much better game overall, partially because its rather grim premise comes along with a nod and a wink, and also because it provides fiery, visceral thrills at a breakneck pace.

Mercenaries looks an awful lot like a Grand Theft Auto knockoff at first blush. While it does share some elements with Rockstar's free-form criminal action series--such as the third-person perspective, the ability to hop in and out of any vehicle you see, and an irrepressible enthusiasm for explosive chaos--Mercenaries is much more linear and mission-based, though it's up to you to decide which missions to accept. Your abilities don't stray too far from the norm for a third-person action game, and the basic controls all feel pretty familiar and responsive. You'll be driving (or flying) a bevy of vehicles over the course of the game, and though there is a world of difference between how a light jeep and a heavy APC handle, most of the ground-based vehicles feel a little too floaty. The trade-off here is that the exaggerated physics that account for the odd handling of the vehicles also make the game's many, many explosions much more thrilling. The contents of the missions are pretty standard, requiring you to fend off enemy forces from tactically important locations, steal or destroy enemy equipment, assassinate enemy officers, level enemy structures, and the like. But the immersive nature of the game's world keeps things interesting, and around the time you find yourself getting comfortable with the game, it'll start cranking up the challenge, bombarding you with enemies and introducing multiple-part missions.

The game takes place in a ripped-from-the-headlines version of North Korea. After North Korean president Kim begins to see the upside of democracy, he's quickly assassinated by his son, General Song, in a coup. General Song then gets busy starting up a bevy of WMD programs and dealing the weapons they produce to terrorists. As soon as this comes to the attention of the rest of the world, North Korea quickly finds itself infested with Allied Nations forces looking to dismantle Song's dictatorship, Chinese forces looking to incorporate the war-torn country into the People's Republic, South Korean forces (under the unofficial guiding hand of the CIA) looking to reunite the halves of the fractured Korean Peninsula, and Russian Mafia forces just interested in getting paid.

You play as one of three mercenaries working for a company called Executive Operations, each of whom has a specialty--the lithe British agent prefers covert ops, the lone-wolf American can sustain more physical damage than the others, and the crazy, gruff Swede has a propensity for using excessive force. These differences can impact the action in a minor way, but a more interesting difference is found in the various languages they are able to speak, as this can affect whose conversations they're able to understand, and what you know can be a big factor in deciding how you'll align yourself with the different factions.

Though you're given the basic ethical guideline of not murdering civilians (it's bad for company PR), you're free to play the field however you see fit, doing jobs for the different factions--sometimes against North Korean forces, sometimes against another faction, and often a little bit of both. Your primary objective is to collect the bounty on General Song, though you'll need to work your way up through the "Deck of 52," a series of North Korean officials, military officers, and businessmen that the Allied Nations forces have assigned playing-card designations to, to get to him. It's amazing how close the game scrapes to reality without actually breaking through, and its use of a slightly fictionalized North Korea as a setting can be a little unsettling at times. But despite the game's commitment to a quasirealistic scenario, the action is fast and loose.

One of the more unique and interesting aspects of Mercenaries is the nature of your interactions with the different factions. Though you'll often be acting against North Korean forces, which are always hostile toward you, there are missions where you'll have to attack one of the four factions you've been working for. Your working relationship with each faction is represented by a "mood" meter that ranges from friendly to hostile, and a hostile faction won't be as interested in offering you assignments as it will be in riddling your body with shrapnel. Who you choose to keep happy will not only affect how you gather your intel on the Deck of 52, but it will also determine which missions will even be presented to you. Luckily, Mercenaries exists in a world of moral flexibility and short memories, and you can always put yourself back into the good graces of a faction that's upset with you with a healthy bribe. There's extra incentive in keeping the Russians happy, since they run the Merchant of Menace Web site from which you can purchase equipment and vehicles and have them air-dropped to you in the field, as well as heavy weapons support from artillery and bombers and the like. If they're mad at you, they'll cut off access. With three different characters to play as, four different factions to piss off, and 52 bounties to capture (many of which are optional), there's a great amount of replay value to be found here, though playing through the game once is a good 20-hour experience in and of itself.

Mercenaries is, generally, pretty forgiving in nature. The auto-aim function allows for a pretty wide margin of error, and you'll often find a convenient crate full of health and ammo when you need it the most. The AI in the game, both friendly and hostile, isn't incredibly cunning, but it's aggressive, and it's smart enough to run away from live grenades and to man nearby vehicles rather than stay on foot. Neither side is an incredible shot with a rifle, but it doesn't really need to be when it's coming at you with a rocket-propelled grenade or a heavily armored tank. When Mercenaries wants to present you with a challenge--and it will--it will simply throw an overwhelming number of enemies at you from a well-fortified position.

Though collecting bounties and gathering intel from the various factions are your primary objectives, there are plenty of side jobs you can take at will, and these range from simple checkpoint races to escorting a news reporter to an especially intense firefight. There are also standing offers that can help you curry favor with different factions. For example, the Chinese don't like the "listening posts" that the South Koreans have planted all over the place, and will reward you for destroying these surveillance devices. The South Koreans themselves don't much care for the presence of the large, aggrandizing statues of General Song that punctuate the landscape, and are made happier when you blow them up. The pacing of Mercenaries is relentless, and this is largely due to the incredible volume and variety of tasks you can take on.

Mercenaries puts a lot of stock in smoke, fire, and explosive effects, and these elements tend to dominate the screen for most of the game, which is great, because they're executed with incredible aptitude. The sky is almost constantly choked with a smoky haze, and the landscape is fundamental in giving you a sense of this war-torn country, but the game avoids becoming monotonous by providing subtle variations on this theme in different regions of the map. Part of what makes Mercenaries so engaging is the seamlessness of the landscape, and the fact that the game keeps load times to an absolute minimum--basically, the only times you'll see loading screens are before and after assignments, and when you die. But it doesn't sacrifice the quality of the graphics for scope, and all the characters and vehicles have a good look to them that, like the story, aims just to the more dramatic side of realism. There are some awkward pieces, such as the canned animations for when you subdue an enemy and your silly-looking jump animation. They're distractions, but they're usually overwhelmed by the game's grossly over-the-top action.

The visual quality of the game, along with the load times, account for the only significant differences between the Xbox and PlayStation 2 versions of Mercenaries. The game pushes the PlayStation 2 hardware pretty hard, and it gets a lot out of Sony's aging platform in the process, but the Xbox simply handles the load better. We noticed shorter load times, a better draw distance (though this is really apparent only when you're in a chopper), cleaner textures, a higher, more stable frame rate, nicer special effects, and slightly better animation. Not to marginalize the PlayStation 2 version, which is still a ton of fun and completely playable, but those with the ability should unquestionably go for the Xbox version.

There's virtually no difference in the quality of the sound in the two versions of Mercenaries, which is good. The voice cast of Mercenaries is the backbone of the game's sound design, delivering solid, believable performances that fit snugly into the characters. The best performances, though, come from Peter Stormare (the wood-chipper guy from Fargo and nihilist from The Big Lebowski), who plays the gravelly-voiced Swedish agent to a T, and from Carl Weathers (aka Apollo Creed and Action Jackson), who was born to play the part of the tough-as-nails Army commander that he voices here. The game is good about creating atmosphere with ambient sound, though when it really wants to get your blood up it'll kick in with a powerful, urgent orchestral score, a haunting choir of voices, or the driving sounds of big Asian drums. The quality of the sound isn't this great across the board, though. Some of the weapon reports feel a little flat, many of the engine effects don't sound as throaty as they ought to, and tires will often squeal even when you're rolling across dirt roads.

Mercenaries is dense with explosive content that satisfies on a fundamental level. Of the games that have tried to borrow the Grand Theft Auto style of play, Mercenaries is one of the most successful. This is partially because Pandemic clearly understands the importance of peripheral action to creating a cohesive, believable world, but also because it infuses the structure with its own style, and in the process turns it into something of its own. This is the most accomplished game that Pandemic has created yet, and it's an engaging experience that should appeal to action fans looking for a good, messy thrill. 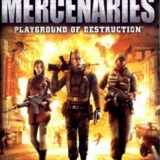