Serious challenge is what Men of War: Assault Squad is all about. This tactical real-time game from Digitalmindsoft is something of a crueler version of similar games such as Company of Heroes and Codename: Panzers. Like the original Men of War that became a cult hit in 2009, this take-no-prisoners sequel boasts a rigorous attention to realism geared toward confounding tank rushers with no understanding of combined-arms tactics. In other words, you really have to know what you're doing to avoid the fate of having your name carved on a cenotaph back home in 1945. If you're up for a grueling yet satisfying slog through Tom Brokaw's war, this is a great way to kill some more Nazis on your nights off.

The basics of Assault Squad fit in with the likes of its WWII real-time strategy predecessors. The structure of the game is simple, and the interface is so intuitive that you don't need to refer to the manual or go through a tutorial (which you don't get anyway). Scenarios are tackled by starting at the south end of the map and blitzkrieging your way to the north, blowing apart progressively tougher enemy troop emplacements and fortifications as you go. If you capture flag-bedecked strategic points on the battlefields, you're rewarded with unit points that you can use to order up new troops, tanks, mortars, and naval bombardments.

And that's pretty much it. There are no bases to build or resources to manage other than the points needed for reinforcements. Battles are available in two flavors. Skirmish features 15 huge one-off scenarios where you lead the troops of the USA, Commonwealth, Soviet Union, Germany, or Japan against their respective enemies. Settings range from wartorn France in the wake of the Normandy invasion, to the bleached-out deserts of North Africa, to the jungles of Southeast Asia. You can also take the fight online. There are three versus battle modes pitting as many as 16 players against one another on massive maps, along with a new cooperative mode where you work together with up to three friends on missions against the AI. The latter is Men of War at its best, since you wage joint warfare that emphasizes the combined-arms teamwork design of the entire game.

And the game doesn't pull any punches with its combined-arms focus. You cannot win battles in Assault Squad by simply band-selecting a bunch of tanks or troops and hurling them at the enemy lines while the generic RTS martial music stomps away in the background and your soldiers holler battle cries like "That one's for Uncle Sam!" While you might roll Stuarts over the odd little guy, opposing infantry comes with antitank grenades and rocket launchers that can shred your supposedly mighty armor columns in mere moments. So you have to use all of your resources, switching from basic infantry to antitank specialists to tanks to mortars to snipers to elite nation-specific units like the Rangers and the Red Guards as the occasion fits. Strategic planning is also vital. Using every scrap of scrub, broken wall, and flaming half-track for cover is crucial to keep your lads alive and fighting for God and country. It's easy to duck and cover, too, because the interface automatically shows you ghost positions of troops behind the selected terrain before you issue any orders. Do this smartly and keep one move ahead of the bad guys with flanking maneuvers, and you just might live long enough to get a Dear John letter from back home.

Battles play out a bit like addictive rock-paper-scissors puzzles where you're always searching for the right tactics to use in the right situations. You aren't locked into solitary solutions, however. The sheer variety of units that you can deploy, along with the amazingly detailed layout of the destructible maps, means that every enemy position can be taken out in almost limitless ways. Vehicles can be repaired, enemies can be looted for hardware, buildings can be occupied for firing positions or destroyed to clear a shooting angle, and so on. Enemy AI is fantastic as well. While you have to take a few moments to think about your next steps, you can't spend too much time sitting around because aggressive enemy forces quickly zero in on your location and obliterate it. Some of the moves that the enemy can pull off are nothing short of astounding. Enemy forces are ruthless and not above resorting to desperate measures in desperate situations. For instance, Nazis might send armored cars on suicide missions that roll over mortars to destroy them before being blown apart by the SAS. So when you do win a scenario, you get a great flush of accomplishment found more often in cerebral wargames than in blow-'em-up RTS affairs.

At times, however, battles have to be fought a little too meticulously, and micromanagement is often necessary. You need to place single troops on captured guns, split squads up to repair vehicles, and even call out the odd unfortunate grunt to make a suicide run toward enemy pillboxes or armor that you can't take out in any other fashion. This results in some fantastic moments, but it also drags missions out. Enemy aggressiveness can be over the top. Tanks and troops flow into the fray from offscreen so often in some missions that you find yourself refighting battles for strategic points over and over again. It's a somewhat realistic setup that forces you to station troops at vital locations or lose them to the enemy, but it also means some tedium because you have to take a cautious approach to every move you make. Instant enemy reinforcements also seem like a cheat. You finally get a sector of the map pacified and turn your attentions elsewhere, and whammo! Here come a couple of panzers and some pals in army boots from beyond the fog of war at the edge of the screen. This can be an annoyance in the single-player skirmishes because the maps are huge and the action typically takes place on at least two or three fronts simultaneously. In some ways, the missions here are geared more for the co-op mode than for going it solo because at times you really need a buddy to watch your back.

When you get right down to it, Men of War: Assault Squad is a tactical WWII RTS game for those who have mastered the somewhat easier-to-handle Company of Heroes. This is a challenging battlefield experience somewhat closer to a wargame than to a traditional RTS game and as such is geared to more of a hardcore crowd. It isn't such a great option for tank rushers who don't have a lot of time to spare to learn combined-arms intricacies. Be aware of these demands going in, and you will have a great time refighting this war. 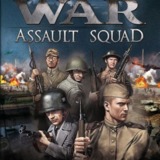