The bad old days of movie tie-in games are back. MIB: Alien Crisis is an on-rails third-person shooter that is boring to play and ugly to look at. The musty dialogue fails to reproduce any of the charm of the movie franchise, and you can see everything the game has to offer in the span of an afternoon. This creaky relic of the past retails for full price in the present, making it one of the most shamelessly exploitative games in recent memory.

You play as a disgraced archaeologist turned art thief turned man in black, Agent P, who joins the agency after stealing an alien artifact for the villain, the improbably named Emilio Chauncy. Agent P's sardonic attitude is clearly modeled after Agent J (played by Will Smith in the movies), but his attempts at witty irreverence fall flat. The by-the-book female agent you pair up with is a bland foil for jokes about authority and increasingly flirtatious banter, but the hackneyed writing utterly fails to capture the humorous juxtaposition of nonchalance in the face of the bizarre that serves the movies so well.

With the hope of humor dashed, you are left to rely on spectacle and gameplay. Alas, Alien Crisis is an unattractive game that would have looked dated years ago. Homely character models waggle their mouth holes during cutscenes, and the barren backgrounds offer precious little distraction. Action sequences are a visual mess of bright, blurry projectiles and explosions, and your clumsy-looking alien enemies are covered in a milky sheen.

There's nary an echo of the slick visual style of the movies, and so you are left with the gameplay. As in most light-gun shooters, you progress automatically to the next point in the level when you defeat all the enemies at your current point. At any given location you can jog between two or three cover positions or just hang out in the open and fire away. Moving is a good way to avoid grenades and get a better angle on some enemies, but you can usually clear most foes from a stationary position.

Using the analog stick, the PlayStation Move, or the Top Shot Elite, you slide your reticle around the screen to target your weak alien enemies. Baffingly, there is no way to invert your aim, so if you only have a controller and like your down to be up, you're out of luck. Your small arsenal consists of a few unremarkable guns (the iconic noisy cricket being an explosive exception), as well as a few attachments that add a bit of variety. You can freeze an enemy and shatter him, use an antigravity grenade to lift a group of foes into the air, or slow down time temporarily. The most versatile attachment lets you encase enemies or innocent bystanders in a bubble that you can then shoot it to make it bounce around the area and kill foes.

Yet even with mildly interesting attachments, it's all very boring. Enemies move at an unhurried pace through open spaces, making it easy to spot and eliminate them. You face only about a half dozen different foes, who perform the same few actions (take cover, shoot, reposition), so repetition quickly sets in. By using attachments or spamming your scoped weapon, you can increase your score multiplier and drive your score even higher, but seeing bigger numbers pop out of downed enemies doesn't make the dull action more lively.

When you aren't shooting away willy-nilly, there are short stealth sections in which you must shoot security cameras and trap baddies in bubbles. Wait for the cone of vision to pass, shoot the camera, bubble the alien, move on. Inconsistent detection means you might get caught doing the thing you got away with moments before, but frequent checkpoints keep these setbacks from being more than mildly irritating. Car chases through (or rather, above) the streets of New York City provide some faster-paced action that, while inoffensive, is far from exciting.

Other attempts at gameplay variety are more irksome because they drag on much longer. Investigation sequences have you walking around a small area at a snail's pace, hovering your scanner reticle over anything that glows. This could have been a good place to bring in some humor or fantastical alien mythology, but save one or two interesting descriptions, the writing and dialogue here are as lifeless as elsewhere. Ditto for the conversation sections. The occasional choices you must make are neither interesting nor impactful, leaving you to wait through lengthy dialogue, desperate for a humorous morsel that never comes.

Despite this padding, you can complete the story mode in about three hours. There are timed challenges with target scores to shoot for, and you can run these split-screen with a friend or take turns competing with up to four players locally. But this is the same bland shooting action from the story mode, and the prospect of competition does little to enhance it.

All of this boredom and blandness is exacerbated by the fact that MIB: Alien Crisis frequently subjects you to loading times in excess of 30 seconds, leaving you to wonder what exactly it's working so hard on. But perhaps the most egregious offense is that the game is currently retailing for full price. Even with the included voucher for money toward a movie ticket that may or may not be redeemable in your area, this is a shockingly high price. Fortunately, it makes your decision easy: Don't buy this game. 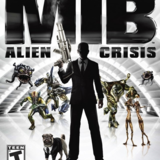