Mega Man ZX offers a familiar but refined combination of action and platforming that will challenge even the most seasoned Mega Man veterans.

Mega Man ZX isn't the first Mega Man game for the Nintendo DS, but it's the first to bring the tough-as-nails, side-scrolling action the franchise is best known for. As the first action adventure Mega Man on the dual-screen handheld, Mega Man ZX doesn't force any touch-screen gimmicks into the game, but instead relies on a proven template lifted from the Mega Man Zero series on the Game Boy Advance. The result is a rewarding game for dedicated action-game fans, but also one that can't quite shake the feeling of familiarity.

In Mega Man ZX you can choose to play as a young boy named Vent or a girl named Aile. The two characters play slightly differently, and each one has unique story scenes throughout the game, but for the most part it doesn't matter which character you choose. You are a courier for a delivery company known as Giro Express. One day when transporting a shipment of a material known as biometal, you are attacked by evil robots known as Mavericks. In the scuffle you are exposed to the biometal, which gives you the ability to transform into Model X, a basic Mega Man prototype with a blaster and increased mobility. Since you can't do much in your human form, you'll spend most of the game in the Model X form. However, there are several different Model X forms, which you unlock by collecting new types of biometal as you progress through the game.

The setup is similar to a Metroid or Castlevania game. Instead of starting at the beginning of a level and moving to the end, you are free to explore an entire maze of interconnected corridors and rooms at your leisure. There are data terminals located throughout the world where you can accept missions. You're given a choice as to the order in which you complete them, but you can work on only one mission at a time. The game isn't quite as open-ended as it sounds, because to reach certain parts of the world you need to visit other areas to defeat bosses and collect power-ups. For example, to get to a particular section, you might need to go through a purple door, which you can't do until you've obtained the purple card key, which you can't do until you've defeated a specific boss. In this way the game is still fairly linear, although you're still free to explore and collect items and discover secrets, albeit in a limited capacity. This structure works well, although it can lead to spending an inordinate amount of time aimlessly wandering around as you look for the area you need to visit next. It also doesn't help that the in-game map simply shows several blocks to designate each area, rather than a detailed map that might actually be useful.

The most interesting part of the game is the Model X transformation mechanic. There are five different models to choose from. Essentially these different models are like different suits that you can equip on the fly to access new traits and abilities. There's a model with a saber and a blaster, a model that can fly for short distances, a model that allows you to throw a constant stream of deadly projectiles, and more. Because of the way the levels are arranged, you're rarely forced to use one specific model, although there's usually a clear advantage for one type over another. Often the key to getting past a particularly difficult area is simply trying it with a different model. The same is true for the game's many boss battles, as the bosses usually have unique weaknesses to specific types of attacks.

The level and enemy designs are typical of Mega Man games. You'll see a lot of difficult platform jumps, spikes that kill you instantly, hazards like exposed electrical currents and grinding gears, and all sorts of enemy robots with unique weaknesses and attack patterns. Each area of the world has a different theme. There's an abandoned theme park; a dark, creepy forest; a manufacturing plant with cogs and assembly lines; and even a town area with regular, human inhabitants that you can talk to.

Some of the levels are deviously difficult even on the easy setting, with blind jumps galore and enemies that reappear almost as soon as you kill them. Each area also has a miniboss fight, as well as a much more difficult boss battle at the end. The problem is that the save points in Mega Man ZX are few and far between, so if you expend all your lives battling a boss--or worse yet just getting to a boss--you have to do it all over again from the beginning. Since you usually have only a couple of lives, you'll invariably end up covering the same ground and fighting the same boss several times before finally completing the mission. The gameworld is quite large, and it can take a long time to run from one area of the map to another. The save system certainly compounds the difficulty and extends the time required for you to play the game, but it's also often aggravating, especially if you're able to play only for a few quick minutes at a time. If you've played the Mega Man Zero games, you'll be at an advantage here, but with the normal and hard difficulty settings there are still more than enough challenges that will put your thumb speed and dexterity to the test time and time again.

Mega Man ZX makes little use of the unique features of the Nintendo DS. All of the action takes place on the top screen, while the bottom screen displays a range of information depending on which model type you're currently using. Most of the information isn't very useful, and, in fact, sometimes you won't see anything but a simple logo on the bottom screen. The touch screen isn't used for the most part, but that's a good thing given the nature of the game. The precision and timing required of you in Mega Man ZX mean that your full attention is required on the action on the top screen. So although there's little to no use for the bottom screen, you won't ever have time to notice, and the game doesn't feel lacking as a result.

The presentation in Mega Man ZX looks good, but it isn't much of a step up from the Mega Man Zero games on the Game Boy Advance. The levels are all colorful and bright, with backgrounds that seem to stretch on forever in some cases. It's great to see visual touches like dark thunderheads looming large over a futuristic cityscape in the background, and the level of detail in each area is impressive. The enemies are typical of Mega Man games, with everything from annoying little dragonfly robots, to armored turrets, to giant bulldozers that fill up half the screen. Each of the X models that you can transform into has a unique look, mostly designated by color. Since there are several models, there are quite a few attack animations and effects for your character. None of the attack effects are impressive or even interesting to look at, though, which is somewhat disappointing given the apparent strength of each attack. The result is a repertoire of all-too-similar attacks that don't feel powerful and aren't nearly as gratifying as they could be.

The sound is marked by some excellent music that keeps pace with the action throughout the game. Each area has a special theme, and some of them are good enough that you'll want to revisit a specific area just to hear the music again. There's also a little bit of spoken dialogue during a few of the cutscenes. However, it's all in Japanese. It sounds good, but with such a small amount of dialogue to work with it wouldn't have been difficult to include English versions of the voices as well.

Mega Man ZX is a good game with plenty of challenge to offer fans of the series. Newcomers will find the game to be a harsh introduction to side-scrolling action games but should still be able to get by on the easiest difficulty setting. If you know what you're doing and don't spend too much time dying or wandering around the world, you could easily finish Mega Man ZX in four or five hours. However, with the multiple playable characters, difficulty settings, and secrets to find, you could easily spend twice that much time with this game. This game won't change the way you think about Mega Man, but it will remind you of why the series continues to garner new fans with each installment. 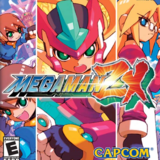 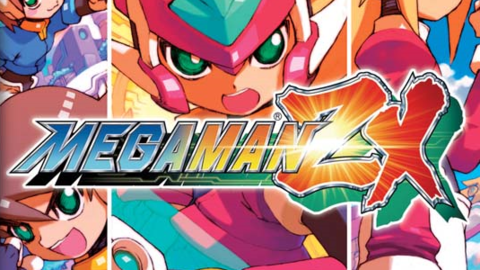 Mega Man ZX returns to the original 2D side scrolling action, with a new cast of characters and a choice of heroes.